Who are evangelicals and who are they really voting for?
Ed Stetzer 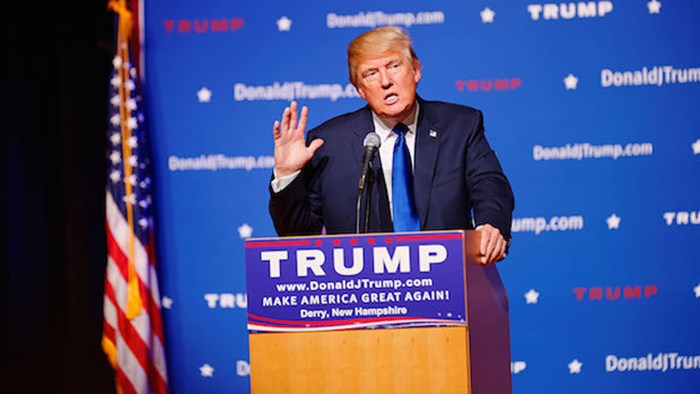 It can be rather tricky.

There’s been a bit of a disappointment among some evangelicals seeing this reported support. Some seem to be coming up with any reason as to why Donald Trump must not really have this kind of support. Well, he really is—depending on what an “evangelical” is.

When you look at it, there is what we call a correlation. The more you go to church as an evangelical, the less likely you are to vote for Donald Trump. In South Carolina, for instance, much was made over the 34% of self-identified evangelicals who voted for Trump. Somehow overlooked is the corresponding fact that ~66% didn’t vote for him.

Doctoral candidate Matthew MacWilliams has written on the subject of support for Trump among voters he classifies as “authoritarian.” But, among those he might expect to find as Trump supporters there is a clear “soft spot”:

Regular, weekly church attendance—as measured by a standard Pew Research question included in my survey—predicted a statistically significant and substantive opposition to Trump.

However, that’s not the whole story.

Trump is the Highest AMONG WEEKLY CHURCH-GOING ATTENDEES

In a recent article published in the Washington Post, the title explained, “Where is Trump’s evangelical base? Not in church.”

But, the graph below (from WAPO) tells a different story.

Trump was chosen by more church going evangelicals than anyone else.

In other words, the most frequently chosen candidate of church-going evangelicals was Donald Trump.

Trump’s support declines with church attendance, but he is still the highest among church attendees, which the title of the article might have caused the reader to infer otherwise. 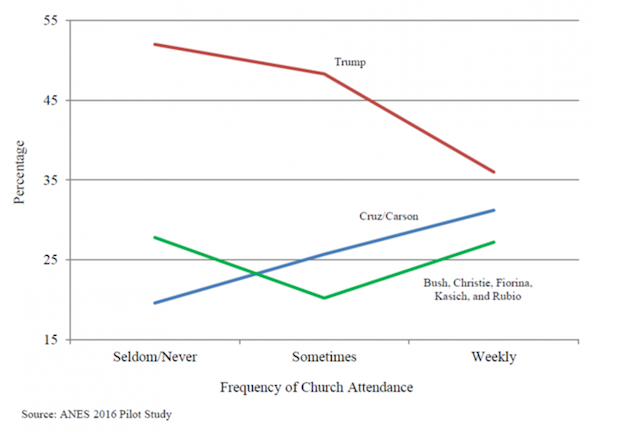 The graph tells both stories. For the decline by attendance, follow the trend line by church attendance across the top. But, to see how Trump still wins more evangliecals than anyone else, look at the lines on the far right.

Some may assert the exit poll question, “Would you describe yourself as a born-again or evangelical Christian?“ is too broad, but that’s what happens when the definition is—for all intents and purposes—undefined or so amorphous as to mean anything. (This lack of clarity is why LifeWay Research and the National Association of Evangelicals sought a more accurate research definition.)

The correlation between church membership and a decreased likelihood of voting for Trump is especially apparent in the Upstate, where people are two or three times more likely to go to church regularly…and were half as likely to vote for Trump. There are individual county results that don’t fit the pattern, but there’s a clear line of best fit when you scatter plot the data. Counties with lower church adherence tend to have a higher percentage of Trump supporters. 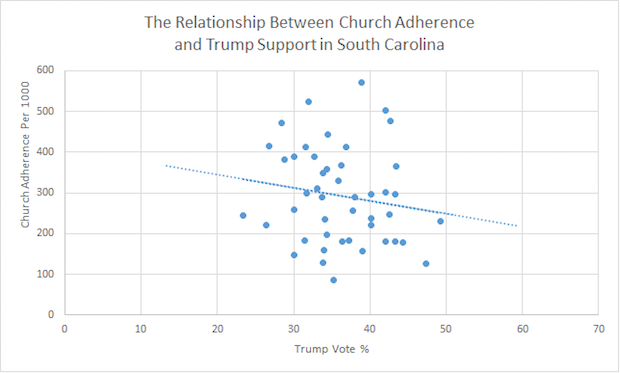 While Trump has often won a plurality of evangelical Republican primary voters, he has not won the majority. On Super Tuesday alone 51% of evangelicals voted for either Ted Cruz or Marco Rubio.

As Guerra notes in the First Things article above,

[W]hen one takes a closer look into the numbers it becomes clear that Trump does not come out on top among those voters for whom the religious faith of the candidate matters most. Voters in all the southern states except Oklahoma were asked, “How much does it matter to you that a candidate shares your religious beliefs?” Among those that responded “a great deal” Trump did not receive even a plurality of their votes.

Again we see those for whom religious faith is important enough (as with regular church goers), Trump does not dominate, but he often leads.