There is a common idea today that young evangelicals are liberating themselves from conservatism, but is that true?
Ed Stetzer 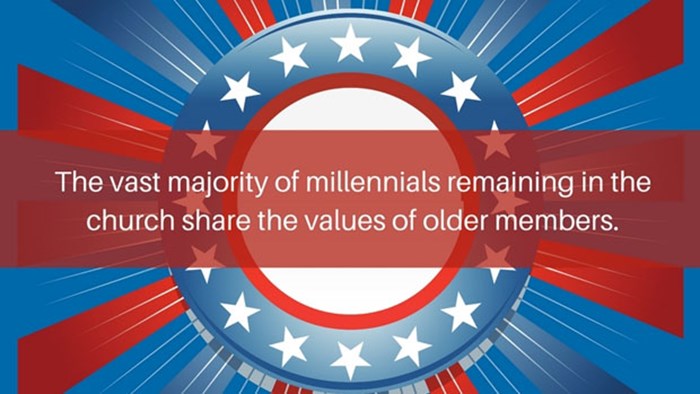 We can’t seem to turn on the news or log on to our social media outlets without being inundated with coverage and/or commentary on the 2016 U.S. election. Suffice to say, this year’s election seems to be one of the most heated in recent U.S. history. People are planning to vote outside of their typical political lines for a variety of reasons.

But when we look at the data of where people stand objectively in terms of political parties, issues, and such, we find some interesting trends. The research below may be a few years old, but I believe it is relevant on a broad scale today as well.

The young, restless, and… liberal? Are younger evangelicals really more left-leaning than their parents? The easy answer is, “Of course they are! Look at how many of them are voting for pot legalization and driving those tiny cars!”

But not so fast—the swerve into liberalism may not be as drastic as we think, according to a study from 2010 conducted by Buster Smith and Byron Johnson of the Institute for Studies of Religion at Baylor University.

They found some fascinating data that shows young evangelicals may not be as liberal as we think.

Are Young Evangelicals Less Likely to Associate with the Republican Party?

As we stated above, the first hypothesis Smith and Johnson had was that young evangelicals were less likely to associate with the Republican Party. Is that true? Not really, no.

Here are some key stats:

Here are the stats for the political affiliations of self-identified non-evangelicals by age:

I think it’s important to see the stark difference between young evangelicals and young non-evangelicals.

Some may point to a bit of disparity between young and old evangelicals, but it’s safe to say that however different they may be, young evangelicals look more like their parents than their non-evangelical peers.

After seeing the party affiliation data from the survey, I think it would be helpful if we looked at the political attitudes of young and old evangelicals and how they compare.

Here are the key stats:

Exactly 70% of young evangelicals identify as conservative, compared to 55% identifying as Republican. This may point to a sort of burden that comes along with associating oneself with a political party. It’s easier to be stereotyped when you take on the name of a party than when you simply identify with a particular attitude, like being conservative.

When It Comes to Issues, Where Are Young Evangelicals?

Here are some key stats indicating the views of young evangelicals on hot button issues:

This is where it is appropriate to say that we need to be careful with our data here. This report was released in 2010 and is based on data from 2007. It is fair to say that, in the last few years, it is likely that young evangelicals have shifted in their views a bit on some of these issues, namely ones surrounding homosexuality.

However, I still think we are safe saying that the moral and political views of young evangelicals are still more likely to line up with those of their parents than those of their non-evangelical peers.

It is easy to simply play “blame the millennial” for all the problems in the church and culture, but the statistics don’t bear that out. The vast majority of millennials remaining in the church share the values of older members. The much larger issue is that more millennials are becoming Nones and others are looking for spiritual fulfillment outside the church. Instead of critiquing the young adults who have stayed, we should be leveraging them to reach their peers.

Join the conversation on Facebook
Tags:
None
Posted:
August 10, 2016