The Narrative of Fear Surrounding Refugees: Preparing Ourselves for the Conversation 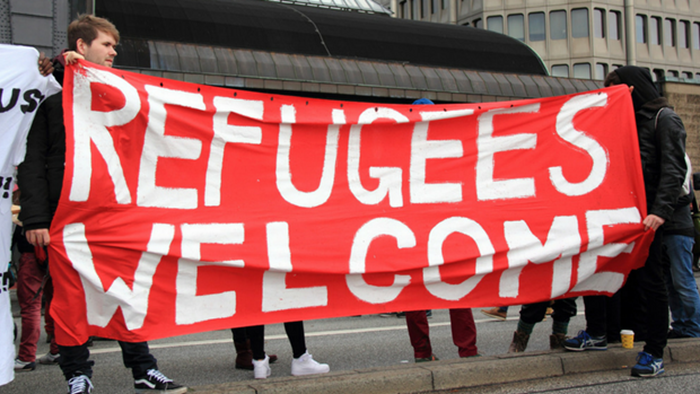 In this country fear has become a defining narrative, even among Evangelicals. It comes in many forms: fear of unemployment, fear of the unknown, fear of the infringement of rights—all concerning. But one in particular—fear of terrorism—has caused a unique problem when it comes to community and love of neighbor.

This fear has played a significant role in how we view ‘the other.’ Our fear of terrorism, and often of Muslims in general, has been perpetuated and exacerbated by the recent election. This includes the narrative of the incoming President-elect’s campaign, and even now, his appointment of several people to key positions of leadership.

A year ago, World Relief launched it’s ‘We Welcome Refugees’ campaign. A year ago, the Billy Graham Center hosted the GC2 Refugee Leadership Meeting and Summit. A year ago, caring for refugees was a key value for many Evangelicals.

And yet, less than 365 days later, 81% of White Evangelicals voted for a candidate who often advocated the rejection of refugees in favor of safety and consistency. And many people responded by listening to their fears.

But at the core of who we are as followers of Christ is a commitment to care for the vulnerable, the marginalized, the abused, the wanderer. It’s Advent and we look back to the time thousands of years ago when a husband and wife couldn’t find a welcome home to stay. Today, millions of people are in a similar position, having had to flee home, safety, family, and livelihood due to violence or poverty.

What is an Evangelical to do? We are to hold to the critical pro-life issues that we have always held to. And we must remind ourselves that being pro-life is about all of life from conception onward, from start to finish, and all the moments in between. We cannot say that we are pro-life if we turn our backs on those in need. And so we must circle back to the refugee crisis.

I currently serve as interim pastor at Moody Church in Chicago, the oldest Protestant megachurch in the world. It’s a church committed to missions, and specifically to working with refugees who are resettling in the Chicago area. Many churches still hold to this value of caring for the marginalized and needy.

And yet we have seen that many Americans, including some Evangelicals, have perhaps chosen themselves over ‘the other.’ They have allowed themselves to be swayed by the rhetoric that boasted the benefits of being anti-immigrant and anti-refugee. It seems that Americans are a welcoming and generous people except when they're afraid. Let me reiterate: fear has become a defining narrative and it has caused many to question their openness to refugees and immigrants.

So where do we go from here? How do Evangelicals who are committed to helping refugees interact with those who view the issue differently? Let me suggest three ways to prepare ourselves for the refugee discussion in the days to come.

The government will vote and decide who is received as a refugee. And we must advocate and pray for issues of justice and people who are being marginalized. But we must also acknowledge where we sit and move forward with eyes wide open. We don’t, and can’t, align with a government that doesn’t side with the vulnerable and seek ways to care for them. That is Christ’s mandate to His followers: to care for the widow and orphan.

2. We need to be prepared to tell our people that we care for refugees. We need to study the refugee process and be informed participants in the discussion. This is important because our words matter, and can help people think differently. Much of the wrong information embraced today is fueled by ignorance. As leaders, we must encourage our people to learn about the refugee process and reflect on what scripture calls us to live out. We will then be able to have conversations that can lead to changed thinking.

For example, if someone says, “Well, we're just letting these refugees in who can harm us,” then our response can be, “Let me ask you a question. If you wanted to sneak into a country to harm people, would you go through an 18-month to two-year process, have your fingerprints and biometrics taken, have your background looked into, and then show up? Or would you find a much easier means to sneak into a country?” The reality is that there are easier ways to get into our country. It is only by being informed of how processes work that we can be good advocates.

3. We must remember that God’s word can combat fear. Fear is motivating many people to say, do, and advocate for things today that they otherwise wouldn’t have. Of course, this does not always mean that a presidential election vote means a specific fear. I know people who voted for Donald Trump for different reasons than his view on refugees, and think very differently than he does on this issue. That said, we cannot ignore the obvious trend in rhetoric and understanding. It may not be all, but we can see there are many who have been captured by a fear of terrorism and ‘the other’ they don’t know and read about on the news.

So what do we do? We speak words of life into their hearts. We speak words of peace, hope, and promise. We encourage them to move past the emotions and into acting as people who believe that God holds all things in the palm of His hand. As long as fear reigns anywhere in the world, we have the opportunity to offer a rebuttal—the peace of God that passes all understanding.

Stand in Solidarity with Refugees

I welcome refugees as a demonstration of my solidarity with the fleeing and desperate. Refugees are some of the most vulnerable and brave people in the world who have been forced to flee from their homes due to circumstances outside their control, having often experienced unspeakable, inhumane horrors. At a time of historic, unprecedented forced migration, we absolutely must do more, and we can do more: history demands us and the children beg us. Welcoming refugees is not only the right thing to do but it clearly strengthens us as a country of the most brave, the most grateful, the most determined to live and love and create thriving, flourishing communities. I urge all our elected officials to work with welcoming communities to assist refugees wherever they are in tangible and practical and directly needed ways.

Join the conversation on Facebook
Tags:
None
Posted:
December 7, 2016

The Narrative of Fear Surrounding Refugees: Preparing Ourselves for the Conversation

The Narrative of Fear Surrounding Refugees: ...