Expository preaching is the best, but not a biblically mandated, preaching approach
Ed Stetzer 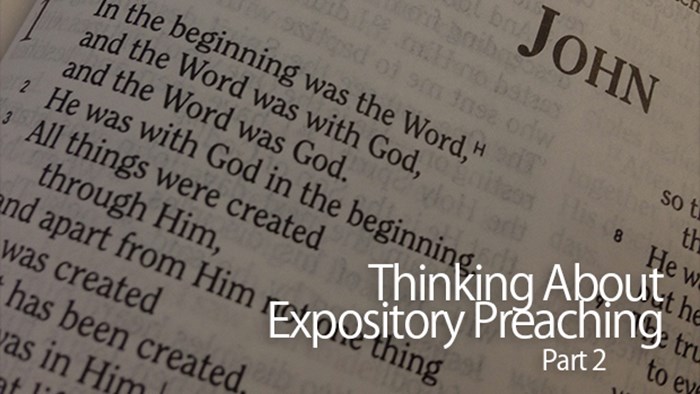 Previously, I explained why verse-by-verse expositional preaching is, in my view, best as the norm and the standard practice in your church. In this article, I want to give the other side—why it is not biblically mandated, though I think it is the best practice.

First, I don’t see verse-by-verse expositional preaching as biblically required because I don’t find the way we generally do it today to be found in Scripture.

The Ezra passage is the closest and the best example, and the point is clear: they read the words of the text then explained it. More than one form of preaching can do that.

My friend Hershael York, who gave me some helpful feedback on this article, defines expository preaching as:

Any preaching that a) teaches the authorial intent of the passage and b) makes appropriate application. I think if you go beyond that in the definition of expository preaching, you define away a lot of faithful and biblical preaching.

I agree with him. He continues, "While it’s true that a verse-by-verse methodology is not mandated in Scripture, it is mandated that we teach the sense of Scripture." Here is the key: preaching needs to teach and explain the Bible, and that can be (and, I think, mostly should be) verse-by-verse exposition, but is not only verse-by-verse.

Second, we don’t find evidence for this type of preaching in the New Testament or immediately after biblical times among the early church fathers.

We can find support for this in an unlikely place, the Master’s Seminary Journal from Masters Seminary (where John MacArthur serves as the Chancellor). They are vocal advocates of verse-by-verse preaching, and, my last article could have been written by a Masters seminary professor.

However, in a journal article detailing the history of expositional preaching, they bemoan the fact that expository preaching does not become the norm until long after the New Testament. Allegorical, topical and other methods dominate preaching—generally speaking—until John Chrysostom began using a method we would recognize as expository.

Chrysostom's preaching was marked by a new skill set, including for example, the diagramming and breaking down of sentences. Such a grammatical approach was new in his time and is not present in in the majority of the world today. This type of preaching requires a literary sense and a knowledge of verbs, nouns and sentence structures.

Jesus didn’t go through verse-by-verse exposition on the road to Emmaus.

I admire Chrysostom’s preaching; that isn't the issue. His model should be held up as a standard. It is the model we use in my church. But I find it difficult to say something is a biblically mandated form when it is not found explicitly in the New Testament or even in the early church.

Making such claims is unhelpful and ultimately can undermine the development of preaching in the majority of the world. To be totally rigid and unyielding on an issue not clearly commanded in scripture can become a legalism bordering on idolatry.

Instead, I think we have to find ways to make expository preaching more accessible to people without the education of a John Chrysostom or a John MacArthur. Thus I would say that a tribesman among the Pokot in Kenya can be encouraged to open the Bible, read the text, and explain what it says in a way that Western Christians might not find to be traditional verse-by-verse exposition. And when such a tribesman rightly divides the Word of truth, we should recognize it as a good, God-honoring, biblical example of teaching the Scriptures.

Furthermore, I think it’s essential we recognize the examples of preaching we have in the Bible—particularly in the book of Acts—are evangelistic preaching. In other words, it is topical preaching. Thus, there has to be a place and a space for this in the lives of our churches.

Topical preaching can be occasional as it is in my church. Quoting Hershael York again (in a forthcoming interview in Preaching Today):

A topical series that is still textual and expository can give a congregation the 40,000 foot view of the Bible, reminding them that it’s really one story of redemption, not 66 unrelated books that say something nice about God. We can only understand the parts of the Bible in light of the whole, so we need to change lenses often enough to help us hone in on meaning because the part informs the whole even as the whole reveals the meaning of the parts.

And, let me add, I think a church that primarily teaches the Bible topically can also be faithfully teaching the word. It's not my approach, for the reasons I've listed, but I'm thankful for churches that are faithfully explaining the meaning of the text through topically-driven sermons as well.

In a recent dialogue I had with three preachers—two of whom are predominantly expository, one of whom is predominantly topical—there was a clear agreement on an acceptable place for biblically-responsible topical preaching.

Be sure to pick up Herschel's book, Preaching with Bold Assurance. And, be sure to read the first part before commenting on part two.