A look at the place of thematic, narrative, and topical preaching
Ed Stetzer 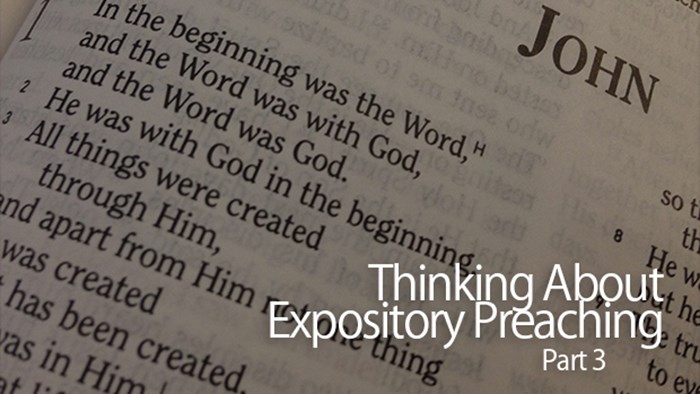 First, I would suggest we need to engage in thematic or doctrinal preaching that doesn’t just take its flow from one verse, but instead brings to bear the totality of the Scriptures on a given subject. Thus it’s quite appropriate to preach a series on prayer that would draw from Psalms, Acts and the Gospels to explain the value and practice of prayer. A series on the Incarnation might include Old Testament prophecy, fulfillment from the gospels, and further explanation in the epistles.

Remember exposition is explanation. So the key when we engage in this sort of thematic or doctrinal preaching is to engage enough of the Bible that as we explain it, we explain not just one small idea. Despite the “road to Emmaus” sermon often being categorized as expository, it almost certainly was thematic. Luke says,

“Then beginning with Moses and all the Prophets, He interpreted for them the things concerning Himself in all the Scriptures.” (24:27, HCSB)

Jesus didn’t explain the entirety of the law and prophets, but the things concerning Himself. That sounds like thematic preaching.

Preaching thematically, if done right, means the preacher must actually spend time digging through the Bible so that the explanation presents all the Bible says about prayer. If not, we could merely be presenting our own ideas about prayer with a few verses assembled to make the point. Preaching onto the text is not the same as preaching from it.

I also think it’s quite appropriate to do narrative preaching—weaving a story through multiple passages that explain a character or a situation more in depth. For example, we recently preached a four-week series on Rahab. I joked that nothing says good preaching like a story of an idolatress Canaanite prostitute. But Rahab shows up throughout the Bible in many different places.

So rather than only work through one of the passages, we moved through themes about Rahab’s life that were appropriate to our understanding of who she was. That is a form of narrative or storytelling preaching that communicates a broader story contained in multiple places in Scripture.

There is a place for the pure topical sermon. And I’m thankful for the many topical preachers who open up the Bible and use Scripture to explain the theme of their sermon.

Rick Warren explains his approach as not verse-by-verse but verse-with-verse. When I preached at Saddleback, I sent my outline in advance.

He encouraged me to add more Scripture to it.

Topical preaching may be more suited to those types of guest speaking opportunities. I actually wrote an article for The Gospel Coalition on how to preach a “one time” sermon. One of the options I gave was preaching a topic with texts. So I’m not stridently opposed to topical teaching and use it personally on occasion, but when it is done, the Bible must set the agenda of both the topic and the conclusion. Otherwise, it’s too tempting for us to be driven by our own perceptions, arriving at conclusions more preferential than biblical.

As you can probably tell, I am most enthusiastic about verse-by-verse exposition and least enthusiastic about topical. However, the convictions I’ve come to are largely for my church specifically, and my own preaching ministry. I understand some people are on a warpath against topical preaching. I’m not one of those, and believe such warpaths tend to bloodshed. That is unhelpful.

I would simply encourage all preachers to take seriously the Word of God in whatever preaching method you use. God has placed you in your position to deliver and explain His Word, not to espouse folksy wisdom, or preconceptions with loose support from biblical passages.

For me, the easiest way to ensure this is predominantly through text-driven sermons using verse-by-verse exposition through books of the Bible. Our desire should always to be to let the Bible set the agenda and shape us rather than the other way around.