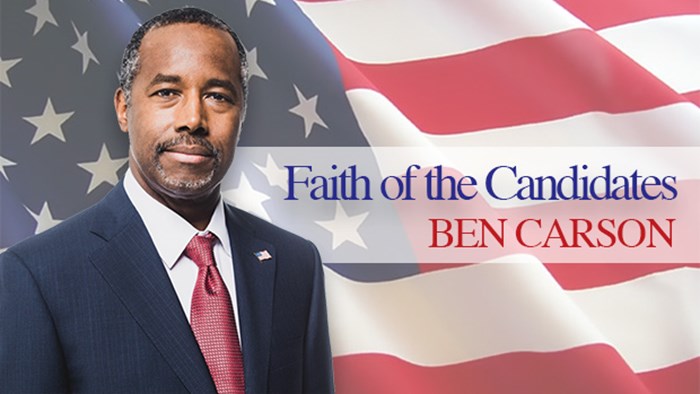 This is part 2 of my interview with Republican presidential candidate, Dr. Ben Carson. You can find part 1 here. If you have questions about why or how we do these interviews, or why your preferred candidate is not interviewed, click here.

Ed Stetzer: Are there people you look to for spiritual advice and counsel that might shape your spiritual journey?

Dr. Carson: We have a spiritual counsel­—a number of ministers around the country that we talk to on a regular basis.

My strong feeling is that if this country is going to be saved, people of faith are going to have to step up. They’re going to have to be a part of it. They can’t continue to be silent, and allow the secular progressives to always set the agenda.

ES: What would it look like if people of faith were to step into the public square? Does that mean we turn back some things, move forward on some things?

Dr. Carson: I think it would mean not being afraid in the pulpit to talk about what’s going on in our society. Not thinking, "My 503(c) status is going to be cancelled, so I’d better keep my mouth shut."

Freedom is not free. You have to be brave.

ES: At LifeWay Research, our research shows most Americans don’t want the IRS saying what can be said in pulpits including, if pastors want to endorse. But, most people are saying they don’t want endorsements from the pulpit. What would you suggest pastors should do in their pulpits—that they’re afraid of doing now—because of tax exemption rules?

Dr. Carson: Well, you look at what was going on in Houston a few months ago as a prime example. There’s no way that they should allow a city official or state or national official to say what you can and cannot talk about. Or, that you are going to be penalized if in any way they detect some sentiment that doesn’t confirm or affirm homosexual behavior. I mean, that’s craziness.

I’ve been accused of being a homophobe. I’m not. But, the Bible talks very specifically about homosexuality in both the New and the Old Testament, and not in a complimentary way.

So, ministers have to make a decision. They have to decide do they go with what is politically correct or go with the Word of God? Because if, in fact, you are willing to put aside the Word of God for political correctness on one issue, then you will put it aside for any issue.

That’s the camel’s nose under the tent ready to negate the word of God.

ES: It seems—as you mentioned with LGBT issues and same-sex marriage—that culture is moving in a different direction than most people of practicing faith. If that view is indeed a minority view, how would a President Carson address LGBT issues?

Dr. Carson: Well I’m not sure it is a minority. I think a lot of people are afraid to speak up; no question about that.

Remember it was Joseph Stalin, when talking about the One World Order, said that the United States was the stick in the mud and he would have to erode our basic pillars or foundations of strength. And he said there were three things: our spiritual life, our patriotism and our morality. And you can see those things.

Those are the very things that are under attack. We have to have leadership that understands, just as well as those who want to bring us down, what our pillars of strength are, and to emphasize those in a right way.

On Helping the Poor

ES: Reading the Bible, we find a lot of verses about the poor, the imprisoned, the widowed, and the orphaned. How would your faith impact how you would govern related to those issues of hurting and marginalized people?

Dr. Carson: There is a ton of stuff about how we have an obligation to the poor, from Jesus in particular—and I believe that.

Many of the secular progressives just pat the poor on the head and say “there, there, you poor little thing. I’m gonna take care of all your basic needs.” They create generational poverty in the process. I don’t think that’s compassionate at all.

What we really need to be doing is understanding how we use resources that provide a ladder of opportunity that allow people to climb out of the state of dependency. That’s what’s true compassion.

ES: So the governmental role in that would be?

Dr. Carson: Well, a good example of governmental role would be the over $2.1 trillion of American money overseas because of our highest corporate tax rates in the developed world. I would establish a six-month hiatus tax-free to allow that money to be repatriated—the only requirement being that 10 percent of it has to be used in enterprise zones and to create jobs for people who are unemployed and on welfare.

That would be the biggest stimulus since FDR’s new deal, and it wouldn’t cost the tax-payers one penny.

It’s low hanging fruit, but it also gets corporate America once again thinking about investing in the people around them.

It works best when the private sector does the investing. When the government does it, it just creates big bureaucracy.

ES: One of the things that Seventh Day Adventists are known for—and you, for sure, as a physician—is healthy living: abstaining from alcohol, tobacco, drugs, and some meats.

Do you see a President Carson doing any health initiatives that would sort of maybe be aligned that faith tradition?

Dr. Carson: Not in the Bloomberg sense. [see link]

I certainly don’t believe the government has the responsibility to be forcing people to eat this or not or have only this much to drink. That’s not freedom in America. But there’s absolutely no reason that you can’t emphasize healthy living, particularly the physical aspects.

When we talk about our all-voluntary military, only 29 percent of young people between the ages 17 and 24 who apply are acceptable. The reason is physical, mental and educational deficits.

This is a serious national security issue that must be dealt with.

On Keeping the Sabbath, Salvation, and Eternity

ES: One more question related to Seventh Day Adventists theology. Some would call Sunday keeping the Mark of the Beast. I’ve seen you, in your history, go back and forth, between different churches.

ES: So what do you think about Sunday keepers?

Dr. Carson: I would say most of my best friends are Sunday keepers. I don’t see any mark on them! They’re good people.

I look at it this way, our job is to get to know God, to get to know His nature and His Sprit and His love. Now understanding that, you come to understand that He is not gonna be sitting there with a little pad and saying, “Let’s see. You did this. Okay. You’re out. Even though you love Me and you’ve been good to other people, you didn’t check that box. You’re out.”

ES: What is the basis, as see God, of His forgiveness and His grace?

Dr. Carson: The basis of it is His love for us, and the fact that He sent His Son to die for our sins and His Son paid the price.

As it says in John 3:16, “Whosoever believeth in him should not perish but have everlasting life.” That is the criteria.

God sent not his son into the world to condemn the world, but that the world through him might be saved.

That’s what we need to understand.

ES: What about people who don’t receive and follow Jesus Christ and the gospel message? What’s your perception of people of other faiths or of no faith? What’s their spiritual condition and need?

Dr. Carson: Well I believe that God is fair. He knows your heart.

So that person who was born in Borneo who never encountered a missionary and never heard the word Jesus, that person still has a heart, has a mind and God is able to judge the heart.

You know, the interesting thing is, even though that person in Borneo never heard about God or the Bible, the thief in Borneo waits until night time when nobody can see him and he goes and steals.

So he knows it’s wrong.

ES: So will that person in Borneo—with the right heart who’s never heard the gospel—be in eternity with Christ in heaven?

Dr. Carson: Well, only God knows the answer to that. But my impression of God is yes.

ES: What about the person who has heard but has rejected because they’re a secular person, Muslim, Hindu, or whatever else it may be? What about their eternal destiny?

Dr. Carson: Well if they reject the love of God, why would He torture them forever by having them eternally in His presence? That wouldn’t be very nice.

My impression, from reading the Bible, is that those who will not accept what He has offered will be obliterated.

I don’t happen to believe like some do that they’re gonna be in this little torture chamber with little people poking them with knives and things forever and putting hot coals on.

I don’t see God as doing that to people. But I do, the Bible does say that they will be obliterated.

That they will be obliterated by fire and that obliteration will last forever. It will never arise again.