Mainline Protestantism as a whole is hemorrhaging.
Ed Stetzer 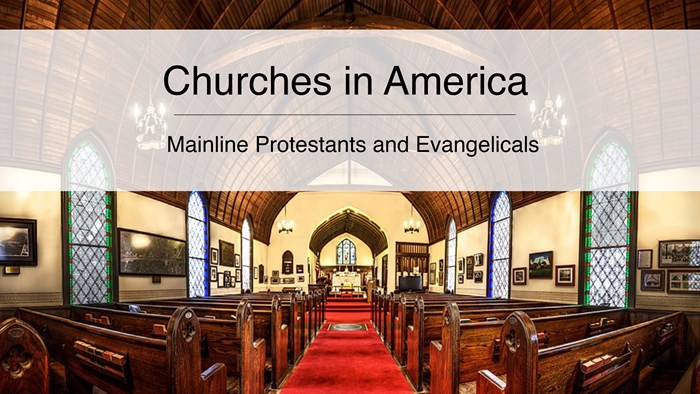 This is the second in my series The State of the American Church. Part 1 dealt with what has recently been generally revealed in religion statistics in America. Today we’ll look at some specifics related to Mainline Protestants and Evangelicals.

Mainline Protestants (those in the United Methodist Church, Evangelical Lutheran Church in America [ELCA], Episcopal Church, Presbyterian Church [U.S.A.], American Baptist Churches, United Church of Christ [UCC], and The Christian Church [Disciples of Christ]) have fared poorly in recent decades. While Christianity overall is not dying in America, Mainline Protestantism is getting closer. According to the GSS, 28% of Americans identified with a mainline church in 1972. By 2014, that number had dropped to 12.2%.

A recent report from the Presbyterian Church (U.S.A.) corroborates this trend. The report looked at church statistics from 2002 to 2013. The denomination reported net membership losses each year. In 2002, the denomination shrank by 41,812 members. This number peaked in 2012 when they reported a net loss of 102,791.

Mainline Protestantism as a whole is hemorrhaging and is facing an existential crisis.

Other Mainline denominations faced similar declines due to several factors, including aging membership, falling birthrates, a lack of theological clarity, and a shortage of new churches. Mainline Protestantism as a whole is hemorrhaging and is facing an existential crisis. If the current trajectory continues, some Mainline denominations could cease to exist in the next four to five decades.

Evangelicals have remained steady for the most part, according to the polls. The GSS found that evangelical affiliation and reported church attendance peaked in the 1980s and 1990s, then declined, then rebounded. In 1972, 17.1% of Americans self-identified as evangelical. In 2014, this percentage increased to 22.7. Similarly, the number of Americans regularly attending church increased from 7.9% to 12.5%.

Evangelicals are experiencing both a success story and a “glory days of old” story. The success is that more Americans identify as evangelicals, and that more people attend evangelical churches. But evangelicals remain uncertain about the future. There’s essentially a “The Sky Is Falling” fear that forecasts doom for the future. Christian Smith of Notre Dame refers to this trend as “Evangelicals Behaving Badly with Statistics.”

Today, about 62 million U.S. adults identify with evangelical Protestant denominations, up from 60 million in 2007. Evangelicals, unlike Catholics or Mainline Protestants, have also benefited when people switch their religious identity. There are 1.2 adults who have converted to evangelicalism after having been raised in another faith (or no faith) for each person who has left evangelicalism for another religion (or no religion).

Still, there are challenges. Christian Smith of Notre Dame suspects evangelicals, especially white evangelicals, may decline in the future:

(Evangelicalism) grew long term in part because it had higher fertility by adopting birth control more slowly than mainliners and partly because it was attractive to many more Americans as a faith. It seems that many internal divisions that have always been in evangelicalism are growing stronger and more clear, less able to keep in the background. Also, internally, in its culture, evangelicalism seems to have become so acculturated that it has some growing identity crises, I think.

Internal division, an identity crisis, and lower birthrates may lead to a decline among evangelicals in the future. Also, just as mainline Protestants found their way into evangelical fellowships, many of them—and their children—may find their way back to other traditions, if even for a short time. Still, the evangelical movement has shown surprising resilience, say researchers Byron Johnson and Gordon Melton of the Institute for Studies of Religion at Baylor:

Southern Baptists have declined, but overall Evangelicalism is showing the largest growth in American religion. This important and fascinating story has been almost completely overshadowed by the preoccupation of the supposed rise of the Nones.

Johnson and Melton argue that many of the Nones are attending non-denominational churches, another overlooked segment of the church.