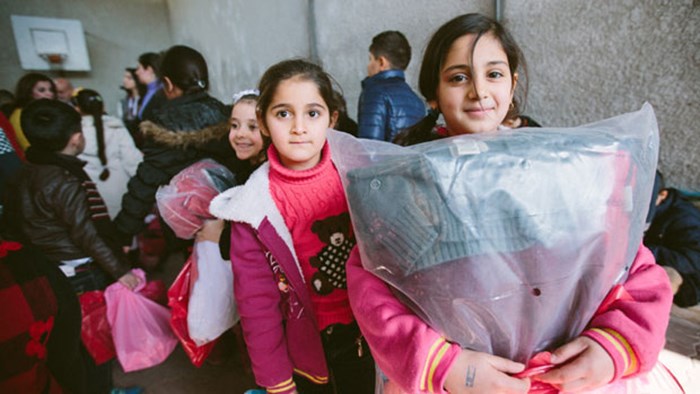 Today’s blog comes from Stephan Bauman, who serves as the President of World Relief, which includes approximately 2,500 staff in 20 different countries focused on a mission of empowering local churches to serve the vulnerable, including more than 25 offices in the U.S. that resettle refugees. Stephan is the co-author of a forthcoming book on the refugee crisis, Seeking Refuge: On the Shores of the Global Refuge Crisis (Moody Publishers, 2016).

Washington Post columnist Michael Gerson recently captured the words of Syrian children stranded in Lebanon: "My home is all broken in Syria," said a little girl. "A rocket came and hit my father in the head," said another. One boy drew a picture of a bomb.

Someone once said, "It's not the millions that move us, but the one." The crisis in Syria has certainly proven this to be true.

My colleagues in Jordan, Iraq, and other parts of the Middle East are exhausted from responding to the escalating crisis, which since beginning in 2011 has displaced more than half of Syria’s population, including more than 4 million who now reside as refugees in neighboring countries. While overwhelmed, though, they also express an unequivocal gratitude: over the past six months, the world has finally chosen to embrace the plight of refugee families in what is being called the worst humanitarian crisis since World War II. And we know millions more have been forcibly displaced, not just Syrians—about 60 million globally. We are living in an age of unprecedented migration of people, a global exodus.

As I talk with people across the country, I encounter two prevailing emotions. The first is compassion. The image of Alan Kurdi, the child who washed up on a beach in Turkey last September, suddenly tipped the world's collective conscious towards empathy. Alan gave us a glimpse into the pain of those forced to flee their homes. We identify with Alan's mother or sister or brother or aunt or cousin. For me, I feel the anguish of his father.

Our compassion spills over to families fleeing ISIS in northern Iraq or to the millions fleeing war in places like South Sudan, Congo, or Yemen, to name only a few. People are rising to the biblical call to "welcome the stranger," an indispensable ethic for anyone choosing to follow Jesus of Nazareth, who once set out on the refugee trail himself. Churches are coming together, too, to reach out to refugee families in Fort Worth, Seattle, Boise, Durham, Chicago, Orange County, High Point, Atlanta and so many other cities. And communities take notice when people live out their faith in the public square.

But the second emotion is fear. Fear rises in us when we talk about welcoming Syrians or Iraqis here in the United States. Many are concerned about creating a gateway for terrorism. Their fear is understandable, particularly in light of terrorist attacks in Paris and California last fall. But a bit of history and data can go along a way to assuage our concerns. The United States has resettled over 3 million refugees since the late 1970's. None have been terrorists. World Relief, the organization I serve, has resettled nearly 275,000 refugees since 1978. None have been terrorists.

There is good reason for this: the vetting process of refugees who qualify for resettlement is extensive. The FBI, State Department, national intelligence agencies, and Department of Homeland Security are all involved in a process that takes 18 months and often much longer, with significant clearance hurdles. Refugees are not the threat that some try to make them out to be: in fact, they are subjected to more thorough screening than any other category of immigrant or visitor who comes to the U.S.

It turns out that refugees are a good investment too. Many people believe refugees are a burden to the countries that receive them. But the opposite is true. Studies show that welcoming refugees often has a positive effect on a host country's economy and wages. Germany is being talked about as the new "land of the free" because they are accepting upwards of 800,000 Syrians. While we applaud Germany's moral courage, they are also smart. Their decision is as much economic as moral.

Our global exodus is also personal. We all have our own stories as refugees or other immigrants, whether first generation or several removed. I recently found my wife, Belinda, staring at a photo of her grandfather, Alexis Koshanov, or "Grandpa Alex," as Belinda knew him. Alexis fled Lithuania just before Hitler's whisper campaign, but was turned away at Ellis Island because he was Jewish. He later immigrated into the United States via Canada, but his sister died in Auschwitz and his brother barely survived Dachau. Today's new exodus reminds Belinda of another exodus not long ago: "I am a refugee, just two generations removed," she said, tears filling her eyes.

Almost every day I hear about a church, neighborhood, or community opening their arms to a refugee family. These people are heroes. Why? Because they have chosen to open their hearts, their minds, and even their homes to refugees. As they do, the language of "refugee" quickly fades away to become "friend" and eventually, we hope, "brother" or “sister.” As our world faces the worst refugee crisis in recorded history, I believe that our country ought to do more, not less, and I am confident that local churches throughout the country will step up to welcome these carefully-screened individuals who have fled persecution and reached our shores.

A recent LifeWay Research survey, however, suggests a significant disconnect between our theology and our praxis within the American church. Eighty-six percent of Protestant pastors affirm that we have a responsibility to care sacrificially for refugees and other foreigners—how could we read our Bibles and come to any other conclusion? But only 8% of pastors say their churches are actively involved in serving refugees locally, and less than one in five are involved in meeting the needs of refugees overseas. My World Relief colleagues both throughout the U.S. and across the globe are eager to help bridge that gap, living out our mission by empowering local churches to serve the vulnerable.

We are at our best not when we turn our backs or demand our rights or talk about walls but when we welcome the refugee, the sojourner, the immigrant, with Alan's image engraved on our hearts and Alex's history etched into our memories. We are at our best—as a people, a Church, a community and a nation—not when we fear but when we love.