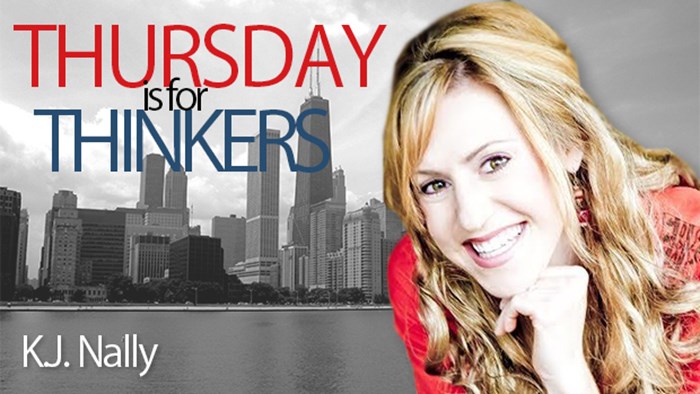 K.J. Nally writes and teaches the truth about God, relationships, and life. K.J. and her husband, Dustin, have a passion to fight for Godly marriages, spur on teens to seek true fullness of life, and encourage men and women to flourish as they live for their Creator and Savior. She earned her master’s degree in Biblical Counseling from Southeastern Seminary.

K.J. is the author of The Storms of Life: Trusting God through Emotional Pains, Hurting Marriages, and Addictions; Absorbed: Becoming Physically, Emotionally, and Spiritually Intimate as God Designed; and The Thread: Adoption Stories Knit Together by Love.

I’m glad to have K.J. writing today, and welcome her to the Thursday is for Thinkers series.

If you search the Internet for any length of time, you will find site after site, and story after story affirming a new definition of marriage and encouragement to divorce “for happiness sake.” Fact is, the biblical family is facing endangerment and tragically most Christians have studied little what Scripture says on this topic.

I state that with a confident assessment from my own personal counseling experiences. In almost every conversation I’ve had on this topic with a struggling married person, a friend, or a family member the response was, “but doesn’t God allow divorce if someone’s unhappy?” Or as the court system defines ‘irreconcilable differences.’

When we studied what the Bible actually stated on this topic, they were shocked realizing they had believed a pop-Christianity—a mixture of culture and nuggets of Bible heard in church—instead of what God has defined in Scripture. In every case, this newfound truth gave them biblical insight, and for the burdened, a passion to fight for their marriages and hope for restoration!

Jay Adams appropriately conveys the concept of divorce as biblical; therefore, he instructs Christians to do all they can to understand it and to teach what God, and His Word, say about it.[i]

Journalist LZ Granderson stated the view of some in popular American culture today:

‘Til death do us part. On my wedding day, I will not be saying that sentence. Not that I'm not in it to win it—I am—only that if two people are told they can never leave, how do they know the other really wants to stay? Marriage is hard enough without the specter of death being the only way out hanging over our heads. To me, it's just another fire and brimstone tactic absentmindedly handed down from generation to generation just to get people to stay in line.

No more ‘til death do us part? Call it ‘til inconvenience, frustration, fatigue, or finances do us part.

Some people may feel relieved after divorcing a burdensome spouse, but neither party leaves the marriage unscathed. Even atheists who have gone through divorce will admit to the brokenness—and at times horror—that accompany a “happy” or “necessary” divorce.

A New York Times journalist shares after her affair-induced divorce, “I look at my parents and at how much simpler their lives are at the ages of 75, mostly because they haven’t marred the landscape with grand-scale deceit. They have this marriage of 50-some years behind them, and it is a monument to success. A few weeks or months of illicit passion could not hold a candle to it.”[ii]

Marriage doomsayer and covenantal vow-keeper alike can see that divorce is abundant in our world today; therefore, the need to rediscover the biblical view is critical. If Christians, who live their lives according to Scripture, do not heed this call to action—by not only teaching truth, but also personally living it out—Granderson is right; the Church will be left behind. The issue of marriage already is and will be the major debate for evangelical Christianity in the coming decades.

Restoring God’s design for marriage as a model of Christ and His church is a key step in strengthening marriage. When husband and wife live with the acute awareness of living out the divine relationship, divorce becomes a less likely option. As Murray reminds us:

“The marital institution is sanctified by the forces of redemptive grace to such an extent that it is made one of the main channels for the accomplishment of God's saving purposes in the world. It is in the bosom of the Christian family that the nurture which the Lord himself provides is administered.”[iii]

At creation God had great plans to use marriage as a beacon for his covenant love; His plans have not changed—let us spur one another on to pursue marriages that blossom with the beauty of the Gospel.

[i] Jay E. Adams, Marriage, Divorce, and Remarriage in the Bible: A Fresh Look at What Scripture Teaches. (Grand Rapids: Zondervan, 1980), 23.

Join the conversation on Facebook
Tags:
Divorce | Marriage
Posted:
May 26, 2016