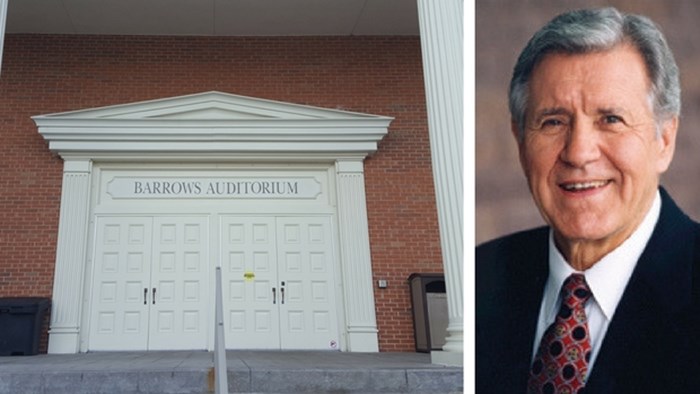 Image: auntiesem
Since 1950, Cliff Barrows served as Vice Chairman to the Billy Graham Evangelistic Association Board of Directors. He was the Music and Program Director for Billy Graham Crusades since 1946 and led congregational singing and Crusade choirs around the world. Through music and the proclamation of the Word, Mr. Barrows and Mr. Graham shared the hope of the Gospel that brought millions to saving faith in Jesus Christ.

Every day when I come into my office at the Billy Graham Center, I walk through the main doors marked “Barrows Auditorium.” Once inside, I pass by the auditorium, which, to this day, is often filled with students and outside groups singing gospel, contemporary, and other songs which fill our spirits and lift our eyes to Jesus.

In fact, Cliff Barrows once said, “The Christian faith is a singing faith, and a good way to express it and share it with others is in community singing.”

Today, this great man of faith, who perhaps led more people in a choir than anyone, has gone to be with the Lord he loved and gave his life worshipping.

From 1945-1948 he worked as a Youth for Christ evangelist and song leader and in 1945 he joined Rev. Billy Graham at a rally in Asheville, NC. He and his new wife, Wilma “Billie” Newell, were attending a Youth for Christ rally in Asheville and the rally and the scheduled song leader and piano player was not able to attend. Rev. Barrows filled in, beginning a lifelong association with Rev. Graham. He served as music director, song leader, and master of ceremonies at almost all of Graham’s evangelistic meetings.

When you hear the name Cliff Barrows, many of us think integrity. That’s what the Bible calls having a “good name.” In fact, Proverbs 22:1 says, “A good name is more desirable than great riches; to be esteemed is better than silver or gold.”

Moments ago, as I prayed with a group of church leaders for his family, I also prayed for ourselves. I prayed that we, like Rev. Barrows, might live lives of such integrity and impact.

Rev. Barrows once said, “I’ve had no greater joy than encouraging people to sing. Every great moving of the Spirit of God has been accompanied by great singing. I believe it will always be so!”

As we remember his magnificent legacy and his contributions to not only worship through song, but lives moved from lost to found, let’s follow his legacy. If he has taught us anything, he has taught us to keep singing of our Jesus until our final breath and until revival breaks out across our communities, nations, and world.

Thank you, Rev. Barrows, that you lived a life of integrity and taught us what true worship looks like.

A funeral service will be held on Tuesday, November 22, at 10:30 am at Calvary Church in Charlotte, NC.

The Billy Graham Evangelistic Association has created a memorial page for Rev. Barrows.

The Billy Graham Center Archives has created a memorial page for Rev. Barrows.

Join the conversation on Facebook
Tags:
None
Posted:
November 15, 2016