When your ethics change based on wanting something to be one way or another (or one person to win or not), that's the definition of selling your soul.
Ed Stetzer 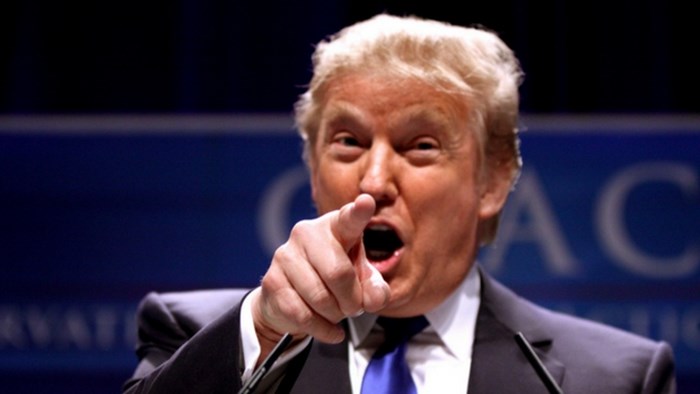 Character matters for elected officials. At least that's what Evangelicals used to think.

The graph tells the story: 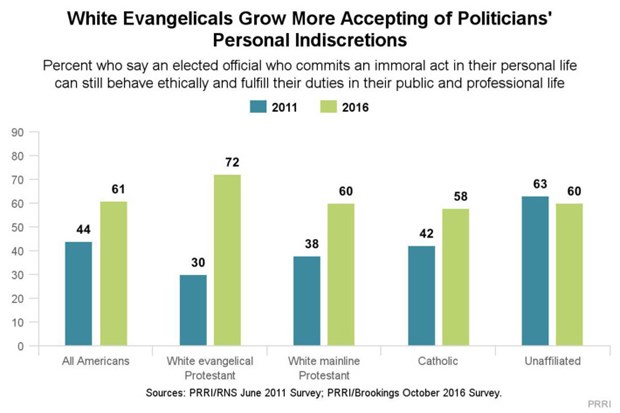 Five years ago, white Evangelical Protestants were the most heavily Republican voting bloc in the country, and also the group most concerned about the private morality of public officials. Only 30 percent of them believed that “an elected official can behave ethically even if they have committed transgressions in their personal life.” A recent article in New York Magazine headlined with “Religious Right Now Judgement-Free, Thanks to Donald Trump.” In it, the author states:

But Donald Trump has changed all that. Today, white evangelical Protestants are the least moralistic cohort of voters.

He goes on to cite a PRRI/Brookings survey, which affirmed that 72% of white evangelical Protestants “now believe elected officials can behave ethically even if they have committed transgressions in their personal lives.”

It doesn’t take much reflection to see the writing on the wall if we are to believe this survey: some people are now OK with wrong as long as they get the guy on the right.

Now, I'm not of the view that this means you've sold your soul if you vote for Trump (or Clinton, for that matter). In fact, in the past month I have hosted quite a few Evangelical leaders who have spoken quite eloquently as to why they are voting for Trump, Clinton, or others. I am friends with a number of people with whom I personally disagree in regards to this election season.

However, the NY Magazine article highlights something very important—the people of God, who are called to hold to the highest standard of morals and ethics, now rank as the highest group percentage-wise of those who say that these things don’t necessarily matter. This is a problem of huge proportions.

With such a swing happening in a short period of time, we have to consider the surrounding circumstances. As such, it is hard not to conclude that for many this has happened so that they could justify voting for Trump.

Now, it would be one thing if those individuals said, “Integrity still matters, but, man, we are stuck with two people who have integrity problems, and I am going with ________ in spite of my integrity concerns.”

That would be making a hard choice while keeping your beliefs.

But that’s not what happened.

Instead, to support a candidate, many actually changed their view. Remember the question: “an elected official can behave ethically even if they have committed transgressions in their personal life.” When that was Bill Clinton, Evangelicals were “nope” but now that it’s Trump, they’re “yep.”

That’s the definition of selling out.

Proverbs 28:6 tells us, “Better is a poor man who walks in his integrity than a rich man who is crooked in his ways.” Romans 12:2 urges us, “Do not be conformed to this world, but be transformed by the renewal of your mind, that by testing you may discern what is the will of God, what is good and acceptable and perfect.”

You can vote for Trump or Clinton and not sell your soul. However, when your view changes based on wanting something to be one way or another (or one person to win or not), that's the definition of selling your soul. A dictionary definition states it like this: “to do or be willing to do anything, no matter how wrong it is, in order to achieve one's objective.”

Ironically (but importantly), this is not about Donald Trump’s character or transgressions—now or prior—but about the character and transgressions of Evangelicals who change their views to suit the moment.

Sure, you can vote for Trump, Clinton, or someone else this election season. But my hope is that every Christian who has decided to vote for Trump has, at some point, spoken out against his comments regarding sexual assault, immigrants, women, and additional issues that defile all people who are made in the image of God. This is what people of character do—they speak truth to their candidates. They don’t suddenly decide, “Well, I guess character does not matter since it is my candidate with the character issues.”

Similarly, I hope that if you've decided to vote for Clinton, you've spoken out concerning the ongoing ethics problems that go back decades and now continue to surface every day, and her stance on abortion and many more issues that defile all people who are made in the image of God. (I’ve expanded my recent comments in CNN about why so many Evangelicals oppose Clinton.)

Let me repeat myself: this is what people of character do—they speak truth to their candidates.

Whoever you decide to vote for in this election, be sure you have made the decision with a heart set towards pleasing God, not man. And if you find that you have overlooked or dismissed many of the morals and values that you have held dear in the past, then it just may be that your character has been Trumped.

Evangelicals: This Is What It Looks Like When You ...