Evangelical Views of the 2016 Election: Not the Lesser of Two Evils, Choose Candidate Evan McMullin Instead

Editor-in-Chief of Christ and Pop Culture wants to lay a foundation for a future conservative party
O. Alan Noble 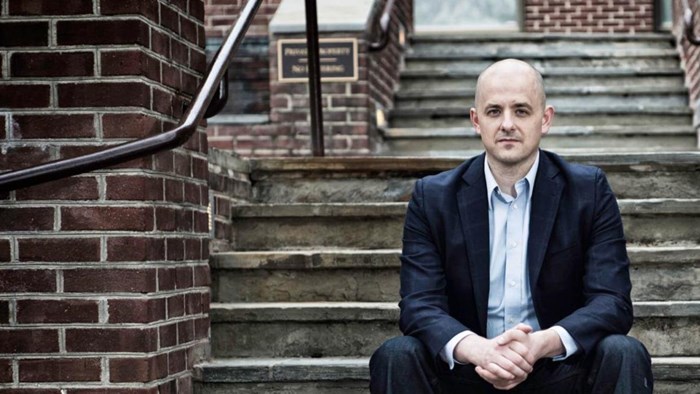 Thursday we had Ronnie Floyd, who prioritizes issues over candidates.

Yesterday we had Darrell L. Bock, who insists there are no “must” candidates.

Today we welcome to the conversation O. Alan Noble, Co-Founder and Editor-in-Chief of Christ and Pop Culture and Assistant Professor of English at Oklahoma Baptist University.

I support Evan McMullin’s campaign for President. For the first time in my life, I even donated to a political campaign, and I did so knowing that McMullin would almost certainly not win, or even come close to it.

The truth is I support McMullin for President because I believe that doing so is the best chance we have for cultivating an influential, vibrant conservative party that promotes human flourishing and defends life into the future.

I’ve come to this position begrudgingly, but driven by a few principles.

One is that it is possible for a candidate to be so unacceptable that they do not deserve our vote regardless of how bad the other major candidate is. The minimum standard is opposed to the more popular, pragmatic idea that the acceptability of a candidate is relative to who they’re running against.

It is not that I believe in only voting for perfect candidates, or even only for good ones. My objection is to the idea that I must vote for one of two candidates when I believe either will be profoundly harmful to my neighbor. When an election has come to this point, the answer is not to “hold my nose and vote,” as I have been admonished to do. It requires a drastic action that calls attention to the political and societal rot that brought us here and advocates for a new way forward. And I believe the best action in this situation is to vote and advocate for Evan McMullin.

I have a number of concerns about McMullin’s campaign, how thin his platforms are on his website, the absence of a plank on racial justice and religious liberty, his lack of a running mate, and his near-impossibility of winning.

But ideologically, there is much for me to praise. Among the candidates, he uniquely understands the threat of Islamist terrorism and yet is an advocate for refugees. He’s pro-life and supports traditional values, and his message is hopeful, rather than paranoid.

McMullin is not my ideal candidate, but he is an example of how you can be a conservative presidential candidate who is concerned about the welfare of minorities, who avoids bombast and fear-mongering, and who demonstrates compassion. Those are qualities worth supporting. And unlike his closest 3rd party rival, Gary Johnson, McMullin is pro-life and supports religious liberty.

For conservatives like myself who cannot vote for Clinton, supporting McMullin over Trump is not about preserving our moral superiority, it is about laying a foundation for a future conservative party.

When we vote for Donald Trump, it is a signal to other politicians that the evangelical vote can be gained simply by offering lip-service to a pro-life platform. A man who has repeatedly defended Planned Parenthood and who was until recently pro-choice and who didn’t even bother to mention abortion during his nomination acceptance speech has received widespread evangelical support just for saying he’s pro-life.

Trump knows quite a bit about bargaining, and I suspect he’d say that evangelicals have just handed over all of their political influence this election by supporting him. Why should any future GOP candidate work to earn our support? Why should they care about our concerns? If we will vote for Trump, who will we not vote for? A vote for Trump is a vote signifying that evangelicals are owned by the GOP. Part of the tragedy here is that evangelicals are still a big enough voting bloc that we could prevent either candidate from winning the election.

Let that sink in. If evangelicals just said, “No, I refuse to be coerced into supporting candidates who do not meet a very basic standard,” we could swing the election. You probably read that sentence and immediately dismissed it, thinking something like, “That is a fantasy. The reality is people are going to vote for one of the two major candidates.”

A vote for Trump also communicates to our neighbors that we believe he would be an acceptable leader for our country. Sure, you can qualify your Trump support by saying you have reservations but you believe he’s better than Clinton; however, by casting a ballot for him you are fundamentally claiming that it would be good for Trump to govern you and your neighbor.

Most millennials and minorities find this thought to be repulsive, particularly because of the racism, nationalism, and hate that Trump has encouraged in his supporters. Please do not miss this point: many of our minority brothers and sisters in Christ are scared, hurt, or threatened by a Trump presidency because of the things he has said and the rabid support of open racists he has received. Listen to their concerns and consider how your public support of Trump might appear to them. If Trump becomes the image of the evangelical presidential candidate, we can expect many young people and minorities to feel further alienated and threatened by the church.

In addition, a vote for Trump communicates that he is an acceptable face for the GOP. Trumpism becomes the defacto politics of the right, particularly if he wins. We have already seen hints at this. Last year a bipartisan criminal justice reform bill looked like it would easily pass. The GOP House widely supported it, and with good cause. But with the rise of Trump, many representatives grew afraid of appearing to be “soft” on crime.

Paul Ryan is now fighting what is probably a hopeless effort to pass what most conservatives recognized to be a good bill because Trump had made “Law and Order” the new GOP platform. A simple look at the demographics in America reveals that racial minorities and millennials will continue to grow as a percentage of the voting population. And those are the exact two demographics that cannot stand Trumpism.

If we make him the face of the GOP today, we can expect evangelical voters to go elsewhere in the coming elections.

By voting for and publicly supporting Evan McMullin, you are helping to give the GOP a mandate to take the evangelical vote seriously and you are rejecting the pull towards a conservative party governed by racism and nationalism.

In the coming decades, what will matter far more than the promises of a dishonest man to appoint conservative justices will be the existence of a vibrant and influential conservative movement.

Join the conversation on Facebook
Tags:
None
Posted:
October 3, 2016

Evangelical Views of the 2016 Election: Not the Lesser of Two Evils, Choose Candidate Evan McMullin Instead