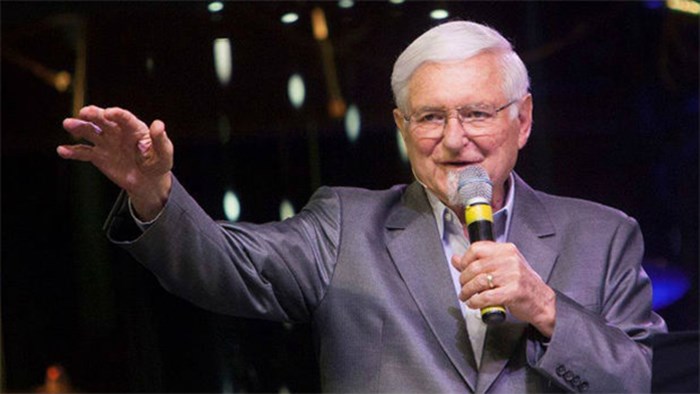 I was sad to hear Peter Wagner died yesterday. He was always a fascinating and brilliant man... and he loved the Church.

Who is Peter Wagner?

For those of you who don’t know who he was, I first knew him as a professor at the School of World Missions at Fuller Seminary. His Wikipedia article has more.

I remember when I first met him. He was lecturing at the Billy Graham School at the Southern Baptist Theological Seminary. If I recall correctly, he said that Thom Rainer and the Billy Graham School now had the “mantle” of the Church Growth Movement. (Peter was a key leader, if not THE key leader, in the Church Growth Movement before he moved on to other emphases.)

We started corresponding after that meeting. He once sent me a long email, walking through a book I wrote few years before his email, and being so encouraging. He contrasted my thoughts with his own (and others), always encouraging, and making me think. And it came out of the blue on a book I published many years earlier.

The Lives of Peter Wagner

I mostly knew him as a Missiologist and an academic. And yes, he (and Donald McGarvan) partly inspired me that a missiologist needs odd facial hair (true story).

Peter would later change his views and focus on things other than missiology and the Church Growth Movement and, yes, we disagreed. Interestingly, the book I co-wrote on spiritual warfare is, in some ways, a very different view than his and a response to some of the ideas he helped popularize.

But he was always a kind man and a friend.

For example, when I wrote a critique of some of his views, he reached out and said he was thankful for my interaction. Even when you disagreed (and we did), he was kind and open to different views.

They asked not because he was two-faced, but because he changed his views so much. If you showed up in the 80s, you met a very different (non-charismatic, for example), Peter Wagner who led the Church Growth Movement. In the new millennium, he largely is known for what would be called the New Apostolic Reformation.

For example, he wrote a book on leadership, Leading Your Church to Growth, that would be a great help to me as a young pastor.

Later, he wrote a book (and named a new movement) called The Third Wave, which I’ve written about extensively, explaining the term and sharing how it continues today.

Everyone quoted his church planting book, where he said “Church planting is the most effective evangelistic methodology under heaven.” I heard it quoted a few weeks ago, ironically attributed (incorrectly) to me.

And later in his life, as I mentioned, he would launch the New Apostolic Reformation, to much enthusiasm and controversy.

But what never changed was that he was a friend to many of us, even when we disagreed with early Peter and/or later Peter!

He was always a kind voice, looking for how God was at work, and seeking to celebrate what he saw as the move of the Spirit. And he loved the Church. Even his fascinating memoir, Wrestling with Alligators, Prophets, and Theologians: Lessons from a Lifetime in the Church, includes the word “church.”

I will miss his emails... and pray that his family will experience the grace of Jesus in their time of grief.

Join the conversation on Facebook
Tags:
None
Posted:
October 22, 2016