Race in America: Corporate Repentance, and the Cross We Collectively Must Bear 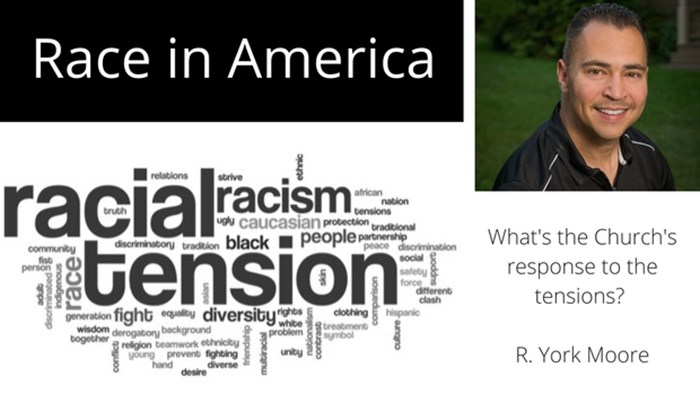 America has a race problem—and most Americans think it is getting worse. Unless you have been avoiding media, you’ve seen the news. But what is the Church to do and how are Christians to respond?

As always, the Church needs to speak prophetically when needed, and to care in moments when people are hurting. As Christians, we must step into the brokenness around us and be part of the answer to healing the problem of racial tensions that exist today. It is multi-layered and will take sustained and diligent effort to address. Yet the Church cannot simply stay in the shadows on issues related to justice and pain in our nation today.

We are running a series on Race in America with the hope that these posts will help us step back and consider how the Church can respond to these tensions today. What is the role of prayer, of repentance, of solidarity during these times?

I’ve asked African American evangelical leaders to weigh into this issue. In doing so, I hope that most of you, who are white evangelicals, will listen to Black evangelicals as they help us think discerningly on this issue.

R. York Moore is national evangelist for InterVarsity USA. He is the author of Growing Your Faith by Giving it Away and Making All Things New: God’s Dream for Global Justice. He is the founder of the anti-trafficking movement Price of Life.

Nothing has changed—that is, except body and dash cams, mobile live streaming, and YouTube. Likely, there has been no increase in racialized violence or abuses on the part of law enforcement. It’s just that now we can see it in 1080p as it happens.

Before now, we in the Black community would consider such events the unfortunate normal.

We live in a different world now, but it is unfortunately the same world when it comes to race. Our new world is merely showing us what we’d like to forget and presents a unique problem for Christians.

As a Black evangelical, my heart breaks twice—once for my people who feel invisible, worthless, and disposable. As a Christian leader, my heart breaks a second time over godlessness of so-called Christians in chat rooms, social media threads, and news forums who display much ignorance and un-biblical thinking around our racialized country.

Our race problem in America has nothing to do with gun violence, second amendment rights, socio-economic disparities, militarized police departments, or the decline in general civility. These are merely convenient scapegoats in our fear-filled and confused world that is looking for simple answers to complex problems.

Our problems are spiritual problems that go beyond the solutions of this world. For Christians, both our understanding of and our response to such problems must be deeper and costlier. Things have never been better and they have never been worse; nothing has changed except our awareness of a deeper problem that requires a deeper response.

So here it is: Quite simply, the epicenter of our race problem is sin—but not your ordinary, old-timey Jesus-on-a-flannel-graph-Sunday-school sin. In fact, it is our misunderstanding of sin that helps perpetuate systemic racialized injustices. No, our problem is a kind of sin that has been invisible to dominant-culture American Christians since the beginning.

The basic understanding of sin in the New Testament (Gr: Hamartia) is best thought of as a disease, a soul sickness. We know we have this ‘soul sickness’ because we see the fruit or manifestations of that sickness within us—things like lust, greed, violence, and envy.

These ‘symptoms,’ however, are almost only seen by American evangelicals through an individualistic lens. Our culpability is an individual culpability requiring an individual response. “I’ve sinned against God,” Christians reason, “I must repent to God,” they conclude.

Salvation for American Christians is a transaction between two individuals—themselves and God. This over-simplification of sin does not make sense of systemic, corporate evil, brokenness, and social maladies. American evangelicals reason that if someone is poor, perhaps it is due to his or her individual sinful choices. If someone is denied access to education, perhaps it is because of his or her work ethic or ability to work with others.

If Black men are shot dead in the street by law enforcement, perhaps it is because they had no respect or were involved in potentially dangerous behavior or gave law enforcement reason to be nervous. In any case, they were shot dead, even when their hands were up and backs turned to police, because of something they did, right?

When faced with race problems, most dominant-cultured evangelicals immediately get pre-occupied with the facts, the details of each case. The truth is in the details, we reason. There has to be a reason the officer shot—a gun in the car, previous knowledge of criminal activity, prior known violence…

We look to the individual circumstances while ignoring the environment that has evolved from systemic social maladies and corporate injustices. We jump to individualistic interpretations of each specific case. Christians often fail to take into consideration things like the disenfranchisement of African-Americans from wealth building through real estate appreciation as a result of being banned from purchasing property in appreciating markets until 1968.

We don’t take into consideration the transgenerational impact banking and land development policies had on locking Blacks into cycles of poverty, inadequate housing, and educational opportunities. We do this because of our overly simplistic theology. These and other systemic evils are a part of a much larger, more complex ecosystem of sin.

The problem is much worse than we thought, and the response is much costlier than we have imagined.

We are well past the time when reparations could ever make a dent in the long saga of systemic racialized evil, so how can we ever move forward? Here it is: In one word: repent.

We need to repent, but not in your old-timey, Jesus-on-a-flannel-graph, juice-and-a-cookie repent.

Corporate repentance of entrenched, systemic sin goes beyond hugging a Black person and apologizing for the sins of your ancestors (I hate this, by the way, so please don’t offer this to me).

To experience the healing and restoration I know is possible in Christ, our response must be deep, costly, and ongoing on all sides.

Here are a couple ways to engage the environments, cycles, and systems of injustice that disproportionately impact Black communities.

You get the picture, but all of these things are merely steps in a longer journey.

For Black Americans, our sin is often missed on the opposite side of the fence. We too quickly interpret sin based on context, history, or trends. We too quickly ignore or minimize personal culpability from context.

We reason that mass incarceration and senseless shootings in our streets are nearly always a byproduct of our racialized environment.

While we are often right, this tendency delegitimizes our voice and closes any potential for reconciliation—even when others are pursuing it!

In the midst of the rage that has come from the trauma of spilt blood in our streets, it is hard to offer forgiveness and to try again, but this is our burden, our cross that we must bear.

There is no alternative, and although it feels like we’ve exceeded 70 times 7, to be Black and Christian means that I must forgive, even when I know the same crime will likely be perpetrated again—even with my hands up.

Join the conversation on Facebook
Tags:
None
Posted:
October 13, 2016

Race in America: Corporate Repentance, and the Cross We Collectively Must Bear

Race in America: Corporate Repentance, and the ...