What Is Going On Inside Trump's Religious Advisory Panel? James MacDonald Speaks Out (Updated with More from James)

What James MacDonald is saying to the Trump campaign.
Ed Stetzer 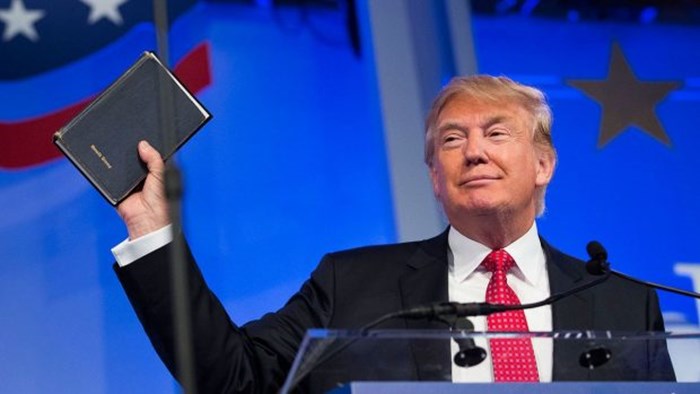 A few moments ago, James posted more information on the Trump advisory council (and his concerns) on his blog. In it, he provides more context to his comments, and I found them to be winsome and helpful.

In an article entitled, “Is Donald Trump Truly Repentant and Does It Even Matter?,” he listed three marks of true repentance and where they are lacking in Trump’s apology.

Repentance is Learned by Doing
Economists are familiar with matters related to the Federal Reserve. Issues of constitutional law are obvious to those who sit on the nation’s highest courts. What is easily discernible to a forgiven sinner and lifetime minister to others needing the same, is the difference between a contrived admission under pressure and a genuine expression of contrition that alters that person’s future. What Mr. Trump appears to have given, at least so far, is the former and I cannot not see the latter simply because I wish it to be so. To be more specific, the deficiency in Mr. Trump’s confession thus far centers around:

- Calling the recording of his words and reported actions “locker room talk,” versus actual immoral, deplorable, and in one case, criminal behavior.

- Attempting to avoid responsibility for his failure by shifting our focus to the sin of others, i.e. Bill Clinton, the media, etc.

- Failing to specifically name and seek forgiveness from the people directly injured by his actions, i.e. women he groped, pressured to have sex with, or otherwise objectified.

And, then he encouraged Trump toward true repentance:

Imagine the result if Mr. Trump actually had a ‘change of mind’ the literal meaning of repentance. Imagine if tomorrow or in the next debate he owned his behavior by saying, “I was wrong, I have no one to blame but myself, anything that anyone did, does not justify my own failure, I have no excuse, I am sorry.”

I’d exhort you to read his whole article and to hear his heart and his concern.

When Donald Trump announced his Evangelical Executive Advisory Council, the news coverage and commentary was quite loud. Many Evangelicals were very concerned about why these leaders would seemingly tacitly support Trump.

My social media feed lit up with criticism and condemnation for many of these leaders. Why, we ask, would they support Trump?

To be clear, Trump’s press release said these advisors had not formally agreed to support Trump, explaining:

The leaders on the executive board were not asked to endorse Mr. Trump as a prerequisite for participating on the board. Rather, the formation of the board represents Donald J. Trump’s endorsement of those diverse issues important to Evangelicals and other Christians, and his desire to have access to the wise counsel of such leaders as needed.

However, it indeed was seen as a tacit endorsement by many. And many Evangelicals are not particularly happy with how things have gone and how Evangelicals have been involved.

The lordship of Christ places constraints on the way his followers involve themselves, or entangle themselves, with earthly rulers.

Enthusiasm for a candidate like Trump gives our neighbors ample reason to doubt that we believe Jesus is Lord. They see that some of us are so self-interested, and so self-protective, that we will ally ourselves with someone who violates all that is sacred to us—in hope, almost certainly a vain hope given his mendacity and record of betrayal, that his rule will save us.

(For full disclosure, I should say that I was asked to be on the advisory council, and this perception was why I declined to be a part. Normally, I would be inclined to serve on any religious advisory council that does not require endorsement—and would actually take my/our advice. However, in this case, and because of how some might perceive my participation, I did not.)

How Advisory Council Members Are Responding

Endorsement or not, it is true that some on Trump’s council are still holding firm to their commitment to the GOP nominee. In a comment to CNN, Ralph Reed, head of Trump's religious advisory board, recently dismissed Trump’s comments in a recent video during a taping of Access Hollywood:

I've listened to the tape. My view is that people of faith are voting for president on issues like who will defend and protect unborn life, defund Planned Parenthood, grow the economy and create jobs, oppose the Iran nuclear deal. I think a 10-year-old tape of a private conversation with a TV talk show host ranks pretty low on their hierarchy of their concerns.

We don’t know what Ralph was saying behind closed doors, but I wondered what other members of the advisory board were saying, particularly after the events of this weekend.

This Sunday, I happened to be speaking at Harvest Bible Chapel while James MacDonald, one of the advisory council members, recovered from surgery. I asked James how he was responding and advising Trump’s campaign.

James drew my attention to an email he sent to several members of the faith council, the Trump campaign liaison, and also to others who oppose Trump’s candidacy. He gave me permission to share it because he was “making no effort to keep these things private.” (He copied people inside and outside of the campaign.)

James MacDonald’s Words to the Campaign

This weekend, James wrote of his concern that these widely-reported Trump comments are not to be treated lightly. He wrote:

Mr. Trump's comments released yesterday—though 10 years ago (he was 60)—are not just sophomoric or locker room banter. They are truly the kind of misogynistic trash that reveals a man to be lecherous and worthless—not the guy who gets politely ignored, but the guy who gets a punch in the head from worthy men who hear him talk that way about women.

He also drew some lines in the sand:

I have a wife of 33 years, a daughter, and 2 daughters in law. I am not able to offer my time any further without an obvious "change of heart and direction" [that] true believers call repentance.

And encouraged Trump toward true repentance:

If Mr. Trump isn’t seeking our counsel now— 1) to be repentant 2) on how to portray that repentance, then the idea of a faith council (which has deteriorated into influence brokering anyway) is really kind of a joke right? I have spent my life helping men get free from such disgusting commentary on women—even writing my doctoral dissertation on self-disclosure of sin among men. I cannot and will not offer help to a man who believes this kind of talk a minor error.

And it’s worth noting that he, and others in the group, are concerned that this pattern has continued.

No more defending Mr. Trump as simply foolish or loose lipped. Please pass this on to whomever you deem best.

I can assure you, having seen more of the conversation, James’ words are being discussed.

As of Sunday night, Trump still excused his comments in the video as “locker room talk,” which is only true if it is “locker room talk” about sexually assaulting women. Which, in fact, all should condemn, and condemn wholeheartedly.

And, of course, these are hardly the first offensive comments Trump has made, disparaging people (or groups of people).

You can debate whether someone should serve on that council—I did not and James did. Other leaders, some of who are friends and for whom I have respect, also did.

But I’m thankful that members of Trump’s advisory council are speaking into the situation, and I’m hoping that their advising is actually received by the candidate. I believe that truth spoken in love is a powerful witness that can change hearts, communities, nations, and the world.

May Trump have the humility to hear from the people he’s asked to advise him.

Join the conversation on Facebook
Tags:
None
Posted:
October 10, 2016

What Is Going On Inside Trump's Religious Advisory Panel? James MacDonald Speaks Out (Updated with More from James)

What Is Going On Inside Trump's Religious Advisory ...