Caring for refugees should be neither controversial nor partisan.
Ed Stetzer 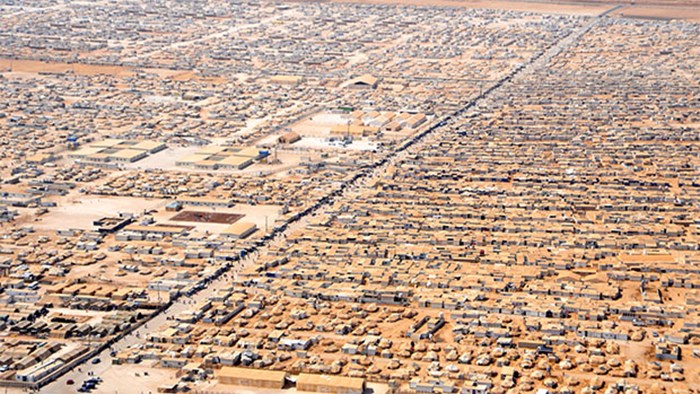 Zaatari refugee camp for Syrian refugees in Jordan
On the eve of Ramadan, Christianity Today visited with World Vision to witness the refugees living in the Bekaa Valley and working in Lebanon's fertile agricultural region. CT senior news editor Jeremy Weber writes of this country that is smaller than Connecticut and hosting 1.5 million refugees while the US debates resettling 10,000 Syrians. Read the article or pick up the September issue.

At the White House #WelcomeRefugees event last week, I found myself in a much-needed conversation. Ironically, this White House and I are, on many issues, ideologically far apart. But this time, I was there to talk about welcoming refugees.

This visit, my Evangelical faith and my historically Republican positions aligned me with the White House and progressive Democrats rather than my normal compatriots.

I joined a few Evangelicals, and a few dozen others involved in refugee resettlement, in a meeting where we actually heard from refugees and those serving them. Listening to White House Chief of Staff Denis McDonough speaking of our American responsibilities in the midst of this global crisis, I thought that at one time this could have been either a Republican or a Democratic administration, and Evangelicals would have been there, ready to serve.

Such a meeting wouldn’t always have been controversial. Evangelicals have had a long-term commitment to refugee ministry, caring deeply for the most vulnerable in the world. Republicans and Democrats used to agree on welcoming refugees.

Until this election cycle.

Now, caring about refugees has become both controversial and partisan.

Though I don’t think identifying as an Evangelical and as a Republican are always linked, they do statistically correlate. As such, I will speak to both groups – people like me – who need to find a better approach to discussing refugees. The urgency of this conversation is apparent, as leaders from around the world gathered for the U.N. Summit for Refugees and Migrants this week. It is time for leadership, specifically American, in the midst of this crisis.

Earlier this year, I asked Evangelical leaders to join me in declaring that we are not afraid to welcome refugees. Thousands responded, many of whom signed a powerful statement: “As Christians, we must care sacrificially for the refugee, the foreigner, and the stranger… In light of these Christian principles, we cannot allow voices of fear to dominate. Instead, we commit to actions of love and compassion for refugees who have been admitted into our nation(s) in refugee status.”

The document acknowledged security concerns and more, but the statement demonstrated that Evangelical leaders are ready to speak – despite the climate towards refugees among their constituents.

However, recent polls show that the overwhelming majority of Republican voters, many of whom are Evangelical Christians, are opposed to welcoming refugees into the country. A recent poll done by the Chicago Council on Global Affairs shows only 15% of GOP supporters are in favor of Syrian refugee resettlement in the U.S (Gallup, November 23rd 2015). And many of those Republicans are Evangelicals.

I suggest three ways to help Evangelical Republicans change their approach to the Refugee Crisis.

Facts matter here, and they clearly say that the refugee resettlement program has a remarkable history of safety and success. When we consider the requirements laid out, if someone want to do us harm, going through the refugee process is a foolish way to do it, when there are so many easier ways. As a matter of fact, almost 800,000 refugees have been resettled since 9/11, and the record of safety is impressive, to say the least.

We are in what will be – according to former Obama CIA Director Leon Panetta – a decades long war with radical Islamism. However, refugees are not causing the violence. They are actually the ones fleeing it. Almost all recent terrorist attacks in our own nation have come from long term residents or citizens, not new refugees.

Yet, most Republicans and Evangelicals are simply unaware of how scarce a threat refugees actually pose – largely because we haven’t heard the actual facts and listened to their tragic stories.

We’ve turned away refugees before – actually, we have a history of doing so in times of fear. And we’ve regretted such in the years that followed. As the government does its work, and the church takes its role, we can do better this time.

2: Evangelicals Need to Speak Up.

Evangelical leaders, pastors, and others, based on my observations, seem to be engaged in refugee ministry (and open to refugees) at a much higher level than the Evangelicals answering the polls. Perhaps decades of ministry to such marginalized people have connected them better to refugees.

Evangelicals also need to recognize the importance of our voice within the Republican party; recent history has demonstrated that our votes and endorsements are influential. As a Church, faith rather than fear must determine how we approach the refugee crisis, considering our nation as an arm outstretched to serve those in need. The voice of the church can only resound on the national stage if the church is willing to speak for those who cannot.

Evangelicals longing to live out Jesus’ story must advocate in line with the Sunday school question: what would Jesus do? How would Jesus care for the Samaritan – or the Syrian?

As we contemplate how best to care for these individuals, concerns related to safety certainly should remain relevant in the conversation. This administration, as well as the next one, must work diligently to earn and keep the trust of the American people as they prove themselves capable of effectively screening all refugees and migrants that cross our borders.

As various communities, including Evangelicals, become more confident in the vetting processes, they will find themselves approaching this issue without apprehension and fueled by a greater desire to open their homes and hearts to the marginalized.

The U.S. needs to lead, and right now it cannot; fear has caused this to become a partisan issue. If other countries are expected to be generous in their provision of resources and humanitarian aid, our nation must continue to do the same. As of late August, 10,000 Syrian refugees have been admitted into this country. That’s not leadership.

In addition, churches need to lead, and since one in eight Americans regularly attends an Evangelical church, Evangelical churches need to get involved. We can encourage American leaders to welcome more Syrian refugees in the coming months and years. We, together, can welcome refugees with a warm and loving embrace. Organizations like World Relief have continued to remind us of this through their hashtag movement (#WeWelcomeRefugees) as well as their continued support and care for the refugees.

The simple fact is that, like us, many refugee families fear the same things we do: radical Islamism. It is, after all, radical Islamism that contributed to the violence that propelled them to flee from their homelands; we really have more in common with each other than we are sometimes willing to acknowledge.

But someone needs to lead in the midst of this greatest refugee crisis in recorded history. That will require the government and the church, and we need to speak to both.

Earlier this year, on the day of our Evangelical refugee summit, we invited a recently resettled Syrian refugee to be interviewed. He spoke of his thankfulness for a new life far away from lawlessness and violence as well as love for his family. But he also spoke of the gratitude he had in his heart for those Evangelicals who helped him start a new life here in the United States.

Initially, when we planned our event, we did not know that the Senate would later schedule their debate about refugees on that very same day. Although votes on that issue were cast overwhelmingly along party lines, with my party voting against resettling refugees, Republicans did not have enough votes to change the law.

As such, I brought this courageous young father back on stage. I looked him in the eye and told him that this country – my country – still welcomed him, especially the Christians gathered before him in the room.

On that day, I was conflicted but thankful. I was thankful that my country still welcomed refugees by law, but disappointed that my party did not. And I left more convinced that I needed to speak as an Evangelical to my party, all while serving and ministering to refugees.

So, this week, I pray that President Obama will lead a global effort to care for hurting refugees, that Evangelicals will speak up to the Republicans driven by fear and not facts, and Evangelical churches will act by caring for the refugees that do come.

That’s what the Bible calls a “more excellent way” and it’s what we need today.

Join the conversation on Facebook
Tags:
None
Posted:
September 22, 2016