To be Turkish is to be Muslim.
Brian C. Stiller 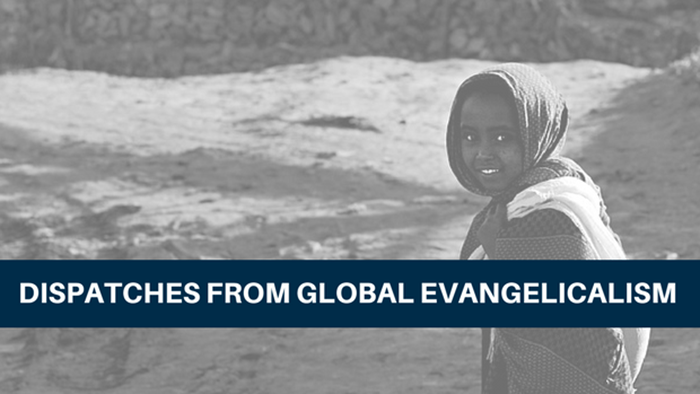 I am glad to give space regularly to my friend Brian Stiller so that he can fill us in on what’s going on around the world in the church, missions, and evangelism. Brian serves as Global Ambassador of the World Evangelical Alliance and is a regular contributor to The Exchange.

In the turbulent world of international politics, Turkey sits right in the middle. Here in the historic city of Istanbul, the stakes for one-upmanship are growing. On the day I arrived, the President of Turkey refused entrance to Americans.

There are times when my Canadian passport comes in handy.

As part of the old Syrian conglomerate of nations, Turkey is at a curious moment of decision: Does it want to be part of European success stories, or assert its role in creating an Islamic dominated caliphate? Or perhaps build its own bridge of Europe and Asia through Syria, Iraq, and around the Mediterranean to North Africa?

Into the mix come those who exercise the political craft of faith, learning to live with fidelity, integrity, and human ingenuity. And that’s why I’m here—to again visit those whose lives are close to the center of Christian witness.

Make no mistake about it. Turkey is one tough place to live out the life of Christ. One wonders whether the attributed words of Tertullian—“The blood of the martyrs is the seed of the Church”—really work.

Up to this point, not in Turkey.

At the turn of the 20th century, Turkey was about 20 percent Christian, mainly Armenian Christians. Today, the Christian population doesn’t even register on the census. Silas, a Turkish organization that counts carefully the numbers of Christians, says there are 5,000 evangelicals in the country with 150 churches that have an average Sunday attendance each of 50.

Turkey is a critical society in the witness of the gospel in the Middle East as it bridges Europe and Asia. The country is home to 79 million and has one of the largest Islamic populations in the world. It enjoyed enormous power as the Ottoman Empire from 1657 to the end of the First World War.

Since the Paris Accord of 1919 carved up the area, the underlying humiliation of its demise has fueled a renewed nationalism that links memories of power with Islam, fashioning with religious identity a patriotism and love for country. While that may be endearing to some, long term it spells danger. Turkey’s location, power, and strong culture will influence the region, just as it has over past centuries.

It was here that the apostles first established churches. Indeed, the seven churches in Revelation are in southwest Turkey.

The soil here is hard and its cultivation requires committed and resourceful people with long-term vision to loosen the soil so that seed can take root.

Four factors serve as resistance to the spread of the gospel.

First is the equation that to be Turk is to be Muslim and to be Muslim is to be Turk. This sort of equation, of course, finds itself in countries of other religions (e.g., in Greece, where it is assumed that if Greek then Orthodox, or in Thailand to be Buddhist). This also assumes that a Christian is a lesser person.

Second is the ID card on which one’s religion is noted. A few years ago, it was practically impossible to have that changed if one became a Christian. Today, it happens more frequently, but most in government and business leave their former designation as Muslim, for in changing, they are likely to be demoted or lose their job. And for sure, it will dim opportunity of moving forward. Fear inhibits.

Third is the government’s refusal to allow a local congregation to have a church building. Most are like the house churches in China, renting apartments or business complexes and creating small church-like facilities within larger buildings. The reason having a church structure is critical to gospel witness among Muslims is that it matters for Christians to be seen to have their own place of worship.

In the Islamic world, the mosque is central and highly symbolic in their faith. For Christians, not to have a place of worship diminishes them as a fringe religion or a cult.

Fourth is the lack of resources. While the church has moved increasingly toward indigenous leadership, contributions from converts are modest. Pastors are reluctant to teach tithing because of a frequent accusation among Muslims that Christians pay a person to convert.

The common story is that when Christians give you a Bible, they put a U.S. $100 bill inside of it. Such fictitious slander creates hesitancy among church leaders to move too quickly to teach about giving and generosity.

As a result, most churches are supported by outside sources. I visited Pastor Hakan Tastan at entrance to Life Guard Church in downtown Istanbul, a beautifully renovated facility seating 100 and housing a small café and offices, and learned that a significant amount of its funds come from North America.

While the plan is to decrease that dependency over a few years, it seems that the need for outside help is not going to diminish anytime soon. In fact, one could make the case that Turkey is in need of more assistance to create a media environment for teaching a deeper understanding of the gospel to new believers. Also, pastors can receive online training they need to fulfill their important role in the growing witness of the church.

When Soner Tufan came to faith at age 18, he had never met a Christian before and assumed he was the only Turk believer in the country. His journey toward faith began when he started taking taekwondo martial arts from a Korean missionary.

Invited to his teacher’s home, he saw a Bible and asked what it was. After many questions, Soner realized he didn’t really know Islam and so began to read the Qur’an. Over time, his growing understanding of the love of the Father was so compelling that he turned to Christ.

The usual family exclusion took hold. His father said, “No more money for the bus. You’ll walk to school.” So Soner began a two-hour walk one way to school, praying and memorizing Scripture. Today, Soner is president of the Shema Media Group that airs radio programs throughout Turkey and chairs TURYAD, the national radio and television broadcasters’ association.

While the government asserts that there is religious liberty, the Evangelical Alliance of Turkey (Association of Protestant Churches) is in a nonstop battle to win fairness and religious liberty in the courts. General Secretary of the Evangelical Alliance, Umut Sahin, spends his time resisting accusations, local and national government restrictions, and roadblocks. The latest court-centered work began in 2007, when three employees of the Zirve Bible Publishing House in Malatya were tortured, tied up, and their throats were cut. It took 115 hearings and 9 years for the killers to be convicted.

An American pastor, Andrew Brunson, was recently imprisoned on the charge of gathering secrets for espionage. After 23 years as a Presbyterian pastor in Izmir, he has become a pawn in the hands of the government to leverage the U.S. to return the Turkish cleric Fethullah Gulen who lives in the U.S., wanted in Turkey for alleged attempts to take down the government.

Out of this struggle for human and legal fairness have emerged two evident realities. First, in the wider society, the killing of Christians and the pushback of evangelicals on legal grounds have provided a public profile and afforded Christians a new image and understanding in the media. While this is helpful, there is a fear among nationals that this may serve to handcuff Christians and inhibit those from outside who wish to serve in Turkey.

I sat one evening in a small church on the fourth floor of a commercial building in Istanbul, visiting with the pastor and a few of his flock. We were only a few miles north and west from the sites of early churches the Apostle Paul planted and visited. This was a reminder that even if the Christians are in potential danger, especially in countries such as Turkey, there is always the well of hope that never stops springing out its life.

Join the conversation on Facebook
Tags:
None
Posted:
December 30, 2017