What are these "Five Solas" and Why Do They Even Matter? An Interview with College Church Pastor Josh Moody 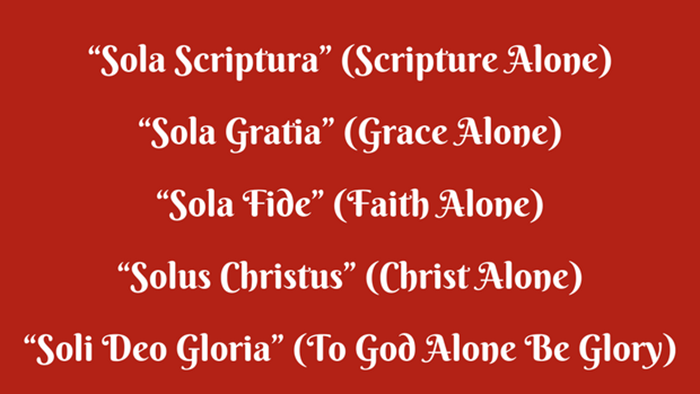 Josh Moody is the pastor of College Church. We’ve become fast friends and I drive (or walk) by his church at least five times a week. It’s a great blessing to our community and has a long and powerful history.

Josh and I have been discussing theology, and often have come back to the solas. We are even doing a conference together around the solas. But it seems to me that, outside of Calvinistic circles, people don’t talk about the solas much—and they need to. As such, I asked Josh a bit about it—but first I wanted to ask what it is like to pastor a church like College Church (formerly pastored by Kent Hughes, for example).

Being a pastor anywhere is a great joy and a great challenge, but pastoring a historic church is probably fascinating in its own way. There are reasons things have been done a certain way for a long time, and you have to learn them as you go. And, of course, you stand on the legacy of those who came before you (like Kent Hughes in my case), but you also are called to lead the church in a new era with new plans. But, it’s a great blessing to have such a heritage, but also such a great future.

Of course, pastoring is always a challenge. I had someone who jumped into help us with something this week observe my daily working patterns and said ‘hey do you always work this hard?’, to which the reply was ‘yeah, pretty much.’ Pastoring is dying, being the scum of the earth; it’s a serving job, it’s not a look-at-me-aren’t-I-great job. The humanity in us all sometimes baulks at being a living sacrifice, and we all have to find ways to get low and serve. And then, strange paradoxical truth of the GOSPEL, when we do get low and serve we find THERE Is Joy!

I’ve come in and visited the church a few times, and you are a strong preacher—at a church known for such preaching. Why is that important?

I’m what’s called an “expository” preacher. That means that my goal is to get out of the way and let the Bible do the talking. I have a fairly broad, and I hope charitable, definition of what it means to be an expository preacher, and a very passionate and thorough-going commitment to that task so defined. Basically, I think that if you are saying what the Bible passage is saying then you are explaining the Bible passage and that is “expositing” (or “exposing”) it.

Some people think of expository preaching by a certain style: verse by verse, pericope by pericope, very long sections, very short sections, three points and poem. But the truth is you can do all those styles and not say what the Bible says, or your style can be really very creative and dynamic and you can say what the Bible says. I’m a content not a form guy.

What I want to hear from the people I train is: our resolve is to preach nothing but Christ and him crucified. And this is our charge: Preach the Word. I used to have that phrase “Preach the Word” going around and around on my screen saver when I was first starting out as a preaching pastor in a church revitalization. The temptation would have been to have run everywhere and do everything. As I saw it, and still do see it, my main contribution to the health of a church is to preach in the power of Christ, if he so wills, and keep it simple and straight as much as I can.

I like what Spurgeon said: Jesus told us to feed his sheep, not his giraffes. So it’s important we keep the cookies on the bottom shelf. Sometimes that means the egg-heads think we’re not being technical enough. I’d rather reach the people than impress the experts.

The “Solas” are a shorthand way that Christians developed to describe the distinctive message that came about through the renewing and reforming influence of people like Martin Luther, John Calvin, and many others. They are a useful “hook” to help us define, defend, and pump out the message of the gospel globally, to every culture and class and people to the glory of God, and preach that message to ourselves and be increasingly transformed by it.

Why is the Reformation still relevant today? Isn't it clear where we stand as Protestants?

If only! I think we often confuse “labels” with “substance.” It doesn’t really matter what “label” you have; what matters is what comes out of the heart. There are people who hold onto various convictions with great doctrinal precision but have lost the spirit of the truth they say they believe—straining at gnats and swallowing camels. They are others who don’t care much about truth at all in our relativistic age. He who is not against us is for us; it’s not about drawing lines and making enemies. It’s about encountering Christ in all his Risen Power, and being transformed by the work of His Spirit through His Word. There are parts of what Luther said I don’t agree with; ditto what Calvin said. But there is this thing called “The Gospel” that the Reformation (re)discovered, and which we in every generation must (re)discover and embrace once again. I like to say that I’m biblical not “Calvinistic”; or that I’m a Calvinist like Paul was.

You seem focused on the next generation with God Centered Life—is there something about them that needs to be "sola" focused?

As a pastor I have a heart for people of whatever age. My role is to shepherd the sheep. I do want to say as LOUD and as CLEAR as I possibly can in the power that God gives me that the way forward for the church is to center on God and his gospel.

But the God Centered Life ministry has been focused on younger Christians to understand the God-centered life. That’s why we are doing the conference where you are speaking—helping younger adults (and others) understand what being God-centered really matters. That’s part of what I was passionate about in writing 7 Days to Change You Life.

As Josh mentioned, I will be with him at One Night Centered on God. 500 years. 5 Solas. ONE night. March 17. Speakers include Phil Ryken (Scripture Alone), Josh Moody (Faith Alone), me (Grace Alone), Ajith Fernando (Christ Alone), and Bryan Loritts (Glory to God Alone). The Gettys are leading music, which means my friend Keith Getty will be there (and we will probably go out to Muldoons after since he always makes me take him to an Irish pub so I can have a Diet Coke).

Join the conversation on Facebook
Tags:
None
Posted:
February 25, 2017

What are these "Five Solas" and Why Do They Even Matter? An Interview with College Church Pastor Josh Moody

What are these "Five Solas" and Why Do They Even ...