Chaplain: They Jeered My Prayer in Jesus' Name at GOP Town Hall. Here's My Response. 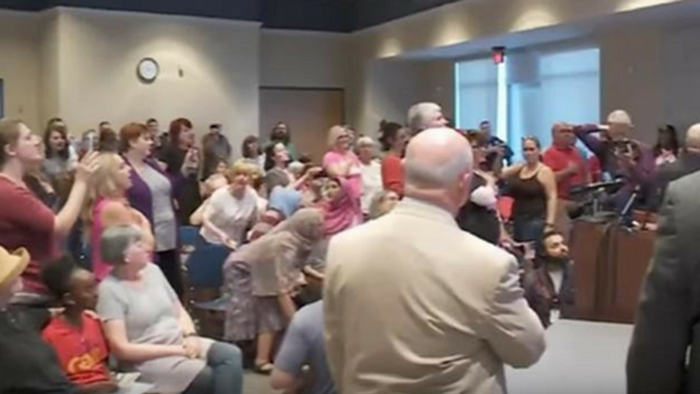 Image: cbn.com
This morning I interviewed Dr. Michael Sprague, Louisiana State Chaplain with the Capitol Commission, who last week was jeered at a town hall meeting by protestors when he went to pray. These protests have been taking place across the nation, but this one took a rather agressive turn against the chaplain praying and the veteran leading the pledge.

I invite you to read this article about it and be sure to watch the video. Michael’s words are a powerful reminder that our world is need of the Jesus who will wash us clean and give us new life.

Ed: What happened last week when many at the town hall meeting started to protest during your prayer?

Michael: I’m a chaplain of the state of Louisiana with a group called The Capitol Commission. I was asked a week earlier to come in, like I often do at events throughout the state. For decades, most of our events have opened up with an invocation of prayer followed by the Pledge of Allegiance and then whatever the event is.

I fully expected to ask the blessing upon the meeting, have a sense of dependence on God and in God we trust, together we would say the pledge, and then the meeting would proceed. However, there were about 800 people present, and only 200 seats available. It was a crowd that was amped up at the start, and when Senator Bill Cassidy arrived, I kicked things off with prayer. However, there was so much shouting and chaos that I paused for a moment to see whether I should start.

It was clear after a while that it wasn’t going to stop, so I proceeded with the prayer. As I prayed in Jesus’ name, there were shouts of “Lucifer” and “separation of church and state.” Some people referred to me as a Nazi. That was the atmosphere during the prayer time. During the pledge, there was also a little disrespect. Many people turned their backs or shouted during the pledge, dishonoring the time.

Ed: Were there other factors that came into this? Many people remember the Democrats supposedly booing during the DNC when in reality the booing was because of other issues. Did something similar happen here? Or were they actually booing you for praying?

Michael: Many who came seemed to have some honest concerns. Certainly, people had strong political opinions. I think it was an organized protest at least in large measure. Some people were coming I believe not to have a dialogue and a conversation with Senator Cassidy, but were there to be as outrageous as possible and make these town hall meetings look like chaos.

Definitely, however, the highest point of intensity in the entire program was the reaction when I prayed in Jesus’ name.

Ed: Why do you think the greatest point of contention was when you prayed in Jesus’ name?

Michael: I believe many of those who were there illustrate the move that is occurring spiritually in our country and our need for a spiritual awakening. There are several different worldviews. The worldview that would come about from people who honor “in God we trust,” pledge “one nation under God,” and honor the name of Jesus is very different from alternative and/or competing worldviews.

In the extremes, there can even be hatred towards Jesus. I’m sure that some of it was just people caught up in the political nature of the meeting, so I don’t want to say that everyone was opposed to Jesus. People ask me all the time if I am mad at the people seemingly speaking out against God and Jesus. My answer is that I’m not mad, but I am sad that it has come to this in our country.

To me, it shows the need for spiritual awakening.

We need to remember that Jesus has been booed many, many times and He will be booed again. But when I was praying in the name of Jesus, I was not praying a political prayer or a religious prayer; I was simply praying in the name of a very real person named Jesus who says to love your enemies, care for the poor, and turn the other cheek.

Jesus was the one who hated the hypocrisy of religiosity, and Jesus was the one who sacrificed everything He had so every human being could have peace with God and the potential to have peace and reconciliation with each other and build bridges. And the Jesus I was praying to does not have weapons of hatred, anger, guns, and knives.

Jesus’ weapons are a blood-stained cross, an empty tomb, a lot of scars on His back, and love. His message was so powerful that He had a bunch of ragamuffin followers who entered into a revolution of love that turned the world upside-down.

So I’m not mad. In fact, with every single person there, I would love to pray with them that that if they get tired of this old life, they would hear Jesus say the words, “Come to Me, all of you who are weary and burdened, and I will give you rest.”

Join the conversation on Facebook
Tags:
None
Posted:
February 27, 2017

Chaplain: They Jeered My Prayer in Jesus' Name at GOP Town Hall. Here's My Response.

Chaplain: They Jeered My Prayer in Jesus' Name at ...