Director of the BGCE Evangelism Initiative offers a guide on where we begin.
Dr. Jerry Root 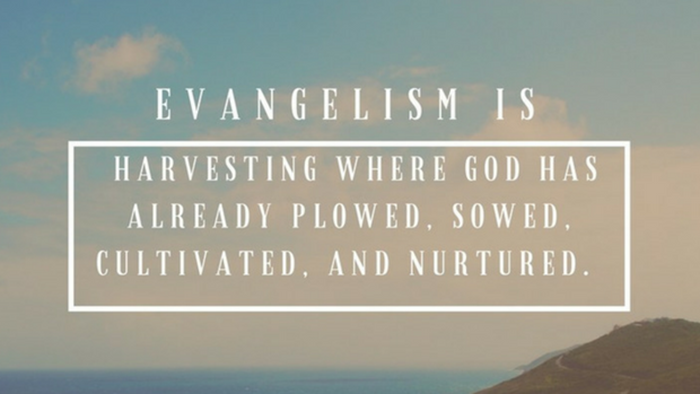 We do not take Jesus to anyone. He is already present, at some level, in everyone’s life.

How could it not be so given the omnipresence of God? Furthermore, because He is a God of love, He is near every person you meet, loving and wooing him or her.

We do not go to bring Jesus to anyone; instead, we go to make explicit what He is already doing implicitly.

Jesus Himself said, “The fields are white unto harvest.” The problem is not that people will not respond to Christ, but rather that Christians seem unwilling to go. How can we enter into the work that God is doing already?

I think we can begin by asking more ‘public’ questions: What is your name? Are you from here? Listen to the answers, and in those answers come permission to ask new questions based on the information that is given. Let me share a few examples.

Not long ago, circumstances put me alongside a man in Chicago. I asked him, “What’s your name?” He answered, “Peter.” I asked, “Peter, are you from Chicago?”

These were public questions, unthreatening and neighborly.

Under my breath, I whispered a prayer for Peter that I might enter into God’s love for him and that I might listen well. Peter said, “No, I was born and raised in Albuquerque, but when I was 12, my parents divorced and I moved to Chicago with my mother.”

Peter did not have to confide all of that to me. He could have said, “I grew up in Albuquerque and moved to Chicago when I was 12.” That would have given me plenty of information and with it, permission to inquire further along the lines he disclosed.

If he would have said nothing about the divorce, I would have had enough to ask, “Wow, how was that to move across the country when you were on the very threshold of adolescence, leaving behind the secure environment of your boyhood friends and familiar haunts?”

That would have been plenty to open up the conversation on non-threatening lines, going deep with each answer in the hopes of discovering where God was already tugging in Peter’s heart.

But he told me he moved when his parents divorced.

I responded, “That sounds like it was painful.” He opened up his heart and began to tell of a father who abandoned the family, never remembering him on his birthday and at Christmas. At each place where he supplied information, I listened.

And after everything he shared, I asked questions appropriate to the depth he would allow.

In time, he told me that he struggled with bitterness towards his father and he didn’t like what that was doing to his own outlook and attitudes.

I began to see where God was wooing him and eventually interjected, “The power to forgive in order to untether from past wounds and sorrows is a precious commodity.” Peter agreed, and asked, “Yes, but how can we do it?”

It was at that point in the conversation that he gave me permission to discuss where the power to forgive comes from. In fact, the conversation opened up and I was able to share the gospel with ears not merely willing, but eager to listen.

How did the conversation get to that point? It occurred by first believing that God was already present, loving and wooing Peter to Himself. Second, the opportunity opened up when I asked public questions and listened carefully. Third, I asked follow-up questions along the lines where Peter opened up his heart.

This is not a hard thing to do. It grows through practice.

Another time I met a woman in the Vienna airport. I was in the gate area waiting for a flight that was delayed a couple of hours. This young woman came into the gate area wearing a lanyard with a name tag. She was also carrying a clipboard and going from passenger to passenger asking questions in German. I assumed she was taking a survey for the airport.

Sure enough, she made her way to where I was sitting and informed me, in flawless English, that she was taking a survey. I asked what her name was. It was a public question, and she answered, “Allegra.” I asked, “Allegra, are you from Vienna?” She answered, “No, I grew up in southern Austria.”

With that answer came the permission to ask, “What brought you to Vienna?” She said she was a student. This opened the door to more questions. Where did she go to school? What was she studying?

After 20 minutes or so I knew a good deal about Allegra. I knew her mother abandoned the family to go to Canada with her lover. I learned her father’s bitterness was toxic. I learned her brother also attended the University of Vienna, but that they were estranged.

When I expressed my sadness for what seemed to be a good deal of isolation and estrangement from the people closest to her, she said it was far worse than she confided. I asked, with her permission to do so, “How was it worse?” She told she had a boyfriend who went to study art in Florence for six months. He asked her to wait for him, and she did so. Her boyfriend returned the very day before I met Allegra only to inform her he met somebody better in Florence.

I knew where God was wooing her, and I know the deep felt need where Allegra was likely to hear the gospel. After 20 minutes, she had not asked me one question. I said to her that I knew she had a survey to fill out but that I had been sent to tell her something. She wondered if I was a plant, put there by the airport, to see if she was doing her job. I assured her it was nothing like that, but I had something to say to her once she finished her survey questions.

Knowing that Allegra felt abandoned and betrayed, I said to her, “Allegra, the God of the universe knows you and loves you; He would never abandon you or forsake you.” I said it to her again: “Allegra, He loves you!”

Sometimes, it takes three times before the words sink in, so I said it again: “Allegra, He loves you!”

After the third time she burst into loud sobs. Everyone in the gate area was looking in our direction. Through her tears, Allegra blurted out, “But I’ve done so many bad things in my life!” I responded, “Allegra, God know all about it and that’s why He sent Jesus to die on the cross for all of your sins and to bring you forgiveness and hope.” I was explaining the gospel to ears willing to hear and a heart willing to receive.

These are the things I try to teach my students here at the Billy Graham Center for Evangelism at Wheaton College.

First, believe that you do not have to take Jesus to anyone, He is already there.

Second, we go to make explicit what He is already doing implicitly.

Fourth, we listen to the answers and find in them the permission to go deeper. Eventually, we connect the gospel at the very point of deep felt need.

Evangelism is harvesting where God has already plowed, sowed, cultivated, and nurtured. We go where He has gone before us.

Jerry Root is a professor at Wheaton College and serves as the Director of the Evangelism Initiative as well as being a faculty/scholar at the Billy Graham Center for Evangelism. Jerry teaches graduate and undergraduate courses in evangelism and Christian formation and is a visiting professor at Talbot Graduate School of Theology and Biola University.

Join the conversation on Facebook
Tags:
None
Posted:
February 17, 2017