Many Evangelicals voted for Trump for the Supreme Court, so let's stop painting them with every other brush
Ed Stetzer 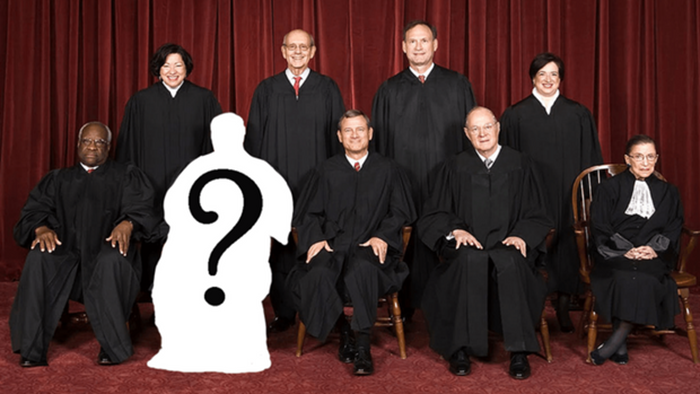 Today, President Trump nominated a new Supreme Court Justice. Neil Gorsuch is, as the President promised, in the mold of Antonin Scalia.

That’s what many Evangelicals were hoping—and why many voted the way they did.

During the announcement, President Trump indicated that he knew this was the most important issue for many people, and he’s right—it certainly was for Evangelicals. (Christianity Today tweeted he was an “Evangelical favorite” and the CT article is here.)

James Carville famously said, during the Bill Clinton campaign, “It’s the economy, stupid.” For many Trump-voting Evangelicals, it was the Supreme Court.

A lot of times during the campaign we would ask why on earth would conservatives— really hard core conservatives—back someone like Donald Trump and work so hard for him? This is why. Because that is not the person that Hillary Clinton—if she were president—would be putting on the bench. Not even close… So much of this election… [was] about this. [bold / italics added]

Simply put, the Supreme Court is the reason that many Evangelicals voted for Trump.

In fact, in a Christianity Today article, 70% of white Evangelical voters said the Supreme Court appointment was a top election concern, listing among others terrorism, the economy, immigration, foreign policy, gun control, and health care. The Supreme Court nomination is a critical position to fill in light of the changing political and societal changes we have been facing.

In fact, as Christianity Today explained a Pew report (before the election), many were voting against the alternative, not for the candidate: 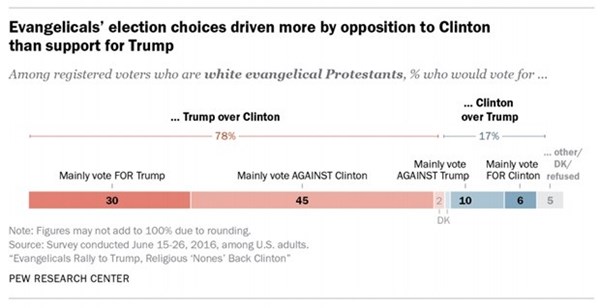 Some people need to get honest about why many Evangelicals voted for President Trump.

Let me add that I don’t have a personal stake here.

I did not publicly support Trump, Clinton, or anyone else. Furthermore, I’ve written a number of articles criticizing Evangelicals who recently changed their views about the importance of character for public officials. I’ve written that white Evangelicals should find more ways to build new bridges to people of color after the election. Even this week, I expressed concern about President Trump’s new refugee policy. So, I’m no shill for President Trump.

But I’m tired of seeing Evangelicals who voted for Trump slandered for choosing between the two major candidates they had.

For many Evangelicals, it’s the Supreme Court, stupid.

I’ve grown weary of the untrue and unfair accusation that all Trump voters are racists, misogynists, and xenophobes because they voted for Trump. (In the same way, I am weary of claims that anyone who votes for a Democrat automatically supports the radical abortion views of the Democratic party.)

People make decisions from the choices they have—and many Evangelicals chose the Supreme Court as they voted.

I can’t say that there are not Evangelicals who voted for reasons I would find inappropriate, but I do know that almost all the Evangelical Trump voters I know voted for Trump, at least in part, because of the Supreme Court.

I understand that the desire of some on the left, including the religious left, is to hang everything Donald Trump does on Evangelicals. I get that it is satisfying for some to put all Evangelicals in a “basket of deplorables,” but Hillary Clinton apologized for that. We too should be reminded that that’s not a great strategy—particularly for Christians speaking of other Christians.

“I Thank Thee That I Am Not An Evangelical Trump Supporter”

Trump voters are not Trump. They are not responsible for everything he has done, is doing, or will do.

Many religious leaders have looked down with scorn on Evangelical Trump supporters. But sometimes religious scorn comes far too easily from people of faith. And the rhetoric we Christians are spewing lately seems to follow after the model of the world—without a regard for the whole truth.

On both sides of this great divide, we have lost our ability to see our fellow Christians who may stand on opposing sides of the voting booth as those made in the image of God.

Let me say it again: Trump voters are not Trump.

Before the election, I wrote:

The ones I do know don’t hate immigrants (though they think illegal immigration is an economic and criminal problem), think a multicultural society is a good thing (while they are quite tired of politically correct speech codes), and they really do want what’s best for the country (though we might differ on what that is)...

Evangelical Trump voters made a choice and many of them saw today, with the nomination of Neil Gorsuch, that their choice was validated. They voted for the sanctity of life and for religious liberty. And they believed that Hillary Clinton would have appointed a justice who would have continued to pull the nation away from those fundamental values.

And, for many of them, it was inconceivable to vote for Hillary Clinton. Slate Magazine explained in an article, “Why Hillary Clinton Bombed With White Evangelical Voters”:

Clinton’s stance on abortion was even more off-putting to many evangelicals. In 2007, Clinton was still echoing her husband’s mantra that abortion should be “safe, legal, and rare—and by rare, I mean rare,” as she told a pro-life pastor at a faith forum on CNN.

This was the conciliatory language adopted by Democrats during the ’90s culture wars. But by this year, Clinton had dropped the “rare” and was accentuating her support for overturning the Hyde Amendment, which prevents federal funds from being used to pay for most abortions...

Stetzer pointed out that her first speech after winning the Democratic nomination this summer was at a Planned Parenthood event. “It was as if she was trying to alienate evangelicals,” he wrote in an email, “and it worked.”

If we are to understand those who voted differently than we might have, then a good first step is being honest about their intent. Many voted against Clinton, and a major reason why is because they wanted someone else to be making tonight’s announcement.

Donald Trump is our President now.

He is going to make some decisions with which we disagree, and others that we will appreciate.

And, whatever we may think about Trump, we can’t—we mustn’t—paint each other with a broad (and often dishonest) brush.

When we start with the idea that every Trump supporter is personally and individually a racist, xenophobe, and misogynist, we are simply being dishonest. Furthermore, we are ending any chance for national unity, let alone the unity that Christ calls us to have as the Church among those of us who are Christians.

Elections are tricky things. All voters make choices, looking at the positives and also the negatives, to vote their conscience. You have to chose from the candidates you have, not the ones you want. (And 81% of white Evangelicals did not vote for Trump in the primaries.) But, in the general election, you make a choice from the finalists.

That’s what Evangelicals (and everyone else) did.

Whether you agree or disagree with their choices, let’s be honest about their motives.

Tonight, particularly after this week, some will say that voting for Trump was not worth the Supreme Court. Others will point out that the Supreme Court will shape this country for decades beyond President Trump.

Either way, an honest look at why many Evangelicals voted the way they did might be a good place to start a better understanding.

Join the conversation on Facebook
Tags:
None
Posted:
January 31, 2017

Searching for Gorsuch: For Many Evangelicals "It's ...