Towards Missional Effectiveness: The Mark of Multiplication (Part 6) 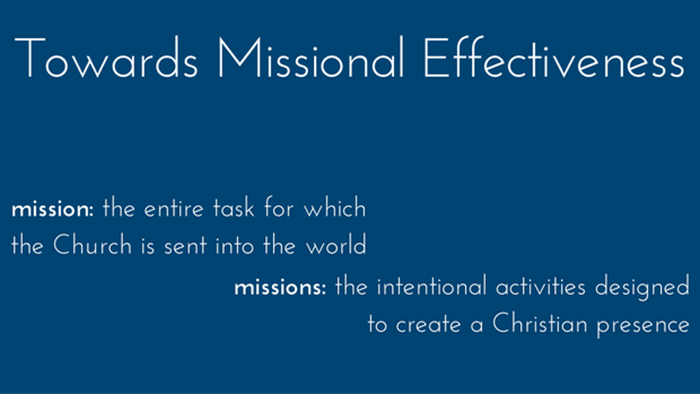 I’m in a series covering the topic of missional effectiveness. In the previous two posts, I have explained the marks of God’s mission. What I have sought to do is stress the major foci of each mark in an effort to build a visual of the enactment of the message and movement of mission. Today, I’ll cover the missional mark of multiplication.

The Missional Mark of Multiplication Explained (1)

Thus far, I have attempted to outline the missional marks of community and sentness when the missio Dei is enacted in a local church. But there is one more missional mark that is enacted when the church embraces the totality of God’s mission, and that mark is multiplication.

Multiplication is used by God to advance His mission throughout the world. While the impulse of multiplication is hinted at in the OT in places like Genesis 1:28 (“be fruitful and multiply”), Genesis 15:5 (Abraham’s infinite number of offspring), and Jeremiah 29:6, it becomes very clear in the New Testament.

The missional mark of multiplication, particularly in the New Testament, rests upon Matthew 28:18–20, Acts 1:8, Acts 9:15, and Romans 15:20. In these passages, it is clear that God’s mission extends outward to the nations—to those who have not heard the gospel.

The Apostle Paul clearly understood this. In fact, Paul saw God’s global mission connected to an aspect of God’s covenant with Abraham. Paul writes to the churches of Galatia, “Now the Scripture saw in advance that God would justify the Gentiles by faith and told the good news ahead of time to Abraham, saying, all the nations will be blessed through you” (Gal. 3:8). (2)

By understanding the mission of God as being directed towards the nations, Paul implemented a missions strategy that included targeting populated urban centers, evangelizing the city (micro multiplication), and planting and establishing churches (macro multiplication).

According to Eckhard Schnabel, there are [at least] fifteen phases or locations of Paul’s missionary work that took place in 35 years between his conversion (31/32 AD) and his death in Rome (67 AD). (3) During those years, Paul had three missionary journeys. (4) As Paul went to the nations, he would go to their cities.

Tim Keller asserts that part of Paul’s mission strategy included going to the largest cities of the region. (5) Very seldom do we see Paul navigating away from cities. It seems Paul believed that cities were where the potential for gospel impact and gospel multiplication would be greatest. (6) Alvin Reid expresses that if churches reach the cities, they’ll reach the world. (7)

It seems that Paul thought that as well.

Once in the city Paul did at least two things: evangelized people and planted churches. Paul evangelized through preaching at the local synagogues, participating in small group Bible studies, meeting people in the marketplaces, renting halls and lecturing, and engaging people in his profession (tent-making). (8) As he made disciples, he would then plant and establish churches.

Keller summarizes Paul’s missional engagement with the cities in this way:

As seen in the life of Paul, multiplication requires intentionality. It requires going to where people are, sharing the good news of Jesus, and planting and establishing self-supported, self-governing, and self-propagating churches.

The Missional Mark of Multiplication Exemplified

The church in Antioch exemplifies the missional mark of multiplication. They multiplied exponentially in Antioch—reaching both Jews and Gentiles. Not only did they multiply in Antioch, but they also reached beyond their city. Antioch became the first sending church by sending the first missionaries and becoming the first church-planting church (Acts 13:1–3). Simply put, they became a multiplying church.

(1) I have adopted some of this material from an article that I wrote for Evangelical Missions Quarterly (EMQ).
(2) For more information on Paul’s understanding of the OT expectation of God’s mission to the Gentiles, see Köstenberger, Salvation to the Ends of the Earth, 164–66.
(3) Eckhard J. Schnabel, Paul the Missionary: Realities, Strategies and Methods (Downers Grove, IL.: IVP Academic, 2008), 40.
(4) See Peter Bolt and Mark Thompson, eds., The Gospel to the Nations: Perspectives on Paul’s Mission (Downers Grove, IL.: IVP, 2000), 102; Schnabel, Paul the Missionary, 40.
(5) Tim Keller, Church Planter Manual (New York: Redeemer Presbyterian Church, 2002), 29.
(6) Schnabel believes “that it is a significant overstatement to say that Paul’s passion was the planting of churches in metropolitan centers or in the ‘strategic cities’ of the Roman Empire” (Paul the Missionary, 281). However, David Bosch argues that Paul was engaged in “Zentrumsmission,” that is, mission in certain strategic centers. He writes, “These ‘metropolises’ are the main centers as far as communication, culture, commerce, politics, and religion are concerned. To say that Paul ‘did not think in terms of individual ‘gentiles’ so much as ‘nations’ is, however, misleading and, actually, an anachronism. Paul things regionally, not ethnically; he chooses cities that have a representative character. In each of these he lays the foundations for a Christian community, clearly in the hope that, from these strategic centers, the gospel will be carried into the surrounding countryside and towns” (David Bosch, Transforming Mission: Paradigm Shifts in the Theology of Mission, American Society of Missiology Series 16 (1991; reprint, Maryknoll: Orbis, 1999), 130.
(7) Alvin Reid, “Reach the Cities, Reach the Nations,” n.p. [cited August 5, 2015]. Online: http://www.evangelvision.com/reach-the-cities-reach-the-nations/.
(8) Tim Keller, Center Church, 355.
(9) Ibid., 356.

Join the conversation on Facebook
Tags:
None
Posted:
January 6, 2017

Towards Missional Effectiveness: The Mark of Multiplication (Part 6)

Towards Missional Effectiveness: The Mark of ...