Ghost Towns and Small Towns: Church Planting in a Boom and Bust World 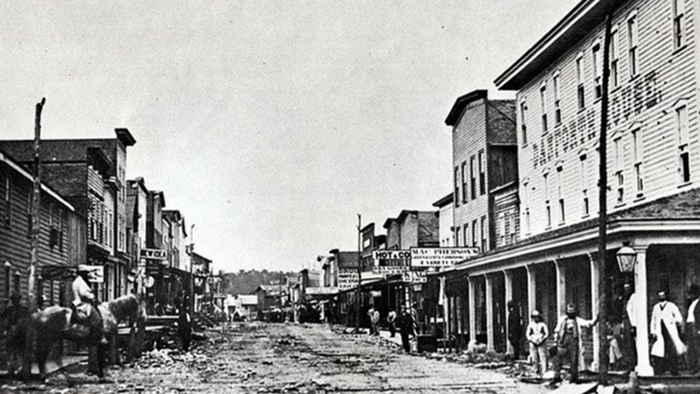 About 20 minutes from where I live, one can find the unfortunately named town of Pithole. At least one could have found the town had one been looking between January 1865 and August 1868. During these years, Pithole came to signify life in a boom and bust world.

After the first successful oil well was discovered on the bank of Pithole Creek in January of 1865, people rushed to the area seeking their fortunes. Some sought oil; others hoped to separate men from their new money. As oil boomed, so did the population, which grew to 2,000 by July of 1865 and nearly 20,000 by that December.

Within two years, the town counted over 50 hotels. Some were mere rooming houses. Others boasted luxurious amenities. By September of 1865, Pithole even had a three-story theater with seating for 1,100.

By 1868, however, two devastating fires, failing oil reserves, and a local financial panic had triggered a mass exodus, leaving only a little over 200 residents in the once-vibrant town. Pithole’s borough charter was annulled in 1877 and the land that had originally been sold for $100,000 and made its investors millionaires was sold back to Venango County for $4.37. Today, Pithole remains a quintessential ghost town.

Pithole is the most extreme example of the boom and bust economies that so often mark small and large places alike, especially in our country’s Rust Belt region. Where I live, the boom was oil. In other places, the boom was cars, steel, or (insert your local manufacturing plant here). You get my point.

All across the Rust Belt and much of rural America, work dried up or shipped out, sometimes down South, sometimes overseas. With the notorious exception of cities like Detroit, however, most larger cities were able to reinvent themselves. Places like Pittsburgh found ways to claim the best of their blue-collar heritage while still managing to find their place in the emerging information economy.

The Impact of Boom or Bust on Small Towns

Small towns navigate this new post-industrial world with much more difficulty. Some small towns with exceptional foresight or fortuitous connections to natural beauty, government contracts, or the institutions that still prove lucrative in our economy survive and sometimes even thrive.

Most rural places and small towns, however, are not so fortunate. In these places, the allure of the boom is strong, but the bust is often long. Whether it is the hope of attracting a new manufacturing plant or dreams of Marcellus Shale being found under one’s feet, small towns are often left in the lurch as dreams fade.

For many rural and small towns, these realities are all too familiar. While we may not have many literal ghost towns, we do have towns where long-term economic decline, population loss, and brain drain exert deep influence and lay the groundwork for things like substance abuse, depression, and self-defeating attempts to tap into the boom economy through lottery tickets, casino gambling, or long-shot ambitions of hitting it big in sports or music.

(Finally!) A Place for Small Town Voices and Passion

What does all of this mean for small town and rural church planters? A lot. In the last year or two, major church-planting voices and networks have (finally!) begun to consider the plight of the rural poor and the Church’s near complete failure to launch any kind of sustained church-planting efforts that take small town and rural America seriously.

For better or worse, we have a presidential election to thank for this new awareness of rural matters. It was an election that catered perfectly to the high-hype, boom-time dream that so many in America’s forgotten places feel has eluded them.

I’m not a political scientist, and I won’t speculate on if or when this current political boom will bust. What I do know is that small town church planting must avoid capitulating to a boom-time mentality.

While people—especially young people, many of whom still live in rural areas and small towns—may long for a church plant to fulfill their Internet and mega-ministry-fueled boom-time expectations with better worship bands, hipper pastors, and cooler arts ministries than the tall-steeple churches that dot their town’s corners, rural church planters can’t afford to simply ride on a wave of relevance or boom-time ‘cool factor’ in smaller places.

These approaches are incredibly enticing. In many small places, it does not take a lot to become the hip new church in town. The competition is simply not that steep. As church planters, however, we accept a boom-time mindset, where relationships take back seek to our own ambitions or seemingly neutral terms like ‘production values’ to our own peril and the peril of our congregations and towns. Although it might seem as if people in our towns want a hyped, mega-ministry approach, these efforts are very frequently unsustainable at best and hugely disappointing or harmful at worst.

Small town and rural church planting means representing God and His community in places that have often been burned by short booms and long busts. The history and current reality of many of these places call us as church planters, ministers, and Christians to preach and live a different hope—one that prioritizes relationships over hype, marketing, and quick fixes, a hope founded on the long-term faithfulness of God. In small places, the reality is, faithfulness over the long haul is both difficult and priceless.

Charlie Cotherman is a church planter in Oil City, Pennsylvania. Oil City was once home to the headquarters of Pennzoil and Quaker State. Charlie grew up in a small town and served on staff as a youth and associate pastor in a country church that grew to become a multisite church. He graduated from Pittsburgh Theological Seminary with his MDiv and is finishing his PhD at the University of Virginia. His passion is planting churches equipped and passionate about reaching rural America.

Join the conversation on Facebook
Tags:
None
Posted:
July 4, 2017

Ghost Towns and Small Towns: Church Planting in a Boom and Bust World

Ghost Towns and Small Towns: Church Planting in a ...