If millions of Americans still lived in rural areas, surely God cared about them too.
Charlie Cotherman 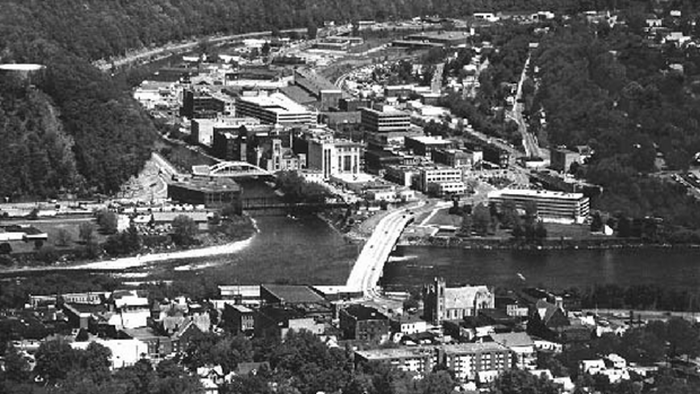 Image: Oil City, PA
Charlie Cotherman was born and raised in rural western Pennsylvania and has almost ten years of ministry experience in a rural context. After spending four years in Charlottesville, VA, he and his wife and their three young children moved back to western Pennsylvania in July 2016 to plant Oil City Vineyard Church.

It’s the phrase we tell ourselves, and maybe a close group of friends, right before we ask the girl of our dreams out on a date. In 2015, the band American Authors capitalized on the cultural ubiquity of the phrase in a catchy song titled…wait for it… “Go Big or Go Home.”

For many young people in rural areas, this phrase also sums up what feels like a virtually indisputable certainty in life. Today, if you happen to have been born and raised away from the fast-growing urban and suburban centers of our country, there is a pervasive sense that to make it big you have to go. If you’re content with smallness (small dreams, a small checking account, small opportunities, etc.), however, you can choose to stay or choose to return home after spending a few years away at college.

I know the power of this line of thinking because I grew up in an area of the rural rust belt where many who can get out do get out, where one grows up hearing adults talk about how few jobs and opportunities exist locally. For people growing up in places like this, there is a sense that a successful future requires a move to the city or the Sunbelt. One either goes big or goes home.

When I thought and prayed about my future, the idea of church planting always came up. I knew of towns close to where I grew up that seemed desperate for a new church plant. But where were the models of inspiring rural and small town church planters?

It was during the three years I commuted from my rural town to a large urban seminary nearly two hours away that the absence of any significant or sustained efforts to plant churches in rural areas really hit me. None of the church planting models I saw during my seminary years—whether at school or on television, the internet, or in popular Christian literature—seemed to care much at all for the rural and small town folks who peopled my childhood memories and made up the vast majority of my friends and relatives.

Church planting was exciting, but it seemed the domain of urban and suburban hipsters.

But as the years went on and I transitioned from seminary to a Ph.D. program in Religious Studies, I couldn’t shake the feeling that, as important as urban and suburban church planting were, there had to be more to the picture.

If millions of Americans still lived in rural areas, surely God cared about them too. A resolve began to well up in me to pursue church planting among the rural poor—people who seemed to be overlooked or forgotten by virtually every large church planting agency. I felt called, but very alone.

In the end I came to find, like the prophet Elijah, that I wasn’t as alone as I thought. There were a few brave and blessed souls who also saw the need presented by rural America (even before the Trump campaign made the urban-rural divide glaringly obvious) and were working to plant churches in these areas. I was ecstatic.

During my initial talk with a leader in the Vineyard USA’s Small Town USA initiative, I realized that, for the first time, someone was speaking my language. I had previously read Francis Schaeffer’s sermon “No Little People, No Little Places” and been moved about God’s concern for small places. Now I had found an organization (and a few friends) who felt the same way.

In July of 2016 my wife and I and our three kids moved from a bustling university town to the rural corner of western PA that we had always called home and planted a church. It’s not big, at least in comparison to the large suburban and urban churches that tower about the landscape of American evangelicalism, but it is what God has called us to for this season. Not everything about the move has been easy, but we have witnessed God’s faithfulness to us time and time again.

I am convinced that God is calling enough church planters to meet the needs of rural areas. Whether or not they are listening remains to be seen. My hope is that a few of them might listen to God’s still small voice as he calls them to look back toward home. I think the church planting world is ready for a generation of young planters who can act in faith and humble confidence on the fact that in God’s eyes, one never has to choose between going big or going home. In terms of kingdom significance, there are truly no small people and no small places.

Are you a rural church planter or pastor looking to network with others and learn best practices? Join us at Amplify 2017 this June 27-29, where we will have an entire track dedicated to rural churches. Register today to reserve your spot!

Join the conversation on Facebook
Tags:
None
Posted:
May 17, 2017