The Roman formula is for the faithful to receive the bread and for the priest to drink the wine.
Brian C. Stiller 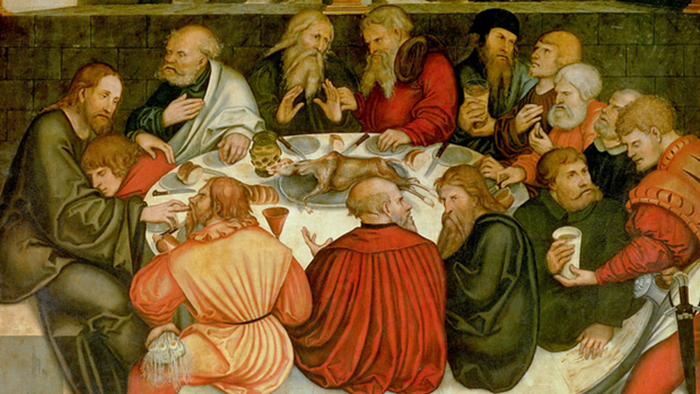 Image: Wikimedia
I am pleased to announce that I am partnering with my friends at the World Evangelical Alliance (WEA) to provide a semi-regular column here on The Exchange in the coming months. Today I welcome Brian C. Stiller, Global Ambassador of the WEA, to the blog.

I sat in the church where Martin Luther preached some 2,000 sermons, imagining the impact his short life had on the world. Sitting in a pew, taking in the sights of The Town Church (Stadtkirche) of Wittenberg, I could almost hear his thunderous insights mixed with stories and applications fitting for his audience in this German town in the early 1500s.

There are many symbols and stories that circulate from that historic and church-erupting time. You may have a point that crystalizes the importance of the Reformation. I have many, but a painting in this Town Church where Luther preached caught my eye and became a riveting symbol summing up for me the rediscovery of the gospel, the great gift of the Reformation.

The church in Rome had been in trouble for over 100 years when Martin Luther pulled the trigger of the Reformation. The toxic brew of multiple issues inevitably boiled over. The papacy was corrupt. Scholarship was declining. Mysticism reared its many heads. New worlds were being discovered. German princes were restless, wanting to manage their own turf. And then a new mind called into question the Church’s control.

In the middle of this political, social, and religious upheaval, Johannes Gutenberg came up with a world-altering invention: a moveable type printing press. Now ideas could be quickly printed and dispersed for people to read and debate.

Luther was not the first to try to reform this corrupt and self-invested Roman church, increasingly under the control of one man. Many had attempted reform a century earlier, such as the Albigenses and the Waldenses. Leaders were killed: John Huss and Girolamo Savonarola were burned at the stake and, while John Wycliffe died of a stroke, decades later the Council of Constance, to make public their condemnation of his Bible translation, had his bones dug up and burned. The Brethren of the Common Life (1350) set about to make their own reforms, with little success.

The influence of the Church engendered deep feelings about the Church’s papal power; confession in which the priest absolved sins; purgatory, midway between earth and heaven; pilgrimages in which people would be assured of heaven by visiting holy sites; worship of saints; and, of course, the selling of indulgences by Pope Leo X to pay for the great new basilica in Rome, St Peter’s.

Buying an indulgence was a way of buying an exemption from being punished for certain kinds of sins. The entrepreneurial skills of these vendors surely outmatch any 21st century television huckster.

Martin Luther was a character—brilliant, pugnacious, and fearless. His years of wrestling with faith were focused when, as a New Testament scholar in Wittenberg, he was caught by St. Paul’s words: For in the gospel a righteousness from God is revealed...‘The righteous will live by faith.’ He later wrote, “Here I felt as if I were entirely born again and had entered paradise itself through gates that had been flung open.”

He had had enough. His subsequent visit to Rome disgusted him. He was especially infuriated by Johann Tetzel who, it was said, used this couplet to sell indulgences: “As soon as a coin in the coffer rings, the soul from purgatory springs.” After return from Rome, Luther wrote his ninety-five points of objections, known as The 95 Theses.

Using the printing press, he had hundreds of copies made, and on All Saints Day (October 31, 1517) he went to The Castle Church, Scholsskirche, and posted a copy on the door where university students would gather. He also had copies distributed throughout the city and across Germany.

This spiritual bomb reverberated across Europe. The story has so many trails I encourage you to read for yourself its impact then and today. There were awful events and inexcusable words in that reforming moment, including anti-Semitism and brutality toward peasants and Mennonites. While rough and inflammatory on both sides of the debate, in the end the Reformation helped break Rome’s hold on the Church as the Reformers preached a gospel that offered the common people a new vision and understanding of scripture.

Its Heart was Theological

Prime theological pivots became leverage for Luther, John Calvin, and others who served in the wake of this mighty revolution:

Made Alive by a Painting

It was here in Wittenberg that Luther set loose the Reformation. The city is well preserved, especially since the fall of the Berlin Wall, for Wittenberg was in the former East Germany under control of the Soviets. The Town Church continues as a preaching post.

I sat toward the back of the quiet church, soaking in its history and imagining the power of Luther’s message to a people wanting a life of faith.

Then, I noticed over the altar a series of paintings. We had learned that Lucas Cranach, a contemporary of Luther, had done hundreds of paintings of that era. Because most people could not read, paintings and sermons became important means by which they could see, hear, and believe.

One couldn’t miss the large central painting, looking like The Last Supper: Jesus with John leaning against him. But I noticed 14, not 13 as would have been with Jesus and the 12. So like other paintings but not quite, with enough difference to tell me Cranach had something else to say.

Luther was clearly in the painting, but turning away from the table, holding a chalice out to a servant standing to his side. And what is this? I wondered. I walked to the front of the church and looked more closely at what Cranach may have been saying. One can’t tell if Luther is giving or receiving the chalice from the servant, and so one can surmise either scenario.

Of course, it was the common cup. The Roman formula is for the faithful to receive the bread and for the priest to drink the wine. But here the wine, the symbol Jesus gave us to remember His death, is not reserved for a few, but is common. It is grace offered to all who by faith receive.

There are many places, artifacts, and symbols pointing out the moment, and binding for us today the power of that moment: the church door of the posted 95 Theses, the preaching church of Luther, his pulpit, the old Bibles of that day, his statue in the square, and the many period paintings.

But the chalice in the hands of a servant brought together for me in one picture, linking the historical moment of Luther and the deeply spiritual truth which gave power and life to the Reformation.

When Jesus lifted the chalice in the Upper Room in Jerusalem and said, “This is the new covenant given in my blood,” it was both symbol and reality merged by faith. The Reformation provided a rediscovery of that gospel. By faith, we drink and remember; by faith, we take hold of his grace, without which we are lost.

Today, we remember. Each of us. It is “The Lord’s Supper.” Not separated by a cleric, ritualized by a formula or experienced only in a cathedral or church building, but at any meal with family or friends. Tonight at dinner, break bread and raise a glass and say together, “Thank you, Lord; we remember.”

Cranach served Luther and Christians through history: the common cup for the common sinner. That’s the gospel Cranach helped me see that day sitting in the preaching church of Martin Luther.

Join the conversation on Facebook
Tags:
None
Posted:
May 18, 2017