Michael Flynn, fake news, and an opportunity to ask why Christians are often the target audience.
Ed Stetzer 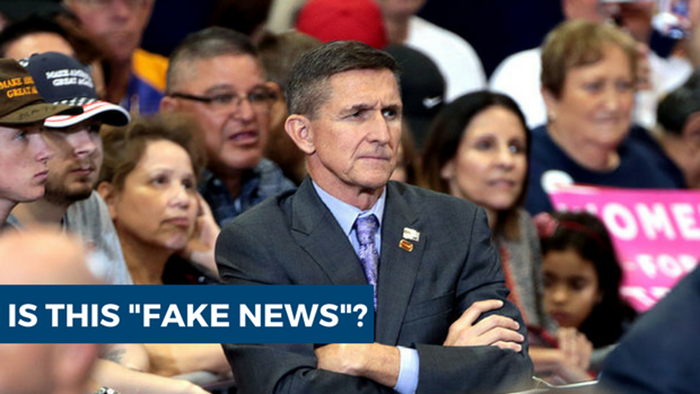 Michael Flynn pled guilty today to lying to the FBI regarding his interactions with the Russian government—and is now cooperating with the investigation. Flynn’s guilty plea is a vindication of those who have objected to the “it’s all fake news” claims.

Mike Flynn just told you this is not fake news.

Now, that does not mean that everything else alleged is true, but it does raise the question again: Why are Christians so often the target audience for fake news?

Let me explain the connection.

In a sad twist of irony, even as we have claimed to be the true ‘discerning ones’ of honest media, some Christians have been quick to fall for genuine fake news. I see, over and over, the Twitter feeds of some Christians crying “fake news!” at every story they don’t like.

And it appears that some—Russians no less—who spread fake news have caught on to the willingness of some of those Christians.

For example, last month, the House Intelligence Committee released a sample of ads Russians used to influence the 2016 election. As Christianity Today reported, among the demographics they targeted were American Christians. Accounts such as “Army of Jesus” regularly posted disturbing images blending spiritual themes and the election.

Or, perhaps consider Project Veritas—which exists to “investigate and expose corruption, dishonesty... in both public and private institutions in order to achieve a more ethical and transparent society.” An undercover Veritas employee was exposed attempting to plant a false sexual assault story against Roy Moore in the Washington Post.

The Veritas story is perhaps the most disturbing as they demonstrated a shocking and unrepentant willingness to cast doubt on victims of sexual assault everywhere for the sake of advancing their mission against news organizations because they see them as fake news.

Yet, for some Christians, this is just more fake news.

The contrast of Project Veritas (which means truth, by the way) against the thorough reporting by the Washington Post in this case is telling. It is an example to believers that, while we may disagree with what some reporters in major media outlets write, the Washington Post employs capable and professional journalists that strive for integrity in their work.

When Christians resort to dismissal of unpleasant truth as “fake news,” we are essentially saying that truth doesn’t matter. We are saying that we prefer the comfort of the lie to a hard truth.

On so many issues, it is time for some Christians to take their fingers out of their ears and stop yelling, “It’s all fake news.”

Some seem to believe that the propagation of false information and the discrediting of all other explanations as “fake news” are essential to the survival of our faith or the support of our side. We need to realize that our faith calls us to no party, media outlet, or political leader, but rather to a God of truth.

This is not new news, but it seems to continually need repeating.

When Christians buy into fake news it does have consequences.

First, we embarasses ourselves.

When we pursue something other than truth—the tall-tales and pernicious falsehoods put forth in these ads, for example—we are rejecting facts in exchange for something fake. Since we serve a God who is both the author and embodiment of truth, the absence of truth from our hearts and minds ultimately leads us away from God’s presence and gives a platform to manipulators and liars.

I’ve called Christians spreading fake news on #PizzaGate & #SethRich to repent. And, some Christians also need to stop pretending news they don’t like is fake. It’s embarrassing to see Christians call truth fake, and spread what is fake as truth.

Second, we hurt our witness.

As news continues to come out on how fake news and ads were used to influence the election, the fact that Christians were successful targets has damaged our credibility.

How can others trust us on the truth of Christ’s redemptive work and the authority of Scripture when we peddle falsehoods? The truth is, the credibility of our witness has been harmed as a result of our gullibility in letting fake news and ads impact us.

It is not enough to be critical. Christians must see the discrepancies in how we are acting and what Scripture calls us to. But there must be more.

Actually, I’d suggest four practices that can help us to be more discerning both in how we consume and how we disseminate the news.

As technology has given rise to faster and faster communication and broadened the spread of news, scholars and theologians have warned of the effect that this lifestyle has had on our thinking. Daniel Kahneman and Alan Jacobs have pointed out that our intuitive thinking (fast thinking) is driven by our biases rather than critical thought.

In contrast, conscious thinking results from us slowing down and carefully weighing out the situation and our response.

It is this second kind that we as Christians need to pursue—the kind that prioritizes truth over speed, edifying the Body of Christ over generating clicks. We’re called to be people with discerning hearts and minds—let’s start allowing this to shape our thoughts and actions.

Our words carry weight in our circles of influence for either the advancement or mockery of the gospel of Jesus Christ. Jesus recognized this when he warned us to be as shrewd as snakes even as we are harmless as doves (Matt. 10:6). As representatives of Jesus, when we are duped and deceived needlessly, we make it easy for others to ridicule the one who sent us.

As his ambassadors, we have a responsibility to know that the information we rebroadcast is true so as not to damage the effectiveness of our Christian witness.

Third, resist the allure of ‘what-about-ism.’

It is perhaps a statement of our political climate that we need the reminder that two wrongs don’t make a right. Yet a common response this article is likely to garner is the defense that the other side is worse.

This is called whataboutism: when faced with some problem we have wittingly or unwittingly caused, rather than own responsibility and change, we point to the other side’s failings as if this should excuse our responsibility.

A major step towards combating this is having the humility to accept where our news consumption habits have erred, knowing that God’s grace will cover us through and through.

These Russian ads were targeted to everyday Christians, and many liked and shared. This gullibility is a pressing problem hurting the church and its witness.

And, the answer is discipleship.

Americans spend more time online and are more reliant on social media for their news than ever before. They need those who shepherd them to help them think more discerningly and biblically.

Our witness depends on it.

Join the conversation on Facebook
Tags:
None
Posted:
December 1, 2017