The Pilgrims did not think of their autumn 1621 celebration as a Thanksgiving Day as much as a kind of harvest festival.
Ed Stetzer 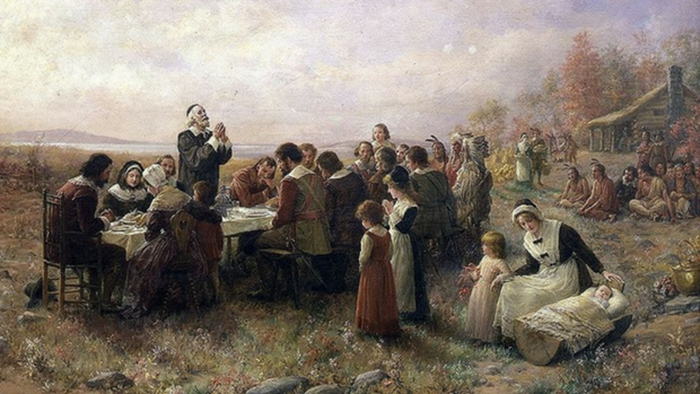 Ed: Several years ago, you wrote a great book called The First Thanksgiving, where you talk about what the Pilgrims were really like, that first Thanksgiving, and what we can learn as Christ-followers. What are 1-2 historical “facts” that you debunked?

Tracy McKenzie: The two most important misconceptions that most of us hold concern (1) how the Pilgrims conceived their 1621 celebration, and (2) what brought them to New England in the first place.

The Pilgrims followed a strict ‘regulative principle’ in their reading of Scripture. They believed that the Roman Catholic Church and, to a lesser extent, the Anglican Church, had added to Scripture by creating ‘holy days’ not commanded in the Bible, and they were determined not to commit the same offense.

They thought of both of these irregular holidays as solemn occasions marked by extensive prayer and worship. Because of the extensive feasting and games that took place, it’s almost certain that the Pilgrims did not think of their autumn 1621 celebration as a Thanksgiving Day as much as a kind of harvest festival. Nor would they have ever approved of regularly scheduling a Thanksgiving Day for the same time each year as Americans have done for the last century and a half.

By their own account, Holland was a place where God had blessed them with “much peace and liberty.” They cited factors other than religious persecution in explaining their decision to seek a new home across the ocean. Boiled down, the Pilgrims had two major complaints about their experience in Holland: they found it a hard place to raise their children and an even harder place to make a living.

Ed: Why does it matter that our understanding of who the Pilgrims were is wrong? What has been the takeaway for you personally?

Tracy: For most of us, I think that rightly understanding why the Pilgrims came to America will make their story more relevant. I think of it in terms of categories that Jesus gives us in the parable of the sower. You remember how the sower casts his seed (the word of God), and it falls on multiple kinds of ground, not all of which prove fruitful. The seed that lands on stony ground sprouts immediately but the plant withers under the heat of the noonday sun. The seed cast among thorns springs up and then is choked by the surrounding weeds.

The former, Jesus explained to his disciples, represents those who receive the word gladly, but stumble “when tribulation or persecution arises for the word’s sake” (Mark 4:17). The latter stands for those who allow the word to be choked by “the cares of this world, the deceitfulness of riches, and the desires for other things” (Mark 4:19).

In emphasizing the Pilgrims’ supposed search for religious freedom, we make the primary menace in their story the heat of persecution. As the Pilgrims saw it, the principal threat that they faced in Holland was not the scorching sun, but strangling thorns.

This hits us where we live. When we hear of the Pilgrims’ resolve in the face of persecution in England, we may nod our heads admiringly and meditate on the courage of their convictions. Perhaps we will even ask ourselves how we would respond if, God forbid, we were to endure the same trial. And yet the danger seems so remote; whatever limitations we may chafe against in the public square, as Christians in the United States we don’t have to worry that the government will send us to prison unless we worship in the church that it chooses.

In contrast, the Pilgrims’ struggle with “thorns” speaks to all of us. As the Pilgrim writers describe them, their hardships in Holland were so ordinary. They worried about their children’s future. They feared the effects of a corrupt and permissive culture. They had a hard time making ends meet. They wondered how they would provide for themselves in old age. Can you relate to any of their worries? I know that I sure can.

Ed: What important role has Christianity played in our country until now, and where do you see it headed in the future?

Tracy: You can’t trick me, Ed! As a historian, I know better than to try to predict the future. Here is a short answer. Although the United States has never been a “Christian nation,” we have historically been a nation with many Christians.

The impact that these men and women have had, however, and how they have understood their proper public role as people of faith, has always varied tremendously. What will this look like in the future?

God knows and I don’t, but I will share this concern: I think the greatest threat facing the church in America today is not the spirit of this secular age, but rather the temptation among conservative Christians to enter into an alliance of convenience with one of the country’s two major political parties. Alexis de Tocqueville had it right: “When religion seeks the support of worldly interests, it becomes almost as fragile as any temporal power.”

Ed: As we celebrate Thanksgiving today, what are practical ways we can all develop a spirit of thankfulness?

Tracy: I think we could learn a lot from the Pilgrims. In their view, an annual Thanksgiving taught human conceit and divine predictability and could easily degenerate into a meaningless ritual that reduced God’s provision for human needs to his creation of the crop cycle. By observing Thanksgiving irregularly, on the other hand—“as occasion shall be offered”—the Pilgrims reminded one another to look with expectancy for God’s ongoing, direct intervention in every aspect of their lives.

I would never suggest that we abandon our current Thanksgiving tradition, but we might follow the Pilgrims’ example by also proclaiming spontaneous ‘local’ Thanksgivings whenever they seem warranted throughout the year. I have in mind worship and praise celebrations in our individual families or churches to acknowledge what the Pilgrims would have called God’s “special providences”—perhaps a new job, deliverance from serious illness, the safe return of a loved one from military service, or the completion of a new church building.

By definition, this could never become a national holiday, but it might grow into a practice that promotes a vibrant awareness of God’s goodness in the way that our current holiday does not.

Tracy McKenzie, Ph.D., is Professor of History and Department Chair at Wheaton College in Wheaton, IL. You can find him writing at faithandamericanhistory.wordpress.com.

Join the conversation on Facebook
Tags:
None
Posted:
November 23, 2017

One-on-One with Tracy McKenzie on the Truth about ...