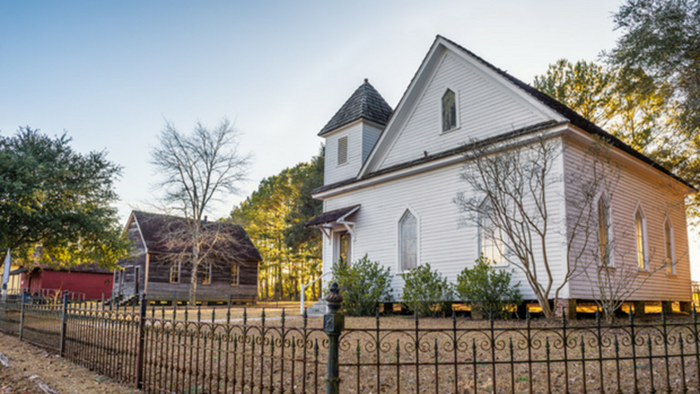 Image: By Nick Fox via shutterstock.com

The accusations against Roy Moore are credible and Moore should step down. If he continues to maintain his innocence, he should still step down so he can fight to clear his name, for the good of his state, for the success of his party, and to end the embarrassment he is causing evangelicals.

Now, what Moore is credibly accused of is horrific. Christians need to avoid even the appearance of ambivalence towards sexual assault and child molestation. The world is watching and the gospel demands us take a stand against such sin and to stand with the victims.

That should be, and has been for me and many others, our primary focus.

Yet, in addition, as an evangelical and a researcher, that damage to evangelical reputation also needs some fair-minded discussion.

Just this past Sunday, Kayla Moore, wife of U.S. Senate candidate Roy Moore, shared a letter on her Facebook page signed by 53 Alabama pastors wishing to pledge their support for his candidacy. In the letter, the signees told of their confidence in Moore’s character—namely, his love of God’s word, care for others, and defender of just causes.

Last night, Sojourners shared an article entitled “More Than 50 Pastors Sign Letter of Support for Roy Moore” and alongside it, they simply tweeted “Forgive us, Lord.”

But why? Why does Sojourners want us to repent?

Since the release of this letter, countless news outlets have jumped at the chance to cast criticism on these pastors. These critiques worsened after a recent Alabama state poll asked evangelicals in Alabama how the recent allegations affect their willingness to vote for Moore in the upcoming election; 37% of evangelicals said they were more likely to support him.

In light of these results, recent article titles have included “Alabama Evangelicals More Likely to Support Roy Moore After Sexual Assault Allegations” in Newsweek and “Roy Moore’s Supporters Stand by Their Candidate, Despite Sexual Assault Allegations” in The New Yorker. All seem to be insinuating the same thing: Christians now prefer Moore as a candidate because of the recent accusations.

So, in other words, the implication is that these pastors (some of whom have now stated that they did not agree to this or any statement after these allegations surfaced) and those responding to a poll are doing so knowing he molested a child, something he denies.

Many are convinced—and now try to convince others—that Christians are somehow not bothered by a politician and U.S. Senate candidate engaging in child molestation.

But is this really the best reading of the situation and the data?

In examining the Democratic reaction to President Clinton’s affair (and long accusations of harassment and more), it is important to recognize that it was not that Democrats liked the notion of sexual indiscretions of their President. Rather, they doubted the accusations (at first), trusted in his denials over his accusers, and resolved to continue their support of him as a leader and party member.

At a more base level, many endured in their support in part due to their belief that a “vast right-wing conspiracy” had come against Bill Clinton. Democrats’ support for Clinton and approval of his leadership was still much higher than both Republican and Independent support even after the news of his involvement with Monica Lewinsky broke loose in the late 1990s.

Were they all supportive of a 49-year-old president’s sexual involvement with his 22-year-old intern? I never assumed so.

However, when people feel someone is unjustly attacked, they double down. This is in part why the biggest scandals in American political history have never been able to substantively kill party loyalty.

If it seems incredulous to you that evangelicals would grow more enthusiastic because of sexual abuse allegations, there is a reason.

Because it genuinely does not make sense.

Occam’s Razor vs. A Hermeneutic of Disgust

At the crux of the matter is that, despite what evangelicals actually believe or what the data indicates, many have already chosen their narrative.

Essentially, there are two competing narratives at play: Occam’s Razor and a Hermeneutic of Disgust.

The best explanation here is that some evangelical Christians are willing to support Moore because of their convictions that the allegations aren’t true. They feel he is being unjustly targeted by the “vast left-wing conspiracy” and they are doubling down on their support.

At the same time, the most satisfying answer to non-evangelicals, former evangelicals, and some self-loathing evangelicals is that they don’t care what he did and they are alright with supporting a child molester; this is the Hermeneutic of Disgust.

Hermeneutics is how we interpret things. And if you are disgusted by evangelicals already, this fits the narrative quite well.

It needs to be said—a host of people are letting their disgust towards evangelicals frame their interpretation of the fallout from allegations against Moore and they are simply treating the information unfairly.

Rather than seeing the most logical (Occam’s Razor), they are drawn to the most disgusting (a hermeneutic of disgust).

Even Nate Silver opined on the interpretation, explaining, “For most voters, “more likely to support after allegations” means “I’m a Moore supporter & don’t believe the allegations” and not “I approve of the conduct the allegations allege.”

It has to be pretty unfair and pretty widespread when Nate Silver notices and comments on the perception of evangelicals.

Real Issues Need to Be Addressed

Frankly, there are plenty of features, habits, and characters within evangelicalism that should give us cause for concern without this narrative. For example, lots of people are discovering a year-old piece of research, saying that evangelicals went from the least to most tolerant on politicians moral indiscretions, and using it in the Roy Moore debacle. It’s not about Moore, but it’s still bad. I wrote about it last year under the title, “Evangelicals: This is What it Looks Like to Sell Your Soul for a Bowl of Trump,” complaining that evangelicals changed their view of the importance of character in order to vote for their candidate—which is pretty much the definition of selling out.

But the fact that a handful of obscure pastors endorsed Moore, and some people in a poll said they were more likely to support him now, simply does not say what some would like it to say about evangelicals. They are not eager to vote for child molesters. They don’t want their 16-year-olds to date 32-year-olds. And all of their pastors are not endorsing controversial figures accused of child molesting.

There is enough for which evangelicals need to repent and work to repair without fabricating new levels of self-loathing. But the response of many people to this data says more about them—and the state of our discourse—than it does about the evangelicals that disgust them.

By the way, Alabama Baptists (the largest evangelical group in the state) met yesterday and passed a resolution condemning racism in quite powerful language. You see, facts are our friends. Even when they are about Alabama evangelicals.

Join the conversation on Facebook
Tags:
None
Posted:
November 15, 2017

Your Disgust for Roy Moore’s Evangelicals May Say ...