As Christians, we can (and should) disagree well.
Ed Stetzer 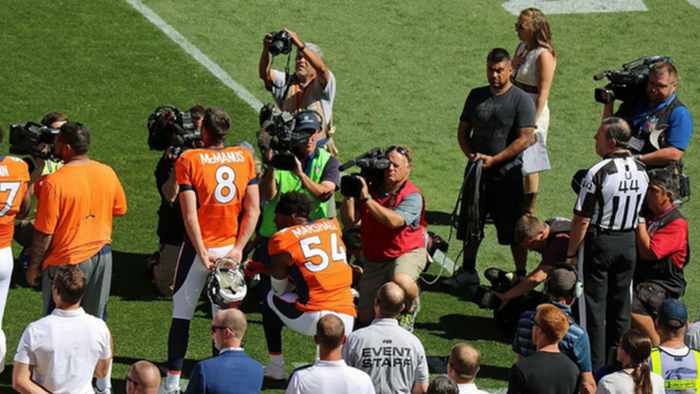 Well, the debate about taking a knee just took an odd turn.

On Sunday, after players at an Indianapolis Colts home game chose to kneel during the national anthem, Vice President Mike Pence decided to walk out of the game. On social media, President Trump signaled that, perhaps, this was a planned walkout designed to rebuke the players for their protest.

And so our country goes further into the rabbit hole of a debate over patriotism.

And we go further down the rabbit hole of missing the whole point of why Colin Kaepernick took a knee in the first place.

I find the vice president’s actions and the president’s tweets to be unhelpful. As two of our highest ranking leaders, their actions and words speak volumes about where their priorities lie. Is this issue about the flag? Or is it about something deeper?

In my initial article I criticized the protests as unhelpful, but that was not my main point.

My focus was that, as Christians, we are going to be on the other side of popular speech and we need to be consistent in our application of this right. We need to “do onto others” by respecting their freedom of speech because this is a right we should value, protect, and rely upon as Christians.

This walkout—in addition to comments by Dallas Cowboy’s owner Jerry Jones about benching players who protested—was not about resolving disagreement. Instead, it was the all-or-nothing approach to conflict that has come to dominate our culture. In a moment when he could have modeled how to disagree well, Vice President Pence chose to use the anthem in his political gamesmanship in a way that belittled the seriousness of the conversation.

And let’s not forget this is a very serious conversation. Men and women have died because of racial tensions.

So I want to revisit this topic one last time to address more substantively the issue of disagreement and how we, both as Christians and fellow Americans, can disagree well. Let me share a few thoughts.

Disagreement, even among Christians, can be good.

In the wake of the Colin Kaepernick piece, I had conversations with African American friends telling me they loved the article, but that I’d missed something in calling the protest “unhelpful.” As one who believes that the church must be on the front lines of racial reconciliation, I asked them to write responses for my blog.

Why? Because even if I disagreed with their argument, their underlying premise that I had missed something about how my words might sound in the African American community was correct.

Far more surprising for me was some of the pushback I got from readers and Christian leaders for the follow-up articles that we ran. While a few challenged their content, most questioned my decision to allow my ‘employees’ to publicly undermine my article.

My first reaction was, admittedly, shock. Open discussion is something I had assumed we should all value. After all, it makes us clearer in what we believe. Iron sharpens iron. The question entered my mind: Where do you work that your employees aren’t allowed to disagree with you on some things?

To be fair, I’ve worked at places where this was the case. At best, this attitude is immature; at worst, it is unfair.

In John Richards’ response to my piece, the issue he looked at was how African Americans have historically used sports as a platform for social protest. These protests were similarly scandalous in former times, but they have since become iconic as major points in American civil rights history. John challenged us to contextualize Kaepernick in the history of civil rights protests in America in order to understand its significance.

Charlie Dates (who is not my employee) shared that it’s not disrespectful to take a knee, but rather is challenging both our country and the church to think seriously about the systemic problems of injustice that diminish those made in the image of God. Charlie challenged us to look past our interpretations of the flag and anthem to interpret the injustice and suffering behind these protests in light of the cross.

In light of these articles, I have been asked repeatedly if I have changed my mind on whether or not these protests are helpful.

The answer is no, I have not—but more on that in a minute. My opinion has not changed, but it has become more informed, particuarly with how other Christians are responding differently. And this is why we have open dialogue.

Disagreement does not have to end in agreement.

As I said before, Kaepernick’s message is important, but I still think his method was unhelpful in that, among other things, it was so easily co-opted. Kaepernick’s point was to draw attention to racial injustice in American society. In this, I agree wholeheartedly and have written extensively on this problem and why evangelicals need to get off the sidelines and into the game on systemic racial injustice in America.

However, what has become clear in the past month—and what was driven home in Sunday’s antics by leaders who should know better—is that debate over these protests has spiraled away from Kaepernick’s objective. Those who point out that the protest has forced us to talk about injustice don’t realize that we’ve been hijacked by discussions of patriotism.

My disappointment with the protests has nothing to do with their content—a message we so need. Instead, I am saddened that they were so easily lent to this kind of co-option.

On this point I agree with President Obama, who recognized the cultural import of the anthem and flag:

I want Mr. Kaepernick and others who are on a knee, I want them to listen to the pain that that may cause somebody who, for example, had a spouse or a child who was killed in combat and why it hurts them to see somebody not standing. But I also want people to think about the pain he may be expressing about somebody who’s lost a loved one that they think was unfairly shot.

We must respect one another’s right to disagree, but through picking symbols with such loaded cultural meaning, these protests have allowed their detractors to redirect the debate into unhelpful areas. We need to care just as much about the method of our protest as the message.

Does this mean that John and Charlie’s articles failed? No. Most disagreements don’t, and shouldn’t, be expected to change minds. Rather, expressing differences of opinion broaden our understanding of the issues, drawing our attention to perspectives that we had not, or could not, have considered on our own.

As recent polling reveals, reactions to these protests and the president’s ensuing rebuke vary significantly across race. These numbers reveal two distinct interpretations of the same event, both laden with the perspectives of community and tradition.

Unfortunately, people frequently boil down disagreement to: you have to agree with me or you are [blank]. Each community fills in that blank with whatever pejorative term applies: racist, unamerican, ignorant, bigoted, elitist, etc. There are times when these viewpoints do get voiced and need to be called out as such. But often, it is not the content of the disagreement that provokes these responses, but the disagreement itself.

Who we are impacts how we see things. Another of my staff, Michael Lee, wrote an excellent piece on understanding worldview and the flag in which he explored how different communities shape the meaning of symbols and how this can lead to conflict between communities over this meaning. So depending upon our background, we come at things from different angles. And these can create misinterpretation at best and broken communities and societies at worst. Our country is an amazing melting pot of cultures and ethnicities. Because of this, we must anticipate worldview clashes. But how will we respond when these arise?

Let’s be willing to embrace disagreement as an opportunity to listen.

Our response to disagreement needs to be to listen and to try to understand those with whom we disagree. There have been times in the past that, through listening, I have changed my mind. However, more frequently, I come to grasp the complexities and nuances of the problem at a much deeper level. My position might not change, but how it is conveyed and defended might change significantly as I incorporate different views into my own perspective.

What I was trying to do in my article was model what it looks like to move past our instinctual desire to reject disagreement and instead to actually listen to one another. As an evangelical leader who speaks predominantly to white evangelicals, I tried to drown out the noise around the protest to listen to what Kaepernick was saying.

What Christians can do, and what is deeply necessary for a civil society, is for us to acknowledge that our community impacts the ways we think and work and to counteract this through patiently trying to understand where others are coming from.

Unfortunately, what we’ve seen in regards to this issue is that our leaders seem willing to embrace an all-or-nothing approach to disagreement. Free speech is cast to the judgment of a few who believe their beliefs are all that really matter.

This should upset all of us.

But let me offer this way forward: Look past the immaturity of doubling down on winning the disagreement and actually try to understand the other side. This doesn’t demand your agreement, but it does demand your time, understanding, and charity.

So if disagreement is an opportunity to listen and understand, we have a great opportunity to turn away from political gamesmanship and instead begin to actually listen.

How can we spend this week listening to the voices of our fellow believers who disagree with us on this subject? How can we honor them as being made in the image of God even when we come with different opinions?

And if you aren’t ready to engage others with differing worldviews, maybe try to redirect your thinking and conversation away from the vice president’s publicity stunt to this story of yet another shooting of a African American, this time in the back.

The weight of so much brokenness in our world demands our attention.

Join the conversation on Facebook
Tags:
None
Posted:
October 10, 2017

Why Can't We Disagree Well? Reflections on Colin ...