People of color need to establish our own conferences, organizations, and networks.
Bryan Loritts 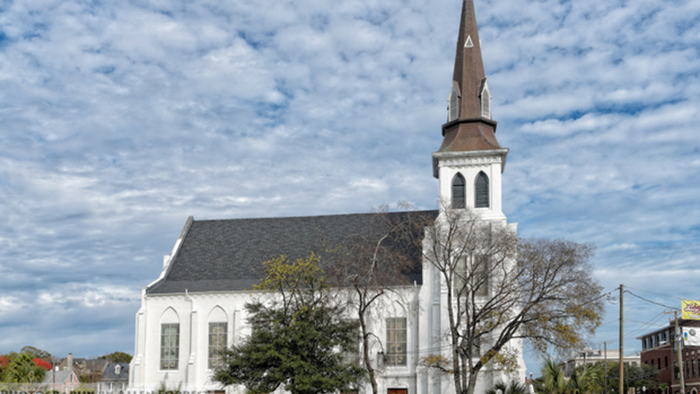 Image: Allen Forrest / Flickr
Mother Emanuel A.M.E. Church, Charleston, South Carolina
Today on The Exchange, Bryan Loritts, Lead Pastor of Abundant Life Church and President of the Kainos Movement, responds to Ray Chang’s article that we ran yesterday. Bryan texted me yesterday and asked me for space to reply, and I was glad to do so. I admire both men and am happy to give them the platform on this important issue.

Bryan and I have walked some of this journey together, and I deeply value his insights. He invited me to his platform, Kainos, to co-facilitate a conversation about race and justice. That broadcast can still be seen here. Now, I’m happy to share some of his thoughts about the recent conversation regarding race and evangelicalism.

Be sure to check out John Piper’s article, to which these respond, before you read Ray’s and Bryan’s. I commend them all to you.

LaVar Ball is onto something. It’s time for Jesus-loving minorities to stop begging for a seat at white folks’ tables. Like the Big Baller Brand, which was founded by basketball players Lonzo, LiAngelo, and LaMelo Ball, we need to establish our own tables. Unlike its loquacious CEO, our tables need to be open and we need to invite our white siblings to sit at them and to be guests in our homes.

Ray Chang’s open letter to John Piper and white evangelicalism is one of the most moving, courageous, and prophetic pieces of prose I’ve read on this subject in some time. His definitions, diagnosis, and insights are spot on. What he has penned is a must read.

My only pushback would be the posture of his letter. I don’t know y’all, but at the age of 44, and having spent over half my life as a guest in the white evangelical world, I’m tired of begging to be noticed, considered, and invited.

I’m tired of begging white evangelical academics to include people of color on their required reading lists.

I’m tired of begging white homiletics professors to lengthen their references of good preachers to preachers of color.

I’m tired of recommending young minority leaders to serve on white church staffs, and watching them get used as tokens to show how “serious” the church is about diversity, only to see it end very badly.

I’m tired of the silence of other minority leaders who, in their pursuit of climbing Mount Significance, are scared to speak the truth for fear of not being invited to some conference, missing out on a book deal, and not having their brand established or extended.

I’m tired of the insensitive comments I’ll get to articles like this from our white friends, not because it’s pushback, but because they have grown up in all white churches that refuse to educate them on biblical, gospel issues like diversity and racial reconciliation.

(Yes, I know to just about every instance above lies outlier examples of that rare exception. But by and large these generalities ring true.)

Being on the ‘Visiting Team’

Have I given up? No. Am I weary? Yes. Edward Gilbreath says in his book Reconciliation Blues that those of us in the work of reconciliation serve as bridges, and it is the nature of bridges to get stepped on. I’ve been stepped on a lot over the years, and so have many others, to the point where there is an army of us who are both deeply committed to genuine reconciliation, but are convinced the historic method of fulfilling our white siblings’ agenda no longer works.

I don’t care how good your team is, when you’re always the visitor playing in someone else’s stadium, your chances of true equality are grossly diminished.

Or to say it another way: When you’re the minority player whose services are contracted by a league whose owners are just about all white, and you speak out for justice, you run the risk of being Kaepernicked.

Every minority in a white evangelical space wrestles with an inner Colin Kaepernick. We see injustice, and want to speak into it, but we know that if we do we can be ostracized, attacked, and the phone will stop ringing as invitations are rescinded or not extended at all. Branded with a scarlet letter. Why? Because the power structures of evangelicalism continue to be white. The overwhelming leadership of higher Christian education is white. So are the professors in that space. Most of the national conferences are lead by whites. I could continue with more, but you get the picture.

We minorities need to establish our own conferences, organizations, and networks. Praise God this is starting to happen, as friends and colleagues of mine—like Dr. Eric Mason and others—are starting to venture out and blaze new paths that contextualize the richness of the gospel in ethnically specific ways. I’ve gone down that road myself with Kainos.

Why is this important? It is impossible to do theology devoid of cultural lenses and expressions. Like an American unaware of their own accent, most whites are unaware of the ethnic theological accent they carry.

My white spiritual siblings tend not to think in terms of whiteness, but all of us do and express theology through our own ethnic and cultural filters. Therefore, it’s impossible for the historic gatekeepers of evangelicalism in America not to color it with their very whiteness. Some of our white friends saw this, and so what happened was the good old college try where our white brothers would invite minorities in for a special event or occasion (i.e. Black History Month, special service), where we’d bring our preacher and choirs and once again be the visiting team in someone else’s house. What fruit did that bare? Not much.

In 1901, Booker T. Washington was invited to the White House by President Theodore Roosevelt and they shared a meal together. While viewed as scandalous to many, there were others who saw the invitation of a black man to dine at the White House as a real sign of progress.

History would have the final say.

While the invitation was extended in the very teeth of Jim Crow, nothing would change until over half a century later. The lesson is painfully clear: minorities serving in white spaces has done little to change the sociological landscape of our country.

God Has No Home Team

It’s no overstatement to say that one of the core issues the first church wrestled with was this idea of whose space is it? We find God screaming through the pages of Acts, “There is no ethnic home team when it comes to Christianity.”

He does this in chapter six when there’s a cultural dispute among widows being overlooked.

He says it louder in Acts 10 as he green lights Peter to eat non-kosher food once banned from his Jewish palate.

And in Acts 15 the first church council is held, where the Jewish leaders of the church—in an astounding move—wrested the hands of Jewishness from Christianity.

These Jewish Jesus-lovers were in tune with their ethnic proclivities and biases. So they determined to not allow ethnicity or culture to be an impediment to Gentiles following Jesus. In each of these instances and more, God is saying there is no ethnic home team or visiting team. It’s time Christians in America live into this.

No, I’m not advocating segregation. But it is time we emancipate Jesus from his white evangelical captivity. To do this, we need to provide a buffet of opportunities, each carrying their unique flavor, but all in the same orthodox line that blesses everyone.

A Word on White Idolization

But a final word also needs to be said to my minority colleagues engaged in the work of the gospel. We must beware the subtle expressions of white idolization. White idolization happens when their approval of us is sought more than the approval of God (1 Cor. 4:1-5; Gal. 1:10).

When I am disproportionately devastated because Tim Keller didn’t endorse my book, or John Piper didn’t invite me to speak at his conference…when my effectiveness as a minister is gauged on whether or not I speak at those events or get noticed by them, I have not only fallen into sin but, unbeknownst to them, I am facilitating and empowering white oppression. Yes, say this to yourself, “I do not need the validation of D.A. Carson or Mark Dever.”

Some of what we blame on white folks has more to do with us than with them. You have one heavenly daddy, and he ain’t them, nor is he white.

So thank you, brother Ray, for your article.

But we’ve been asking too long. It’s time to put an end to evangelical gentrification, where the presence and ownership of white Christians makes it more valuable in the eyes of many. Yes, some will be called to work on white staffs and in white spaces. This is honoring to God. But others of us are tired of being tenants in the things they own, so there is a real move among some of us as minorities to ‘own’ our own organizations and events, and invite our white siblings over for a change.

There’s room in the kingdom for both.

Join the conversation on Facebook
Tags:
None
Posted:
October 20, 2017