Although Lewis was not always comfortable in the role of an evangelist, he was true to this task and regarded it as a necessary one.
Jerry Root 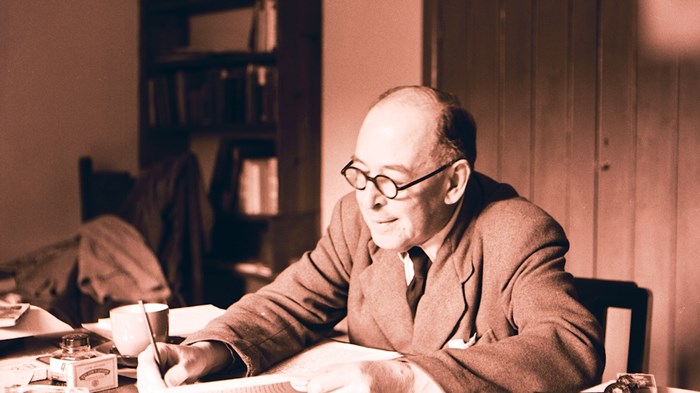 C. S. Lewis denied he was a theologian but he did declare “I am a rhetor.”[1]

Since all rhetoric is persuasive—whether it be a request for someone to pass the salt or a shouted warning to flee a burning building—it is safe to say that through the spoken word as well as the written word Lewis sought to persuade.

However, his methods were not manipulative. He was committed to objective value, seeking to follow the truth where ever it led. He was a truth seeker and attempted to be a truth teller. This was true of Lewis as a rhetor and no less true of him as an evangelist.

Lewis wanted to point people to God. Although he was not always comfortable in the role of an evangelist, he was true to this task and regarded it as a necessary one.

That is, he sought to persuade others to accept the message of the Christian gospel—or good news—that God was in Christ reconciling the world to himself (2 Cor. 5:19).

One need not survey for long the over 70 titles that bear his name to discover his evangelistic passion. He wrote letters explaining, “…it is our duty to do all we can to convert unbelievers.”[2] He declared this in his essays, “To convert one’s adult neighbour and one’s adolescent neighbour (just free from school) is the practical thing.”[3]

He added, with a sense of urgency, “If you make the adults of today Christian, the children of tomorrow will receive a Christian education. What a society has, that, be sure and nothing else, it will hand on to its young.”[4]

Furthermore, Lewis wrote that, “He who converts his neighbor has performed the most practical Christian-political act of all.”[5]

One can do all in his or her power to change society and transform social institutions but, until individual hearts are transformed the society will remain the same. Lewis believed this and, therefore, evangelism was as important to his own spiritual disciplines as daily prayer, Bible study, church attendance, and sacrificial giving to meet the needs of others.

Lewis engaged in a wide range of evangelistic practices. He was foremost of all a literary historian. His gifts were honed and practiced into a skill. As a Christian, he harnessed these gifts as both a writer and communicator, all for the Kingdom of God and the benefit of others.

In fact, Lewis once wrote, “Most of my books are evangelistic.”[6] This may not have been explicitly so, but as Lewis himself observed, “What we want is not more little books about Christianity, but more books by Christians on other subjects—with their Christianity latent.”[7]

Once Lewis converted to Christianity, his faith informed virtually all he wrote after that. He lived a faith-integrated life. It is undeniable that as a writer he was evangelistic.

The Strand of Evangelism in Lewis’ Writings

In what way were his books evangelistic? Let me share three of the many ways Lewis’ books are evangelistic.

First, Lewis busied himself with preparing people to receive the gospel message. Lewis wrote a letter, explaining his purpose for the broadcasts talks, which eventually became Mere Christianity. Of these radio addresses he wrote,

Mine are praeparatio evangelica rather than evangelism, an attempt to convince people that there is a moral law, that we disobey it, and that the existence of a Lawgiver is at least very probable and also (unless you add the Christian doctrine of the Atonement) that this imports despair rather than comfort.[8]

Lewis believed the universe was a moral one, and all were guilty of the failure to live up to the moral expectation. Such failure placed everyone in a precarious situation. This was not the gospel but it did much to make one’s heart ready for the hearing of the good news of forgiveness of sins.

Second, Lewis’ evangelistic rhetoric was explicitly Christ centered. While Mere Christianity began with a moral argument for God’s existence it develops into an explicit effort to point people to the uniqueness of Christ.

This was particularly noted when Lewis directs attention to the claims of Christ. Jesus claimed to be God. He claimed to have the power to forgive sins. These are either the words of a madman, or a manipulator, or they were the words of truth.

In pointing people to attend to the words and works of Christ, Lewis’ evangelism was explicitly Christocentric. In this regard, Lewis is unapologetic about the narrowness of Christ’s claim to be the only way to God. Truth by its very nature is narrow. Pascal wrote that the very nature of truth suggested its narrowness for the slightest deviation from truth and one drifts into falsehood.

One may not like the narrowness of Christ’s claims; one may even disagree with them. But no one who understands the nature of truth can dismiss these claims by virtue of their narrowness. Lewis is unequivocal that it is only through Christ one can begin a relationship with God.

A third facet of Lewis’s evangelistic rhetoric evident in his books is his use of the imagination. He was not only able to prepare minds for the gospel with his apologetics, but he was also able to warm the heart to receive the message by virtue of his ability to craft metaphors and create images. These imaginative depictions made it possible for his readers to see with their imaginations what might have otherwise remained opaque to the reason.

In this way, Lewis’ evangelistic rhetoric won many hearts and persuaded those who were otherwise closed to the gospel. His presentations are clearly reasoned; and his use of the imagination gives him a fair hearing; often, even among skeptics.

All Christians committed to the mission of the church would do well to learn from these three facets of evangelism modeled for them in Lewis’ books. Sometimes, the work of an evangelist is the work of preparation. Lewis’ work also reminds the evangelist to remain Christ centered. He stuck to essentials whenever he proclaimed the gospel.

His name will always be synonymous with Mere Christianity. Furthermore, Lewis’ model highlights the use of the imagination as a valuable tool for the evangelist’s tool box. It is worth the effort to develop skills of depiction in order to clarify for others what has been done for them in Christ.

Want to learn more about the intersection of C.S. Lewis and evangelism? Join Dr. Jerry Root for the C.S. Lewis/Cultural Engagement Seminar: Connecting the Gospel to the World from July 9-13 at Wheaton College. There is a cost, but all are welcome!