The essence of evangelism is the gospel message—true for all peoples, all places, and all times.
Ed Stetzer 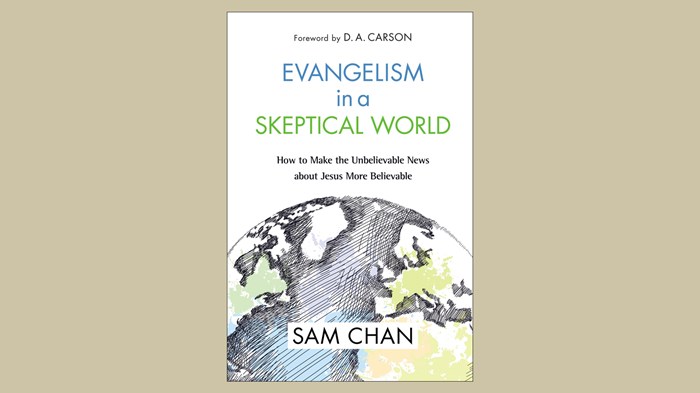 Sam Chan, a practicing medical doctor and a public evangelist with City Bible Forum in Sydney, Australia, recently wrote Evangelism in a Skeptical World: How to Make the Unbelievable News about Jesus More Believable. Below, I talk with him about his new resource.

Ed: Why a book on evangelism?

Sam: Deep down, every Christian wants to tell his or her friends about Jesus. But we also know just how unbelievable the gospel—about a man called Jesus, who is both God and human, who died and rose again 2000 years ago—can often appear.

And we know that our world has changed so much in the last 10-20 years. Our world is so post-Christian, post-churched, and post-reached, that widely accepted methods of evangelism, though once effective, don’t seem to work so well anymore.

As a result, Christians are caught in a hard place. We feel guilty for not telling our friends about Jesus. But at the same time, we feel helpless to do anything about it.

Well-meaning Christian leaders might say to us, “Simply tell your friends about Jesus. Just do it!” But we know that it’s not as simple as that.

Ed: How does this book tackle the task of evangelism?

Sam: I figured that we are now so post-Christian, post-churched, and post-reached that we may as well treat our world as unreached. We’ve turned the full circle!

I wondered how missionaries would bring the gospel to our 21st-century Western world. So I borrowed from what I learnt in my missiology classes—contextualization, cultural analysis, storytelling—and applied it to evangelism in our contemporary world. And voila, out popped this book called Evangelism to a Skeptical World!

Ed: So what are some of the secrets to evangelism in today’s 21st-century West?

Sam: There are so many. You’ll have to read the book! But I’ll share three quick insights:

First, people believe what their friends believe. Part of the problem now is that most of our non-Christian friends have no Christian friends—except for us. I love reading the New York Times—but apparently none of the staff on the NYT know any Christians!

That means that evangelism is not an individual task. We need to do it as communities. And we need to make it a lifestyle change. It’s not an event or task that we add to our life. Evangelism is something our life becomes, rather than something that we do. This is what Paul talks about when he says to the Thessalonians, “You know how we [plural!] lived among you” (1 Thess. 1:5). Notice it’s Paul, not as individual, but as a community; and it was a lifestyle as well as an activity.

Second, we need to discover creative ways to show hospitality. I had never noticed roof racks until now. Growing up as an Asian kid, Asian parents don’t have roof racks—they don’t surf or go camping! But now that I’ve bought roof racks for myself, I notice that they are everywhere.

It’s the same with hospitality. The idea, and word for hospitality, is everywhere in the New Testament. We’ve concentrated for a long time on word gifts, such as teaching and evangelism, but we’ve neglected hospitality, which provides the space for evangelism to happen.

Jesus was always eating and drinking with tax collectors and sinners. And it’s time that we opened up our homes to our non-Christian friends. If we eat and drink with them, we provide the private and safe spaces where conversations about values and worldviews will eventually occur.

Third, we need to explore other biblical metaphors for sin and salvation. For example, our postmodern non-Christian friends no longer believe in absolutes. For them, laws are artificial constructs imposed upon them by authority figures.

If we use our traditional metaphors of rebellion and forgiveness, that just sounds like we are playing a power game upon them, and threatening to take them back to the dark ages. Back to a time, when governments and religious institutions told us what to believe, before the Enlightenment set us free to think for ourselves.

Rebellion and forgiveness are biblical metaphors. But they might not be the most strategic places to start now. So I’ve started exploring other metaphors, such as shame and honour. For example, if I speak at a High School campus and tell them that they have disobeyed God’s laws and that they need to ask for forgiveness, they just roll their eyes and think, “Here we go again.”

But if I say to them, “There’s a God who loves you and made you, and he has given us good things to enjoy, but we don’t worship him. We don’t honour God the way we should. We have shamed him.”

Suddenly they get it. Somehow shame and honour have traction in our postmodern world. This is something that non-Christian authors, such as Jon Ronson in his book So You’ve Been Publicly Shamed, are also recognizing.

Ed: If there’s one take home message on evangelism, what is it?

Sam: The essence of evangelism is the gospel message—true for all peoples, all places, and all times. But we’re also free to explore a variety of methods and metaphors. The aim is to be both true to the gospel but also meet our friends where they’re at—culturally, emotionally, and existentially.

Join the conversation on Facebook
Tags:
None
Posted:
April 24, 2018