Three Lessons We Can Learn from the Brave Life (and Quiet Faith) of Sen. John McCain

You would be hard pressed not to find something truly admirable in this man who served so faithfully.
Ed Stetzer and Laurie Nichols 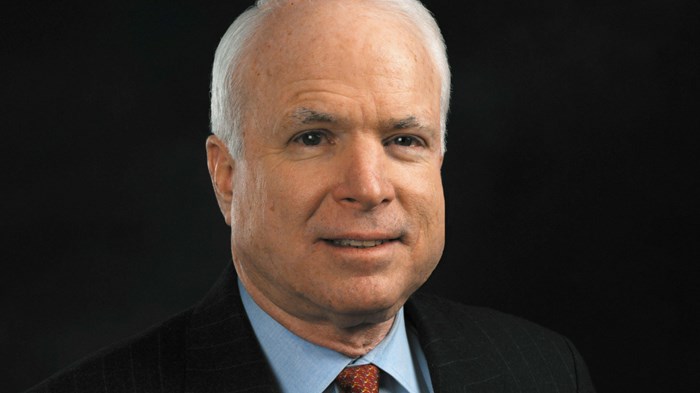 It was only Friday that the family of Senator John McCain announced that he was ceasing treatment for an aggressive form of brain cancer. Today, this American hero is dead at the age of 81.

Regardless of your views of his politics, you would be hard pressed not to find something truly admirable in this man who served faithfully, and with conviction, in American politics for more than 40 years. Today’s CNN article said it this way:

McCain, who has died at the age of 81, was a naval bomber pilot, prisoner of war, conservative maverick, giant of the Senate, twice-defeated presidential candidate and an abrasive American hero with a twinkle in his eye.

Since so many can talk about his courage and his views, I thought I’d take a different approach.

McCain did not talk a lot about his faith, but he was a believer. He held to his convictions and his understanding of the humanity of all in good times and bad. And, he sought to live his life with passion and urgency as he fought for the good of others.

You can read about his accomplishments in news outlets around the world, but as I consider his life, I am struck by some personal lessons that I—and I believe all of us—can learn as we seek to live our own lives with passion and urgency.

According to the CNN article, in a recent memoir, McCain said this about the way he lived his life:

It's been quite a ride. I've known great passions, seen amazing wonders, fought in a war, and helped make peace. I've lived very well and I've been deprived of all comforts. I've been as lonely as a person can be and I've enjoyed the company of heroes. I've suffered the deepest despair and experienced the highest exultation. I made a small place for myself in the story of America and the history of my times.

Let me share just a few thoughts of what I’ve learned as I think on his life and journey.

First, going through difficult times can make us stronger.

As a prisoner of war for five and a half years, he saw much. I am reminded of Philippians 4:12-13:

McCain was a man of faith and talked about his faith when he had little, and quietly practiced when he had much. He has been attending North Phoenix Baptist Church for years. His experiences might have pushed him away from God, but he quietly engaged there at the church. When Rick Warren asked what being a Christian meant to Senator McCain, he replied, “It means I’m saved and forgiven.”

In a Baptist News article, the former pastor of North Phoenix explained,

“His personal history means he's not going to use ‘the language of Zion'” to talk about his faith, Yeary said, referring to the biblical terminology typical of evangelicals. But, he noted, “a great understanding” of McCain's religious beliefs can come from reading the candidate's autobiography, Faith of My Fathers.

Cindy McCain... was baptized at the Phoenix church in 1991, two years before Yeary became pastor...

In an interview last year with InsideCatholic.com, an on-line Catholic forum, McCain said he attends North Phoenix Baptist because he likes Yeary's “message of reconciliation and redemption, which I'm a great believer in.” He added: “… I'm grateful for the spiritual advice and counsel that I continue to get from Pastor Dan Yeary.”

McCain took the hard seasons of life—his imprisonment, his health challenges, his failed presidential campaigns, and more—to draw strength from his faith and to press forward.

My takeaway: When all seems dark, there is light just around the corner when we stick close to Jesus.

Second, staying the course produces an integrity worth replicating.

Many (more than half the country, actually) disagreed with McCain politically. Many have critiqued his stances and vehement objections to many on the left (and sometimes even on the right). Yet one thing is clear: Despite differences in opinion, he was deeply admired. We see that through the tributes that are flooding in.

But, again, you can read more about that elsewhere. I also noticed those who admired him for his quiet faith. One woman posted on my Facebook page this:

I had the privilege of being in the same Bible study (Sunday school) class with he and Cindy when they were home. In his later years, I have disagreed with much of his politics, but I always admired him for speaking his mind, and not being swayed just because some disagreed with him. I have no doubt about his relationship with the Lord…

When we hold fast to the biblical commands and our call to love God and love others, we shine like cities on a hill (read Matthew 5:14), and attract others by our actions. One would be hard pressed to find hypocrisy in the way McCain lived and the words he spoke. His commitment to American values and the opportunities and freedoms all should be offered is unheard of in today’s political climate.

My takeaway: When we believe in something good so deeply, we will seek to be people who live and speak in such a way that others will be changed as a result.

Finally, the image of God is in each person, and worth fighting for.

To some, McCain was not bi-partisan enough. He didn’t do enough to stop Trump or to oppose Republicans in Congress. To others, he was not conservative enough.

McCain might have lost the 2008 election, but over the course of his career, both in the military and in politics, he won me over by embodying many of the ideals that we should aspire to as citizens—courage, compassion, and honesty.

But beyond these and ultimately why I have and continue to admire him is that he refused to see those who he disagreed with as his political or cultural enemies. He showed that even in the midst of intensifying polarization, you can resist the allure of tribalism.

One of the most powerful moments of that displayed that was when he refused to take the bait from a woman (incorrectly) implying President Obama was a Muslim.

When we begin to think we are better than others, our witness is corrupted and Christ is dishonored. The image of God in all is something worth fighting for, daily.

My takeaway: When we begin to see others not as the enemy, but as people, our every thought and word is altered.

So what will we now do?

As a man of faith, McCain served as an example of what it means to have your faith lived out in all parts of life, in each moment of life. I reached out to the current pastor of North Phoenix Baptist Church, Noe Garcia. We talked on the phone tonight about how we both admired Senator McCain.

Pastor Noe said this as he reflected on McCain:

Senator McCain was a man of courage and faith and he loved his family. He and his wife Cindy have been part of the North Phoenix community for many years and we are committed to ministering and praying for them during this difficult time.

I’m thankful for the heroism and example of Senator McCain. Today, I pray for his family. I also pray that his courage and concern for others might be an example to me and to many.

Laurie Nichols is Director of Communications and Marketing for the Billy Graham Center at Wheaton College and visionary and creator of the Gospel Life line of resources and the Our Gospel Story curriculum. Laurie is involved in anti-exploitation efforts when she is not spending time with her husband and two kids.

Three Lessons We Can Learn from the Brave Life (and Quiet Faith) of Sen. John McCain

Three Lessons We Can Learn from the Brave Life ...