Vietnamese Christians have a unique understanding of their world and courage to do what needs doing.
Brian C. Stiller 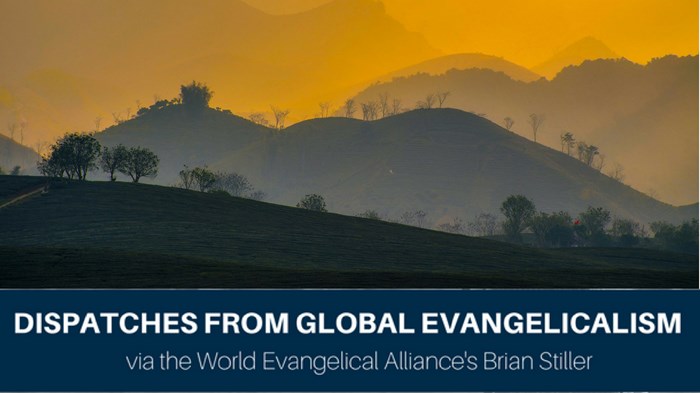 Aromas from open kitchens scent the night air as I walk the narrow streets of old Hanoi. It’s time for evening dinner: Sidewalk restaurants filled with children and adults spill out their happy chatter, all busy with eating in one of my favorite places in the world.

Anthony Bourdain, the recently deceased gourmet globe trotter for CNN, named Vietnam as among his most loved countries: “The food, culture, landscape and smells—they’re all inseparable.” In his 2016 series the camera catches him on a low seat in a noodle restaurant, just off the street, not only inquiring about spices and noodles, but life. His pictures crossed my mind as I strolled that evening.

Vietnam also carries with it other memories: bombers dropping their destructive ordnances on unsuspecting villagers and soldiers creeping through jungles. Those wasted years are powerfully captured by Ken Burns and Lynn Novick in their recent 10-part series chronicling the Vietnam War.

Their pictures and interviews remind us of a fiercely patriotic Vietnamese people who faced down the impositions of France and the USA, whose involvement was fueled by the West’s belief in the “domino theory,” a view that posited that if Communism took over Vietnam, Laos, Cambodia, then Myanmar and Thailand would fall, followed by the rest of southeast Asia.

Five borders frame my understanding of the evangelical church in Vietnam.

Post French and USA occupation, Vietnam still is “north” and “south,” separate parts of the whole, each holding onto distinctive factors not unlike other countries: Different accents, dialects, and regional uniqueness.

The 1954 Geneva Accords between the French and the Vietnamese allowed migration between north and south. Thousands of Christians, especially Catholics, took the opportunity and fled into the south, fearing rightly that the north would suppress faith. A decade later, the Americans stepped in and attempted to keep the Communist faction of Ho Chi Minh in the north and promote a democratic nation in the south. This geographic division finds its way today into the evangelical church.

The evangelical church was planted 100 years ago

In the early 1900s, the Christian and Missionary Alliance (C&MA) planted churches, trained pastors, translated the Bible, and raised up indigenous leaders—all essential factors in rooting the gospel in a world where it survived through Communist rule and civil war and today thrives.

The evangelical (or Protestant) church is dominated by the Evangelical Church of Vietnam (ECVN), often referred to as the C&MA. Of the 1.7 million evangelicals, one million are members of the ECVN. Yet there is a clear division of regions within the body between north and south. They both have their own respective denominations and leadership, and while of common origin, each has its own ways and views.

In 1988, an outpouring of Spirit-led revival changed the face of evangelicalism. This spiritual renaissance created fractures, especially in the south. Not unlike what happened elsewhere in church communities when a Pentecostal-style renewal broke out, division and misunderstanding were created.

Today, house churches are grouped under various denominational and independent forms. Their distance from the main church body—the ECVN—is clearly more pronounced in the south.

Jesus among the Hmong

A people living in the Northwestern Highlands, the ethnic Hmong numbering one million, were remarkably introduced to the gospel by radio in the late 1980s. Today, 40 percent are Christian. Seb Rumsby writing in The Diplomat points out,

Surprisingly, no foreign missionaries were physically present in Vietnam’s highlands when Christianity started to spread in the late 1980s. Instead, villagers stumbled across a Hmong-language evangelistic radio program broadcast from Manila. Thrilled by hearing their own language on air, Hmong listeners told neighbors and relatives to tune in as the message spread like wildfire.

The Hmong are part of a large ethnic grouping of several million straddling the borders of China, Vietnam, Laos, Thailand, and Myanmar.

Persecution comes in different forms: Official harassment, shutting down churches, restrictions of pastoral training, imprisonment, the loss of life, and social pressure by family and community.

Communist Vietnam remains burdened by an ideology which requires the state to carefully watch and manage religion. A long series of decrees on religion were for the first time this year combined and elevated to the level of law.

In January 2018, the Law on Belief and Religion was passed by the National Assembly and took effect. Some religious leaders argue that it is more intrusive and controlling even than previous decrees. One critic observed that a modest-sized church would need a full-time compliance secretary to abide by the new 30-page law. An accompanying implementing decree provides 53 separate forms for asking for various permissions.

The Interfaith Council of Vietnam, made up of 27 council members from Buddhist, Cao Dai, Christian, and Hoa Hoa communities noted, "As spiritual leaders struggling for religions' independence and the people's human and civil rights, we completely reject the draft law that the communist government is using the National Assembly to approve and impose."

There has especially been government reaction to the growth of the church among the Hmong. Authorities harass and publish literature decrying them, with such activities often more prominent in rural areas. Evident concern is that as the church grows in countries such as China, the political fear is over right of assembly, as churches represent a well-organized, growing demography with a radically different and threatening worldview.

The resilience of the churches

Within a bruised country full of scarred people is a resilient church. Buffeted by government policy, the church is affected, not surprisingly, having lived for decades within a culture that has bred mistrust, fear, and intrigue.

Even so, stories abound of courage and Spirit-driven boldness. Reg Reimer tells us of Rev. Dang Van Sung and his wife, Mrs. Diep Thi Do. In 1953, they went to work with the Stieng minority tribe in Binh Phuoc province. Just before Communist forces captured the area in April 1975, he was taken prisoner and never heard from again.

For six years, Mrs. Diep went into hiding, unable and afraid to contact any local Christians. Eventually she surfaced, and one day while in the market she met a group of Christians. Recognizing her, they pled with her to become their pastor.

She did more than that. Battling the government, she pressed the Communist state to open closed churches. In time, they agreed. In Phuc Long, she built a church seating 2,000, the largest church building in the country at the time. When she died, she was overseeing the construction of a three-story school building. At her funeral, 4,000 people showed up, a manifest applause for a woman of faith, widow, pastor, and builder who called herself “only a little woman.”

There are many parallels between Vietnam and the early church: Persecution mixed with the miraculous, courage alongside martyrdom, preaching of the gospel sidetracked by contrarian personalities, huddled believers in hidden churches, yet in other places, large public celebratory events. Some church leaders oppose unity yet are overshadowed by others who, with a wider and more inclusive vision of Christ’s kingdom, invite unity.

Yes, Vietnamese food is among the best, but my takeaway this time are lessons in what it takes to live out the gospel. Not unlike the sons of Issachar, the Vietnamese Christians have a unique understanding of their world with courage to do what needs doing (1 Chron. 12:32).

Brian Stiller, son of a preacher, is global ambassador for the World Evangelical Alliance. He served as president of Tyndale University College & Seminary in Toronto. His latest book is From Jerusalem to Timbuktu: A World Tour of the Spread of Christianity.

Vietnam: A Land of Great Food, but Extraordinary ...