Apostle Paul was able to gather multiethnic audiences because he knew how the various people who gathered would hear what was being said.
Brian Loritts 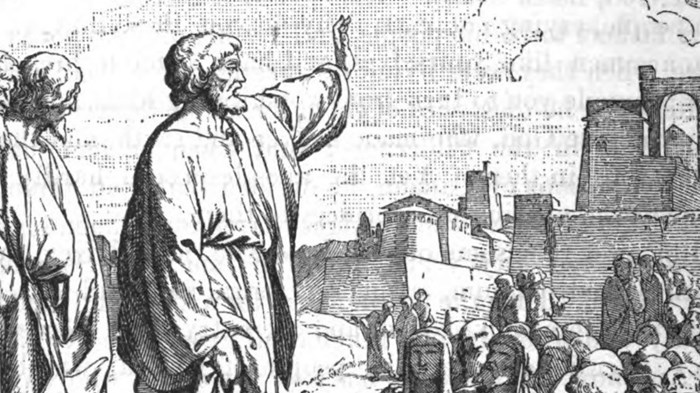 Although it has been a number of months, we continue in our series on biblical preaching (in partnership with The Gospel Project). We have asked some teachers, preachers, and scholars to consider preaching, interact with it, and contrast some different approaches.

Today, we welcome Pastor Bryan Loritts. Bryan serves Lead Pastor at the Abundant Life Christian Fellowship of Silicon Valley, California. He is an award-winning author of six books, including his newest release Insider Outsider. Heco-founded Fellowship Memphis in 2003, and later founded The Kainos Movement, an organization committed to seeing the multi-ethnic church become the new normal in our world.

Ray Charles was music’s triathlete. If Ray played baseball, he’d be your consummate utility player. From gospel to R&B and even country, Ray Charles defied labels. In fact, it was his unique ability to sing so many different genres that made his concerts so multiethnic. Whatever you needed Ray to be he was, without losing his unique self in the process.

The Apostle Paul was to preaching what Ray Charles was to music. Paul could walk into any synagogue, unfold the scroll, and preach the glorious gospel of Jesus Christ to Jews with such effectiveness that they were moved to either salvation or riots.

Moments later, Paul could be found in a Gentile environment like Mars Hill, quoting from their own poets, and using their own altars to make what Charles Spurgeon called his “bee-line to the cross.” I’ve often coveted this aspect of Paul’s ministry, pleading with God to allow me to preach a gospel big enough for First Presbyterian and First AME.

What was birthed out of Paul’s “Crossover Preaching” (to quote my friend Jared Alcantara), was the multiethnic church. That’s right, most of the churches Paul planted were multiethnic.

I write these words as a black man who is indebted deeply to Dr. Martin Luther King, Jr. and the leaders of the civil rights movement. Because of their sacrifice I am able to sit on any seat of the bus I like, sleep in any hotel and send my children to integrated public schools.

Our forty-fourth president, Barack Obama, does not ascend to the highest office in the land without the army of those who endured biting dogs, billy clubs, and bombings in faraway places like Birmingham and Selma, Alabama. I am beyond grateful.

And yet the great insufficiency of the civil rights movement is while they could change laws, they could never change hearts. That is beyond the pay grade of any human, and belongs solely to the work of the Holy Spirit, pulsating through the ministry of another institution God has ordained—the local church.

If we have any hope of advancing the trail blazed by Jesus and furthered by the many pastors and Christian leaders of the civil rights movement, there must be a robust commitment to the multiethnic church.

These are divided times, the most divisive of my life. Black bodies riddled with bullets from police officers, the brown bodies of young immigrant boys and girls trapped in cages and segregated from their parents to the exploitation of women at the hands of powerful men, calls for the emergence of the true local church where insiders and outsiders, powerful with powerless, raise hands across the ethnic and sociological divide in praise to our glorious King.

Yet we have no hope of constructing what Dr. Scot McKnight calls “The Fellowship of Differents” without our pulpits being stocked with homiletical Ray Charles’— people whose preaching continues the lineage of Paul and is able to stretch across the divide.

This is our kairotic moment.

Unfortunately, too many of our preachers are like the African American country music singer Darius Rucker—amazingly talented and tragically marginalized. We need preachers who can do more than proclaim “country,” or just “R&B.” We need preachers whose hermeneutics and homiletics transgress ethnic and sociological boundaries.

It was Dr. Matthew Kim who said preachers with cultural intelligence understand three things well: hermeneutics, homiletics and humans (Preaching with Cultural Intelligence, page xiv). Paul was able to gather multiethnic audiences because he not only understood the Bible, and communicated effectively, but he also knew how the various people who gathered would hear what was being said.

We catch a glimpse of this in I Corinthians 9:19-23. Here is Paul pulling us into his friendships. Just a cursory glance at this text reveals the eclectic nature of Paul’s relationships. Here was a man who had Jewish and Gentile friends (among others). Diversity would be an apt moniker of Paul’s tribe, and yet it was not a diversity dipped in the modern ilk of liberalism.

No, Paul’s was a Christ-exalting diversity, birthed out of a deep and driving commitment to the gospel. After perusing the eclectic nature of his relationships, Paul concludes he does all of this not for popularity, but for the sake of the gospel (1 Cor. 9:23). Scan the shout-outs Paul gives at the end of his letters and what do we find? A list of diverse people. Or revisit why Paul gets thrown in jail for the final time. He’s falsely accused of taking his Greek friend Trophimus into the forbidden parts of the temple. Paul had deep Gentile and multiethnic friendships.

It’s here where our seminaries and preaching classes prove woefully inadequate, for Paul disrobes a powerful force in preaching the eclectic gospel—relationships with what Dr. King called “the other.”

To have the three-legged preaching stool of hermeneutics, homiletics and humans requires that I understand not just humans, but humans who do not look like, act like, think like or vote like me. But this understanding is only forged out of hours of dinners, trips and coffees. We will never preach in the lineage of Paul without pulling up a seat at the eclectic table of koinonia. I cannot effectively reach people I do not know.

It was Karl Barth who once responded to a question concerning his philosophy of preaching by exclaiming he takes his Bible in one hand and the newspaper in the other. Great preaching connects the streets of Jerusalem to Chicago. Effective preaching is concentrated on how does the timeless truth of a given pericope come to bear on people living in a given locale at a particular time.

This demands a prophetic courage where we speak into issues of immigration, systemic racism and misogyny (among others). And while the focus of this article is not concerned with justice, we must entertain the question of how would an eclectic community hear a message calling them to stand up for the marginalized and oppressed?

When a Ferguson happens, as a black preacher I know how many blacks feel, for we are a people who stand in solidarity with one another, tied with the chord of blackness and centuries-old oppression. If there’s one thing my people do well, it’s grieving with those who grieve.

But it took many emails and frustrated conversations with my white familia to see the source of their consternation over such sermons was they do not see themselves as being in solidarity with whites as much as they do a collection of individuals.

This is how whiteness functions in our society, and I place no moral value on this. We can debate on whether or not whites should see themselves as a group, but the white sociologist Dr. Robin DiAngelo helps to unearth this truth in her profound book, White Fragility.

Her book, and more importantly my relationships with dear white friends has helped me to see this. Armed with this information about humans, I am better able to bridge hermeneutical and homiletical bridges to the white humans in the congregation.

Authentic relationships that span the ethnic divide have an annoying habit of laying us bare, for they unearth all of our hidden biases. It was Dr. Korie Edwards who said the homogenous church actually entrenches prejudice and racism, because as a means of our sanctification we need relationships with people who look and see it differently. Viewers of Fox News need MSNBC friends and vice versa. This is Sanctification 101.

And if I understand Paul correctly, this is Preaching 101. Our effectiveness in the pulpit to reach a multiethnic cohort begins, not just in our study surrounded by a sea of books, but at dinner tables and coffee shops with people who look and see it differently.