Evangelism, Racial Tension, and Clay Feet: Reflections on the Life of Billy Graham 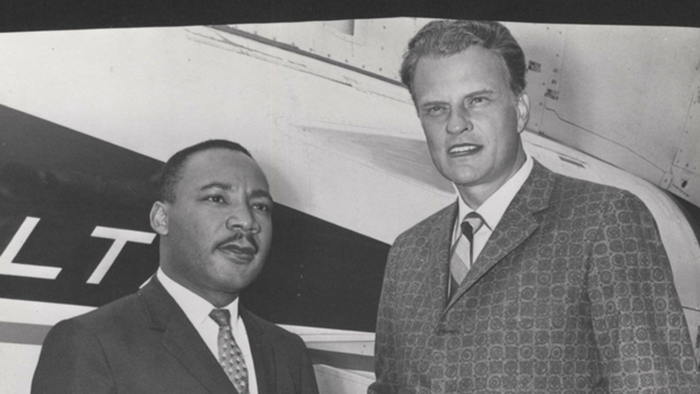 “People are often led to causes and often become committed to great ideas through persons who personify those ideas. They have to find the embodiment of the idea in flesh and blood in order to commit themselves to it.” - Martin Luther King, Jr., February 13, 1961

For 20 years, I didn’t know a thing about Billy Graham. Over that time, he came to be affectionately known as America’s Pastor. But as an American, I had not heard one of his sermons or watched any of his crusades. As it turns out, I wasn’t alone.

As LifeWay Research recently pointed out, 33% of Protestant churchgoers don’t know Billy Graham’s ministry. I’d venture to say that a good percentage of those churchgoers are African-American. For 20 years of my life, that was true of me. As an African-American man raised in a Baptist church in the South, Graham wasn’t on my radar.

In fact, I stumbled upon Graham’s ministry accidentally. As I consumed biographical content about one of my heroes in the faith, Martin Luther King, Jr., Graham’s name and his relationship with King peaked my interest. Who was this man of whom King said, “Had it not been for the ministry of my good friend Dr. Billy Graham, my work in the Civil Rights Movement would not have been as successful as it has been?”

Graham met King during a 1957 crusade in New York. They soon became friends—a friendship that led King to ask that Graham call him by his childhood name, Mike. As I read more about Graham (via King’s life), I decided to listen to some of Graham’s Crusade messages. They were simple, yet profound. As I listened, I hoped one day to learn more about his life and legacy. Little did I know that one day, I’d be working at a Center named after him.

A year and a half ago, I sat down with Ed Stetzer, the Executive Director of the Billy Graham Center at Wheaton College, to discuss my candidacy for the managing director role at the Center. After several years on staff at a Chicago-area church, the new leadership position at the Center was intriguing to me for a few different reasons.

First, if anyone embodied the primacy of gospel proclamation in our time, it was Billy Graham. He was evangelism personified. Conservative estimates show that Graham preached the gospel to 200 million people around the globe during his ministry. He preached the cross of Christ without compromise and is perhaps the most significant evangelist of the 20th Century.

Because Graham embodied evangelism in a way that I felt would inspire others to share their faith, I decided to commit myself to the work of the Center—resourcing the church to reach the world for Jesus. Besides, if I was going to grow more deeply in my personal evangelism, what better place to nurture the practice than at the center named after a man who committed his life to doing just that?

Second, (and this is very important for me), I felt that taking on a leadership role at a Center named after Graham was my small way of living in the tension I believe Graham experienced throughout his ministry. That is, navigating the sincere desire for gospel proclamation while being looked to as a voice to flesh out the social implications of the gospel message—especially as it relates to racial tension in America. For Graham, that tension wasn’t always pretty.

Graham, at times, was an unlikely ally for African-Americans in the mid-20th century. Born in Charlotte, North Carolina, Graham was raised in a city that was a bastion of Jim Crow-ism—laws and policies designed to enforce racial segregation in the South.

Despite an upbringing where the society around him placed a governmental stamp of approval on segregation, over his life Graham wrestled with the tension of racial justice in America.

In his biography, Just as I Am, Graham reflected on his time at Wheaton College and how it helped start to form his personal view on racial justice: “At Wheaton College, I made friends with black students, and I recall vividly one of them coming to my room one day and talking with deep conviction about America’s need for racial justice.”

Throughout his ministry, he offered small hints that he condemned segregation as practiced in the South. Much has been written on Graham’s insistence on a racially integrated audience in select venues in the South—personally taking down ropes that separated attendees based on race.

He once preached: “Jesus came from that part of the world that touches Africa and Asia and Europe. Christianity is not a white man’s religion, and don’t let anybody ever tell you that it’s white or black.” But he lived in an era and culture that often thought otherwise.

Because the culture around him felt this way, at times, Graham had to make a choice. There were occasions when Graham relented when it came to the social norms of the day, allowing some segregated rallies for the sake of gospel proclamation.

What do I, as an African-American man, make of this tension? The same thing I realize about Christians throughout the centuries: As I reflect on Graham’s life and legacy, I look down, and I see clay feet.

Graham preached the gospel and the importance for men and women to trust Jesus with their lives. He was laser focused on proclaiming the gospel. For Graham, changing hearts was more important than changing policies. And he worked toward that end.

With that said, his focus on individual salvation led to some misses when it came to addressing the racism of his day. For me, this is just a reminder that each one of us has feet of clay.

I think Graham would have liked to be remembered in this way. A man who loved Jesus. A man who preached the gospel without apology. But a man who may have missed the mark at times when it came to race in America.

Despite knowing this, I work at a Center named after him. Why? In some way, in my work here at the Center, I hope to take down some of the 21st-century ropes we have set up over the past several years. I’m grateful that Graham told another of my heroes in the faith, John Perkins, that he regretted not doing more to remove the ropes of racism. He asked Perkins for his forgiveness. In his repentance, he demonstrated the gospel humility that he preached. In this, I find hope and courage to continue my work here at the Center.

When it comes to his own feet of clay around issues of race, Graham himself would likely say that he leaned on the same gospel he proclaimed. For grace when he didn’t get it right. And for Christ’s imputed righteousness which has led now him to the feet of the Savior he once proclaimed. May we all lean on that same gospel in the days, months, and years to come.

John C. Richards Jr. is managing director of the Billy Graham Center at Wheaton College and serves on the board of The Witness.

Join the conversation on Facebook
Tags:
None
Posted:
February 22, 2018

Evangelism, Racial Tension, and Clay Feet: Reflections on the Life of Billy Graham