Dear 'Whole-Life' Progressive Evangelicals, Did You Forget 'Pro-Life' and the Unborn?

Progressive evangelicals must speak into the abortion debate.
Ed Stetzer 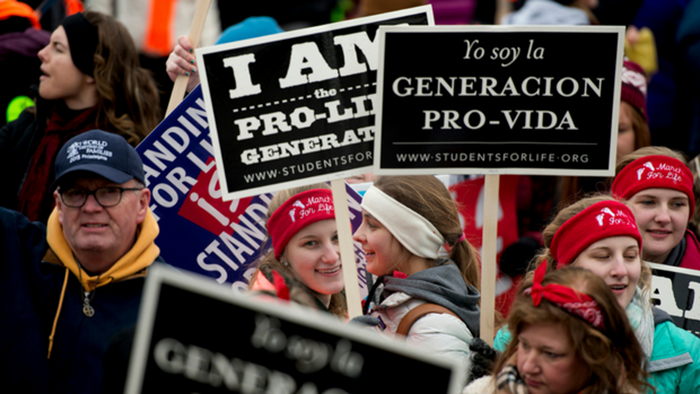 On Monday, the Senate voted on a bill—the Pain Capable Unborn Child Protection Act—that would ban most abortions after 20 weeks of pregnancy. The ballots were cast and counted and ended in a vote of 51-46—an insufficient tally to end the Democratic filibuster for which 60 votes are required.

Pro-lifers across the country watched as their elected officials failed to acknowledge the reality that what grows inside a mother’s womb is life. At 20 weeks it should be obvious to all, the infant is no unrecognizable jumble of tissue; it is a baby. It has fingers, toes, ears, and all the normal features. It wakes, sleeps, and, as this bill tried to tell us, it also feels pain.

Those key receptors are often developed as early as eight weeks after conception.

Here’s the thing, though: if our nation really cared about the sanctity of life, we wouldn’t need to know that these infants have nerve development in order to offer them the most basic protections. From a Christian perspective, life matters not because of what it can do or accomplish at a particular stage, but because of an individual’s personhood—his or her status as a being created in the image of God.

What Is ‘Pro-Life’ Anyways?

In recent years, conversations in the evangelical community surrounding the meaning of the term ‘pro-life’ have significantly broadened. This, in most cases, is done at the hands of more progressive evangelical Christians who find the original motivations of the pro-life agenda to be ‘cliché’ or, rather, too overtly conservative.

Most Mainline Protestants would be pro-choice, so this ‘broadening’ was more of an evangelical (and perhaps Catholic) experience.

We see this in literature and speech everywhere. For example, in his chapter in the new book Still Evangelical? Shane Claiborne argues that one of the underlying reasons why evangelicalism is suffering an identity crisis is due to its inconsistent social ethic. Listing a barrage of cases where evangelicals have apparently been negligent if not destructive, Claiborne argues:

Being pro-life doesn’t just mean being anti-abortion; it is about being for life. And an inconsistent ethic of life has caused many post-evangelicals to jump ship (Claiborne, 94).

This is not a new argument from progressives. Ron Sider, one of the fathers of modern progressive evangelicalism, famously argued that “the broader ‘complete pro-life’ agenda does not mean we forget about abortion” but that instances of persecution, suffering, and oppression are equally violations of the sanctity of human life.”

In language that nearly mirrors this line by Sider, Claiborne continues:

Wouldn’t it be beautiful to have a pro-life movement that stands against abortion, but also stands just as passionately against the death penalty, gun violence… Being pro-life is not only about protecting the unborn, but also about supporting folks after they are born (Claiborne, 94).

It is a criticism that I take seriously and one that many progressive evangelicals have been making, particularly in the wake of President Trump’s election. They have been adamant that Christians need to move beyond a simple devotion to defeating abortion and instead develop a theology that is pro-life in all its facets. What is important in this criticism is that even as they call conservatives to think more holistically about gospel ethics, they affirm their solidarity on the issue of abortion as an injustice.

Now, I’m not singling out Claiborne, because the issue is broader (and he has spoken on issues of the unborn in the past). However, I am quoting (and even agreeing with) him in many of his comments. Yet, Claiborne (and many other progressive evangelicals) have connected these things to the pro-life cause, and he’s not spoken clearly about this egregious vote (though he has referenced life issue in a rather innocuous way before the vote this week).

Thus, I don’t doubt that he has staked out a pro-life position, but I am asking progressive evangelicals to join with us for some pro-life action and advocacy in the midst of major pro-life events, if we are going to claim the mantle of ‘pro-life.’

That’s what I’ve done for refugees, immigrants, the incarcerated, and more.

We need voices when voices need to be raised.

Progressive Silence of This Issue

In the wake of the bill’s defeat, has Claiborne tweeted out the injustice of this act? The need for evangelicals and Christians to live up to their calling to be “for life”? No. He’s tweeted two Gandhi tweets. (One of which, ironically, disparages Christians for not living up to Jesus’ standard.)

Again, he’s spoken up elsewhere, but this is a key moment. And, let’s be honest, most progressive evangelicals have said nothing.

Yet, we cannot make the claim that ‘whole life’ is ‘pro-life’ and then be silent when it comes time for them to be prophetic against late-term abortion policies that are held by the United States, North Korea, China, and a handful of other countries. This is not a community of which we would want to associate.

I heard much of this during the recent tax cut debate— that pro-life people who supported tax cuts could not be truly pro-life, though (I assume) those protesting the tax cuts are more consistently pro-life.

Yet, that ‘whole life’ call rings hollow when you discard the unborn and can’t even speak up for life after the 20th week.

In other words, maybe you shouldn’t lambast conservatives for inconsistency or cowardice and conveniently fall silent when something as important as this comes up.

I know speaking up as pro-life feels very religious right. I get it. But, it’s still the right thing to do—the just thing to do if we care about social justice—even if your friends raise an eyebrow that you’ve not read the whole progressive rulebook.

When progressive evangelicals fall silent while the abortion debate flares up, they allow a secular culture to push aside and say, “Well, it’s those religious right people.” On the other hand, when Ron Sider speaks up for the unborn, as he does, it helps undermine the narrative and causes more people to think, “Maybe there is something for us to reconsider here.”

Yet, the silence now needs a critique. You see, their underlying agreement was that abortion was a major social evil and needed to be fought…that it was an area on which we agreed and upon which they were then calling us to a greater and fuller enactment of the gospel. They called us to speak truth to power in our own political tribe, making the compelling case that it was precisely the voices of conservative evangelicals that could pierce through the partisan bickering.

While there are still many conservative evangelicals who have ignored these voices, there are several, including myself, who have done that very think. I have tried to listen to the voices of progressive evangelicals that, in love and respect, called us to a more holistic and consistent engagement with issues of justice and social advocacy.

Because of my faith in Christ, I’ve spoken up on race, refugees, the environment, and more, because we were all in this ‘whole life’ emphasis together.

Then, I spoke at the March for Life in Chicago and, I guess, some of the ‘whole life’ people were busy that day. I remember the same when few spoke up on Planned Parenthood body parts videos. And, they were busy this week as well, I guess.

Fighting Against an ‘Agenda’

When the Gosnell case made headlines in 2015, I made the point that Mainline Protestants and progressive evangelicals needed to step up. At that time, I voiced my appreciation specifically for those voices that stood with conservatives in speaking up in righteous indignation at the atrocity of the case, the system that enabled it, and the attempts by others to minimize its scale. I specifically singled out the work of Matthew Paul Turner and Rachel Held Evans during that time as examples for progressives to follow.

But as progressives rightly remind us, the fight against injustice and oppression is a life-long battle. It is one that demands endurance and faithfulness to Christ. As culture becomes more polarized and politicized, it is vital that these voices endure with us in this battle.

So, this week, when we are left picking up the pieces after the defeat of this bill—when conservative evangelicals need the voices of progressives to speak with unity that this is a tragedy—I find a discomforting silence.

Thankfully, Roman Catholics have been consistent when many progressive evangelicals have not been.

Yet, honestly, I am saddened that many progressive evangelicals, after all their claims to prophetic witness, but when it’s not popular with our peers, are just as shy in speaking truth to power as their conservative counterparts.

To be clear: conservative evangelicals (like me) who have been critical of those within our own circles are not doing so in an attempt to curry favor or credibility with progressives. We did it because it was necessary for the integrity of our witness. As a result, I know of several evangelicals besides myself who have encountered a cost for speaking up about issues that aren’t always popular with the base. They have borne the cost of this courage silently and faithfully out of fidelity to the gospel of Jesus.

It’s time for progressive evangelicals to do the same.

Otherwise, please remove “not just abortion” from your forthcoming manuscripts on the problem with evangelicals.

Join the conversation on Facebook
Tags:
None
Posted:
January 30, 2018

Dear 'Whole-Life' Progressive Evangelicals, Did You Forget 'Pro-Life' and the Unborn?