Let's get a laugh or two, or even a raised eyebrow, from our fellow well-intentioned congregants.
Ed Stetzer 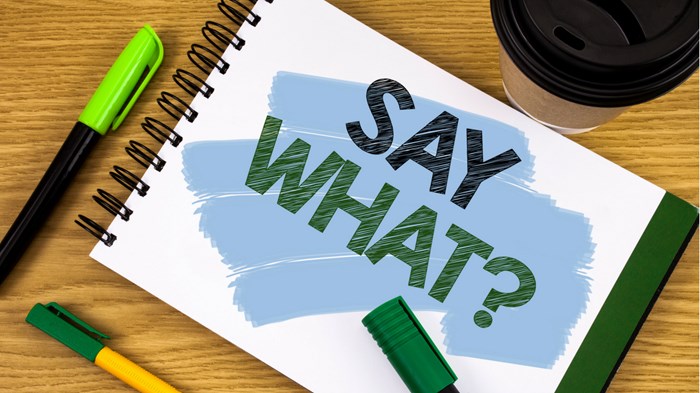 Image: By Artur Szczybylo via shutterstock
I recently had a guy come up to me after church and say, “You are getting better.” I thanked him and decided that was a win. And then I thought, Well, maybe other pastors get equally interesting responses so I put out a tweet asking, “What's the strangest thing anyone has said to you after a sermon?” I expanded it in another tweet to include comments after speaking in general. Some of these are priceless and I thought we’d take a day off from some serious stuff here on The Exchange to get a laugh or two, or even a raised eyebrow, from our fellow well-intentioned congregants.

EAP @eadampeek: “You told too many circumcision jokes, so we are leaving the church. If we wanted to hear a comedy routine, we would have just watched a Will Ferrell movie.”

Jeremiah Clements @JremiahClements: “Early in my first pastorate I had a guy stop me after service to introduce himself: “You know how Paul said he had a thorn in the flesh?” I nodded & he continued, “I’m yours.”

Liam Thatcher @liamthatcher: “I couldn’t focus for the entire talk coz you were wearing new glasses”

Brett Landry @BrettLandry: “That was, like, a really good TED Talk about Jesus!” (Excited guest who’d never been to church before)”

Scott Slayton @scottslayton: “Your preaching has gotten worse since your baby was born. It’s like you’re not as passionate about God as you were before.”

Jason Spears @Jason_Spears: “Coming from my other church and my former pastor to here listening to you is like going from filet mignon to ground beef hamburger meat.” … “Unfortunately, in my youthful insecurity, the next week I handed her a small bottle of A1 steak sauce and encouraged her to go back if she saw fit.”

Christopher Cahall @chriscahall: “Would you like me to tell you how many times you said “um”?”

Hershaelyork @hershaelyork: “I preached in Grenada, MS, and a guy came up to me afterward, shook my hand and said, “Spurgeon! Charles Spurgeon.” I was flattered, but thought he was overstating things a bit and I told him so and he said, “No, that’s my name. I’m Charles Spurgeon.”

Kris Freeman @PastorKris: “That was an amazing message. Too bad no one will ever respect you with your shirt not tucked in young man.”

John Blase @johnblase: “On the way out of church on Sunday a.m., a guy used to give my Dad a nickel for a swing-and-a-miss, a dime for decent job, and a quarter if heaven was stirred.”

Jeff Chandler @jeffmchandler57: “I was new to my first church and someone said: “You’re not like most pastors; when you say that you sin – we believe you.” Still trying to figure whether that was a compliment…”

J-T Richards @JT_Richards: “While I was preaching a sermon on a text mentioning circumcision, a man in his 90s leaned over to my dear wife and said, “I’ve been circumcised.”

Challis @challies: “Have you ever read any books on public speaking? You probably should.” That was after my first-ever sermon at a conference.”

Gary Buchanan @Buchanan_G: “Elderly female guest pianist to me after the service – Did you go to seminary?
Me – Yes ma’am
Her – Did you graduate?”

Nate Farrow @_natefarrow: “Had a sweet elderly lady tell me in all sincerity: “That was such a wonderful sermon that it put me right to sleep”

Jonathan Guerry @JonathanGuerry: “My second time to preach I forgot to pray at the end of my sermon. I just walked off stage. No one said anything… but a girl in the back started the slow clap. It was amazing.”

Scott Sullivan @scottsull7: “Not me as I’m not a preacher, but I know a brother who received an anonymous note after preaching that said, “the Gettysburg address was only 272 words.”

Paul Johnson @pastorpaulj: “That was a good sermon. It looks like you need a hip replacement.”

Patti Pierce-Miller @PattiTheMiller: “Visitor a few weeks ago told me, “Yeah, it was pretty good, I mean you’re pretty passionate about what you’re saying – probably cuz you’re a woman. Most preachers are men. Also… I mean, there’s a LOT about Jesus. Like, a LOT. But it’s ok, it was pretty good.”

Tom Peers @PastorTomPeers: “The Lord healed me of insomnia during your message.”

Joe Puentes @joepuentes: “Once I had someone tell me I talk too much about Jesus in my sermons so they were going to attend another church.”

Dustin Hall @PastorDHall: “Good sermon, but I noticed one of the citations on one of your slides had a period out of place.”

Casey Scott @caseyinakilt: “Best compliment and strangest comment goes to the same guy: after a particularly intense message on sharing our faith, one old farmer came up to me and said, “well, you really kicked me in the teeth today… thanks.”

Dan Donahue @dpdonny: “I saw a documentary on Hell and thought of you.” Um, thanks… I think?”

Joey Rogers @JoeyRogersMBC: “Had a visitor at a church plant I did back in 2000. He told me it was the clearest Bible teaching he’d ever heard. However, it was not of God because I didn’t do “the Holy Ghost hack” after every sentence. Apparently, “the Holy Ghost overwhelms the breath of a real preacher.”

Vince Torres @VinceTorresNM: “A guy in my church approached me after what must have been a personally convicting sermon and said, “Great teaching. But don’t you ever talk to me like that again.”

Tim Williams @TimGWilliams56: “Every one of your sermons is better than the next one.”

Alan Rathbun @alanrathbun: “I was preaching in a church that met in a space with a bathroom just off the worship space. Guy said – “Your sermon was so good I left the bathroom fan off so I could hear you preach.”

Rando Acres @randoacres: “Preacher, I woke up this morning fully intending to go kill a man, but after hearing your sermon I’ve decided not to.”

John Everett @johnatignite: “Had a lady that would tell me after EVERY sermon “just keep trying.””

Dan Thompson @cdanielthompson: “One of these days you’ll really know what you’re doing.”