When we follow Jesus, we do what the Chicago River did in 1900: we change direction.
Christina Walker 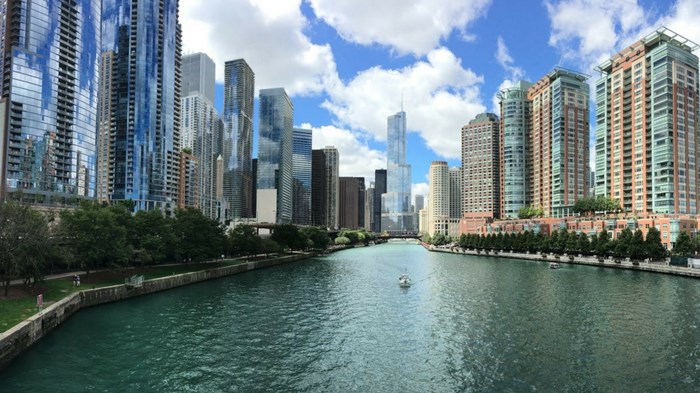 My husband and I live in downtown Chicago. Since I work at Wheaton College, people often ask, “Why don’t you live in the suburbs? Isn’t it a hassle to commute every day?” And from those who live in another state and only know the city fromknow the city the news, we often hear, “Is it safe to live in Chicago?”

Living in the city was an intentional choice for us. We wanted to rub shoulders with men and women from all different backgrounds who might be open to hearing about God’s love and his invitation into a relationship. Plus it’s fun! We love the hustle and bustle of the city, the cultural variety of people who live here, and the great activities that happen throughout the year.

As just one example, every year to celebrate St. Patrick’s Day, the local Plumbers’ Union dyes the Chicago River green. This tradition is more than 50 years old and draws over 400,000 spectators to the banks of our river. Some years are a little more interesting than others. In 2013, we stood by the Wrigley Building and saw a flying leprechaun! Admittedly, most of the people who gather are just there to party, but it’s a tradition that we love to attend.

What makes the whole process most amazing to me is where the plumbers put the vegetable-based dye: at the mouth of the river by Lake Michigan. Then the dye flows back through the city, slowly turning the river green. Your see, the Chicago River flows backwards, away from the lake. Until the dye starts to mingle with the water, you don’t really see the direction the water is moving. Once that emerald color starts to mix in, you can begin to trace the currents moving west.

This reversed flow is because in the 1800s as the city boomed, the Chicago River was polluted with waste and sewage carrying waterborne diseases, especially cholera. As it flowed into the blue waters of Lake Michigan, the river transported that filth right into the city’s primary source of drinking water, causing frequent epidemics.

Desperate to find a way to clean up the river, city officials embarked on a crazy plan. A 28-mile span of land separated the south bend of the Chicago River from the Des Plaines River, which flowed towards the Mississippi. On January 2, 1900, after eight years of digging by 8,500 workers, a crane scooped the last remaining chunk of dirt out of the way. The foul water poured through, forever changing the direction and water quality of the Chicago River. In 1999, the American Society of Civil Engineers chose this project as the “Civil Engineering Monument of the Millennium.”

This year for the St. Patrick’s holiday, we have some family coming up to visit. As I was looking for the parade details online, I ended up on a website that included some history of Patrick’s life.

In about 405 AD, when he was 16 years old, Patrick was captured in a raid and taken to Ireland as a slave. After about six years, he escaped and returned home. In his mid-40s, he felt called to go back to the land of his former captors and bring them the good news of Christ. Rather than harbor malice, he forgave those who had wronged him and committed to serving the Irish people. God blessed his ministry and soon Ireland, a previously pagan land, was considered one of Europe’s Christian centers.

As I was reviewing his story, thinking about how Patrick turned around and went back to Ireland as a witness, my brain did that thing which sometimes happens where two disparate thoughts suddenly collide and create a new connection.

The Change of Direction in the Christian Life

In Scripture, the invitation to salvation is sometimes described as stréphō, which means to turn around; to change direction, to convert. Jesus used this word in Matthew 18:3-4: “Truly, I say to you, unless you turn and become like children, you will never enter the kingdom of heaven.”

When we follow Jesus, we in essence do what the Chicago River did in 1900: we change direction. And we know this 180-degree turn is infinitely more miraculous than the engineering feat that reversed the river. We are forever changed; the filth of our transgressions is washed away.

Then, once we have turned around, we don’t just stay there. We begin to swim in a stream of living water that flows the opposite way from what the world expects.

In the same way that the Chicago River’s flow isn’t immediately obvious, at first glance people can’t always recognize that the courses of our lives are different. Yet, if they spend any time with us, just like if they were to take a boat on the river or sit near the edge for more than a few minutes, they should be able to tell that we have turned around and gone the other way.

Even more, our new path includes being sent forth to share the gospel, as Patrick eventually discovered.

When I guest lecture in the Evangelism and Leadership courses at Wheaton College, we discuss some of the many ways we can personally communicate our change of direction. One of those ways is through the tool of narrative. Stories capture our attention and move us. Jesus knew this and was constantly using tangible examples from his context to draw his listeners towards God.

Using this same method, the next time I share the gospel with one of my Chicago neighbors, I will have a great way of describing what it means to turn around and follow Jesus.

For those of us who are leaders in the Christian community, there is an even deeper parallel. We have the added opportunity and even responsibility to reveal that thousands of Christians are already flowing in this reversed river. Like the plumbers, we need to figuratively pour the dye in the water so others can see the communal change of direction.

In part, we can ask ourselves if our church activities help bring living water to those who desperately need it or if we are hoarding that water. Are we willing to sacrifice and leave comforts behind like Patrick did or are we content staying in our insulated church communities? Perhaps we are flowing like underground citadels, hidden currents that don’t give evidence of our turned around lives. Instead, we are called to be the water of life, streaming through our city, reversing the flow, and leaving behind cleansed hearts and lives.

As I stand at the river’s edge this St. Patrick’s Day, surrounded by the many people who are simply there to party, I will be offering up this prayer:

Lord, as I live side by side with the diversity in my neighborhood, help me show the evidence of my own change of direction. Help me to go to my neighbors, like Patrick did, to share and show the love of Jesus with them. And for the many churches in our community, give our leaders wisdom as they seek to draw attention to the countercultural but invitational reversed flow of the church.

Join the conversation on Facebook
Tags:
None
Posted:
March 16, 2018

Changing Direction – Reflections on the Chicago ...