Many Russians, be they Orthodox or Evangelical, will understandably view their homeland with affection, loyalty, and patriotism.
Brian Stiller 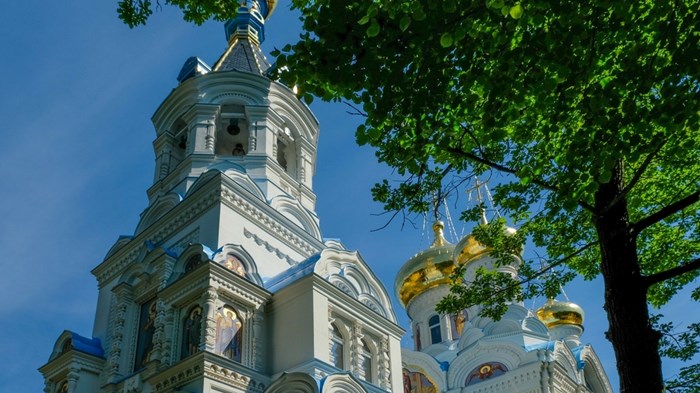 After brief instructions from the Lutheran Archbishop Dietrich Brauer, we processed up the center aisle of the St. Peter-and-St. Paul Lutheran Cathedral in Moscow, launching the 500th Anniversary observance of the Protestant Reformation.

Robed in gowns and hats of all colors and shapes, leaders of various Christian groups gathered in this important Moscow celebration: Lutherans, Evangelicals, Pentecostals, Roman Catholics, but there were no Russian Orthodox representative in the procession. As we passed the front row moving toward the raised platform, I saw an Orthodox priest standing.

Even as we gathered around the altar for prayer, he remained apart. Later, I learned that while he would attend the service, he would not join in procession or prayer: according to the ancient Orthodox rule, a priest who prayed with heretics would lose his priesthood.

This is Russia. A country in curious shifts and alterations more mysterious than the Trump/Putin insults and bravados. I live with memory of a state, the Soviet Union, ruled by atheists insisting that the Communist and Marxist dictum of “no God” be their country’s mantra.

But it is wrong to assume that atheism rules, indeed, if it ever did. Make no mistake, this is a religious and, in fact, a Christian country, if one were to define a country by what its people believe. The Pew Foundation noted that 74 percent of Russians identify as Christian. However, even with this remarkable percentage of self-confessed Christians, Russia is dynamically secular, with a definite separation of Christian witness from its civil life, apart from official Orthodox ceremonies.

To catch up on recent moves by Putin, a quick review of the role of faith in this grand country is helpful. In the tenth-century AD, the Greek Orthodox Church, invited by Kiev's Prince Vladimer, went to Russia evangelizing its people. Over the next centuries Christians were primarily members of the Russian Orthodox, a church that sounds, smells, and looks like the Greek Orthodox, its spiritual parent.

Following the fall of the Czars and rise of the Communist Party, the church was repressed, driven into servitude. Those who refused to bow paid the price. In 1925, Patriarch Tichon was deposed by the Marxist regime and a more compliant Sergius was enthroned as Patriarch until 1944. It was the first time the Orthodox Church had lost support of the state.

Lenin in time made the country officially atheistic, and religion was severely restricted. But like all such places and repressions, in the underground away from the centers of political power, people carried on in faith. We must not forget that this is a land with enormous Christian affection: its landscapes are dotted by churches and monasteries, its story books filled with pictures and stories of saints and martyrs, its music and literature made rich by Christian composers, artists, and writers.

It was, however, Gorbachev in 1985 who allowed faith to publicly revive through perestroika and glasnost. Following the fall of the Soviets, thousands of Evangelicals from the West rushed in, leading to extraordinary mission activity. Many Russians were converted, churches were established, and various initiatives in camping, media and music grew.

That lasted for about a decade. What ensued was a letdown among Russians after many of their enthusiastic and resource-generous Western friends picked up and went home.

In time, Putin, a lifetime KGB officer, branded himself as a believer. The church which had lost its status under Lenin was now seen as an essential Russian entity. The return of the church to national status was part of the exercise in reviving Russian nationalism. The hope was that the former greatness of its people and culture would be recognized again, not only in Russia but among the countries and leaders in their sphere of influence.

In July 2016, the Yarovay Bill was passed in the Duma. It requires that religious (missionary) activity be allowed only in registered churches, to ensure that people witness of their faith only in places authorized by the state.

However, sharing one’s faith is allowed as long as the listeners aren’t invited into particular religious events or places of worship. This in effect serves to eliminate house churches and shut down missionary activity. While officially the law was concerned only with controlling groups trying to convert those outside their faith, in reality police can charge most any kind of religious activities not done specifically under the auspices of a state-registered church.

William Yoder* in a recent column noted that a former president of the Russian Baptist Union commented about the August 17, 2017 government banning of Jehovah’s Witnesses: “This measure destroys the constitutional right to freedom of conscience.” And in doing this, “the political establishment has demonstrated its ignorance and its choice of force as the primary instrument for destroying the constitution.”

Yoder reports that only five days earlier, Evangelical Christian Bishop Alexander Semchenko forecast that he saw the next step would be an outlawing of Charismatics “followed by the Baptists – by the nonregistered ones in particular.”

This new law protects the Russian Orthodox Church. To be Orthodox is to be Russian, and to be Russian one assumes you are Orthodox. The most obvious response is that the non-Orthodox are losing freedom to practice their faith as they choose, and that outsiders are not welcomed to propagate their faith. Freedom to confess your faith is still in place, but done peacefully, silently, in the corner, so as not to disturb others. In this way, it keeps the non-Orthodox distant from society and, in time, it is expected that they will die out.

Yet, in the past six years, the Russian Pentecostal Union has founded over 1,000 congregations which are registered and therefore free to conduct services, as long as they stay within the new legal limits. They developed a “One Year for Jesus” program, challenging young people to give one year of their life: each joining a group of 25 going to villages where there were no existing churches (at least Orthodox).

Visiting from door to door, they asked if there was something they could do to help villagers. Out of this came conversions and establishing of congregations. Much of the growth has been in Siberia and the Russian far east, places where Orthodoxy is less concentrated.

Those of us living outside the Russian experience, influenced by Western media and historical memory, mistake our views as universal for other Christians. Many Russians, be they Orthodox or Evangelical, will understandably view their homeland with affection, loyalty, and patriotism. The power of the United States is seen as needing an offset, a world counterbalance, and in their view, no country is better suited to provide this than Russia.

We gathered around the communion table for prayer in this Lutheran Cathedral, taken by the Soviets in 1938. Used as a movie theatre and film studio, it was reoccupied by the church shortly after the fall of the Soviet Union, but only on October 25, 2017 was it formally returned to the Evangelical Lutheran Church. Another story in the complex saga of Russia and its Christian minorities.

In our flawed and curious maze of east and west interfacing, I inevitably end up asking my Russian brothers and sisters, “What can we do?”

At the top of their requests is, “Please don’t forget us.” As fewer Christians now travel to Russia, Russian Christians feel somewhat abandoned. Try this. Link your congregation with one in Russia, build friendships, encourage them, let them know they are remembered.

Walls have been built and then torn down with no promise that they will not be built again: freedom given can quickly be taken away.

As the Apostle Paul signed off his letter to Timothy, “Do your best to get here before winter.” Find ways to be alongside these our spiritual counterparts in this land of intrigue and opportunity. And let’s do it before another winter comes.

*William Yoder, an American born Mennonite lives and works in Eastern Europe. His frequent writings can be accessed at rea-moskva.org.