The life the Bible offers is not one that is safe from the tragedies of the world, but one in which God suffers with us and accompanies us through our hardships.
Ed Stetzer 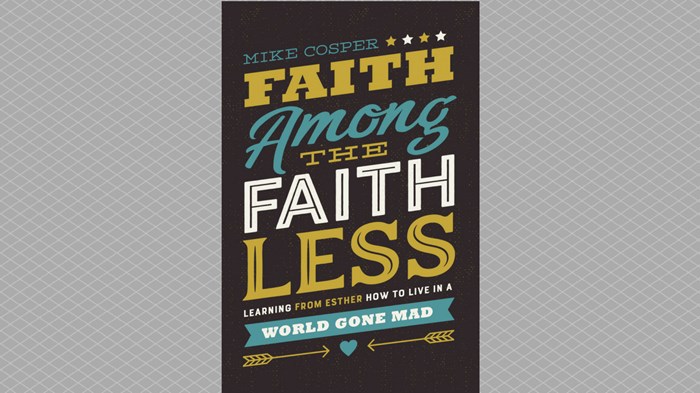 Mike Cosper, executive director of Harbor Media, a non-profit media company serving Christians in a post-Christian world, recently wrote Faith Among the Faithless: Learning from Esther How to Live in a World Gone Mad. He served for 16 years as a pastor at Sojourn Community Church in Louisville, Kentucky. Below are 20 truths from Mike’s new book.

1. Secularism denies real transcendence. It might allow for the possibility of the experience of transcendence, but it must explain it via these material causes: What we call transcendence or religious experience is actually some combination of good hormones and happy neurons in the brain. It has some evolutionary cause— some root in the need to advance and preserve our species that has been written into our DNA. (pg. 13)

3. This is how most of our desires work: Through cultural stories, we’re offered images of the good life: pathways to love, romance, sexual fulfillment, power, money, and happiness. These stories grab hold of our hearts, and they shape what we think we want. (pg. 19, referring to James Smith, You Are Wheat You Love, 11-12)

4. When God’s people face opposition, including the cultural opposition Christians face today from a post- Christian world, the path of least resistance is the path of compromise. It’s a foot in both worlds. I’ll give you an ethical compromise here so long as you let me speak of faith in public. But if history teaches anything, these compromises always end in weakening the church’s prophetic witness. (pg. 39)

5. Rather than an ethnically and culturally bonded community, the church’s bond is to be around the gospel, which creates a new family, one in which people are radically committed to one another’s inclusion and well- being. This new family is to be marked by generosity, diversity, and love. (pg. 42)

6. Just as Ahasuerus is a pun on “headache,” Esther is a pun on the Hebrew word for “hidden.” Hiddenness is a theme that follows her throughout the book. She passed for a Persian, and for most of the book, no one knew she was Jewish. (pg. 55)

7. We, too, are enslaved and abused by our culture. Think of all the ways our world tells us we’re inadequate, and all the ways it tries to sell us on something else that will ultimately make us happy…Our whole consumer economy is designed to prey on our sense of weakness and our longings, and it works. We are an anxious, rootless, desperate world. (pg. 61)

8. Humanity is both responsible for its fallenness and cursed by it. Both sinner and saint. A fallen world and a host of evil spiritual forces are wreaking havoc on our souls, and the tantalizing power of idols lies in their offer to heal our wounds. (pg. 64)

9. People of faith get blamed for a lot of evil in a post-9/11 world. Religious terrorists killed thousands of Americans on that day, and in the years since, they’ve wreaked havoc the world over: terror attacks, ISIS, and more. At the same time, evangelical Christians have been increasingly seen as bullies and bigots, archaic jerks who don’t want to bake cakes for their gay neighbors. The argument has been made more than once that religion itself is the problem, particularly when religion speaks of moral absolutes and eternal consequences. (pg. 80)

10. The late philosopher René Girard described our culture as one obsessed with victims and scapegoats. Once you gain the status of victim, you rise above any kind of moral responsibility or scrutiny. The moral imperative is about justice: How do we defend these victims from their oppressors? Any sins of the victim can and will be overlooked because, after all, they only committed them in response to their oppressor. (pg. 86)

11. The life the Bible offers is not one that is safe from the tragedies of the world, but one in which God suffers with us and accompanies us through our hardships. There is a utopian vision in the Scriptures, a promise of a time when all things will be made new, but that promise will be fulfilled only by Jesus himself, in a time he determines, and in a way that surely— like his first coming— will surprise us all. (pg. 107)

12. And yet, this, the book of Esther tells us, is how God sometimes shows up. In the silence. In absence. In the darkness of doubt, humiliation, and loss. In the most unlikely ways possible, the miracle of grace manifests. (pg. 120)

13. Esther’s choice is therefore one between death and death: a death defined by courage and a willingness to sacrifice on behalf of others, or a death defined by numbness and withdrawal. Only one path— the path of risk— offers deep satisfaction and real life. (pg. 126)

14. We are suspicious of joy. It opens us up to the possibility of disappointment. It invites pain because it brings us to a precipice, and it makes it possible to fall all the further and all the harder. (pg. 127)

15. When we run from pain and numb ourselves to the world, we foster this cynicism. We set joy at a distance because we’ve determined that the possibility of joy isn’t worth the risk of disappointment. When we’re pain avoidant, we’re joy avoidant. And a joyless life is no life at all. (pg. 128)

16. Esther the queen retreated into the palace for three days and took no food or water, and it was only then— hungry, wearied, dehydrated— that she approached the king….Those three days deserve our attention. They were a time of torment and agony. Abraham’s burden must have left him sleepless and weary. Jonah’s days inside a fish surely turned him into a horrific vision. I doubt he emerged unscathed. I imagine him bruised and tattered, his skin inflamed from all the horrible things happening inside a fish’s digestive tract. When Jonah arrived at Nineveh, he didn’t just proclaim God’s wrath— he embodied it: a horrifying vision of suffering and death. (pg. 132)

17. Esther’s story is the story of a prodigal, far from home, assimilated into a world where she didn’t belong, who had an awakening. Make no mistake, life among the pleasures of the palace is no different from life among the pigs— at least, not after you’ve awoken to the reality of the kingdom of God. (pg. 137)

18. But responsibility for Haman’s downfall lay with Haman. His grandiose vision led him to presume that the king would want to honor him above all his other subjects. It also led to his resentment of Mordecai and the building of a spectacular, seventy- five- foot stake. Those who resisted his spectacular authority, he thought, deserved a spectacular death. Yet it was he, not Mordecai, who became the spectacle. (pg. 152)

20. Point being, Haman was more than a pawn and more than an isolated plot point. As much as anything else, he demonstrated something deeply true about the way the world works. Not merely that power corrupts, but that the love of power has a corrosive quality that destroys. As (David F., Kenyon College Commencement speech) Wallace says, that’s true of anything. Love of beauty will leave you crippled with fear at the loss of your beauty. Love of money will leave you always feeling as though you’re in poverty. “Pretty much anything else you worship will eat you alive.” (pg. 154)

Join the conversation on Facebook
Tags:
Secularism
Posted:
May 25, 2018