Rural Matters
The Rural Matters Institute is a community for pastors and Christian leaders serving in non-urban contexts that was created to provide support, learning, and community. Read more from this column.
May 6, 2018Rural Matters

The presence of the rural church is critical if the gospel is to make an impact in the community.
Ed Stetzer 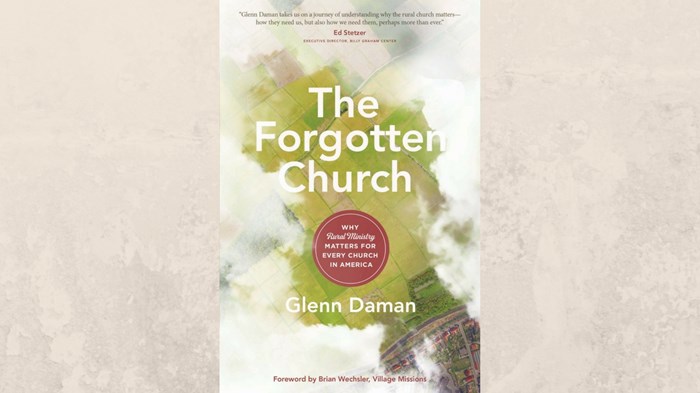 Here at the Billy Graham Center at Wheaton College, we are committed to serving rural church planters and pastors through our Rural Matters Institute. There is a lot of great things happening outside of our urban centers, and that’s why I’m excited to welcome Glenn Daman to The Exchange to talk about his new book, The Forgotten Church.

Ed: How did you come to write The Forgotten Church?

Glenn: I was initially approached by Moody Publishers in 2016 to write a book highlighting the struggles and issues that are confronting rural America and how the rural church is an important part of the universal church community.

It is my hope and prayer that this book would accomplish three purposes. First, that it would help raise the awareness in the broader evangelical community of the needs and issues confronting rural America. Rural communities are facing many struggles that threaten the social and spiritual health of the community.

Second, that it would bring the rural church back into the conversation and strategic planning of the broader evangelical church. And third, that it would provide those who are being called to serve, or currently are serving rural churches a better understanding of the issues and needs confronting their communities.

Ed: What are the primary factors that stop pastors from pursuing rural ministry?

Glenn: Rural churches are faced with a crisis of leadership. In a study of Presbyterian churches, it was found that over 50% of small (under 100) rural churches lack a full-time pastor. While there are a number of reasons for the struggle of rural churches to recruit pastors, there are three that are major contributors. The first is the inability to compete with the larger churches salary structure. While the rural church can often provide a sustainable salary, they cannot match the urban and suburban congregations.

Ed: What are some of the main conceptions that urban and suburban people have about rural life?

Glenn: Many people formulate their concept of rural people based upon modern media which either presents rural people as the embodiment of the Waltons or rural communities as Mayberry RFD. As a result, people fail to recognize that rural America is facing both a social and spiritual crisis that requires the church to develop new strategies for reaching rural people with the gospel.

Ed: What is the impact of these urban and rural misconceptions, specifically on how rural people are valued and respected?

Glenn: Because rural people are often viewed as uneducated and not progressive, they are looked down upon as being backwards and behind the times. Rural people then feel devalued and threatened as urban voters pass laws and regulations that affect rural people but fail to understand the issues confronting rural communities.

Ed: What are some of the defining aspects of how rural churches impact rural communities?

Glenn: Because rural communities are often isolated from social programs, people turn to the church to look for help in addressing social/economic problems, receiving counseling and assistance in times of crisis, and enhancing community wellbeing through community involvement.

But most important, the presence of the rural church is critical if the gospel is to make an impact in the community. Paul recognizes the importance of presence when he sets forth the importance of a person communicating the gospel to another (Rom. 10:14-15). Having an impact in the community cannot be accomplished in absentia.

Ed: Most media depicts rural life as largely white. What are the actual cultural realities and how do they impact the rural church?

With the growth of the Hispanic population (a 44% increase in the last 10 years), the presence of Native Americans, and the areas having a large African American population, racial diversity is becoming a reality in many rural communities.

As a result, the rural church needs to develop strategies for reaching across racial and cultural lines. Just as the church has been key in addressing racial tensions in urban areas, it also needs to be ready to promote racial reconciliation in rural areas as well.

Ed: What is the place of rural pastors in the community, and what unique opportunities does it offer?

Glenn: In small rural communities, the pastor has a greater opportunity to have significant ministry outside the walls of the churches they serve. People turn to the pastor to provide social, emotional and spiritual help. The pastor and the church are also a critical part of the social capital in the community.

Ed: What are the pitfalls of taking urban/suburban ministry methods into rural contexts?

Glenn: Trust and an understanding of rural culture is critical for effective ministry. Rural people are suspicious of those who come from outside the community and attempt to bring a “once size fits all” methodology to the church. While suburban ministry is driven by goals, objectives and desired results, rural ministry is driven by relationships. Thus, it is critical that leader first builds trust within the congregation before implementing change.

Ed: How can urban and suburban churches best partner with and support rural churches?

Glenn: Effective partnership begins not by seeing the rural church paternally where we enter into a partnership with the goal of “saving” the rural church, but rather as a genuine partnership where there is equal respect. It is important that the rural and urban church learn from one another and benefit together by forming partnering relationships.

Join the conversation on Facebook
Tags:
Rural Ministry
Posted:
May 6, 2018