Darkness, in its many intimidating and frightening modes, is not the final word.
Brian C. Stiller 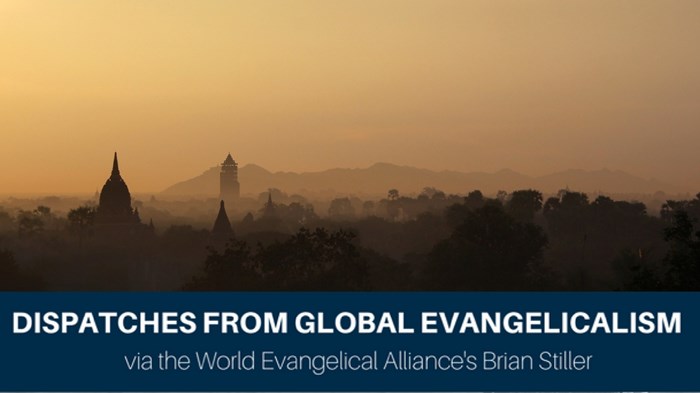 As I walked among the glistening gold-plated stupas of the Shwedagon Pagoda in Yangon, Myanmar (formerly Burma), it was hard to believe that just miles north, a genocide took place masterminded by the country’s military.

The Rohingyas, a people-name once unknown, is now a common point of our conversations. But even as we assume the worldwide accusations are self-evident behind the genocide of these ethnic Muslims in the heart of a Buddhist country, complexity rules—a fact of which the small Christian community there is well aware.

We wonder at the silence of the country’s de facto leader Aung San Suu Kyi, who was awarded the Nobel Peace Prize in 1991. What are the factors in the social architecture of Myanmar that have contributed to this seemingly unforgiveable tragedy?

To begin, Myanmar is a country of 54 million people, divided into eight major ethnic races grouped by region, more so than language or ethnic affiliation. These regions camouflage its actual 135 distinct ethnic groups!

We too quickly assume that globalization is good, unifying people of all kinds of cultural strands. Democracy and human rights we value so highly are not necessarily embraced. Tribalism often rules, and Myanmar is a prime example. Mistreatment of ethnic or religious minorities is nothing new in what was formerly Burma. Internally, there are some 600,000 displaced persons, not counting the tens of thousands still in camps in Thailand and other surrounding countries.

Although Myanmar is, nominally speaking, a country with a government of an elected parliament, it is still the military who rules. Myanmar held general elections in 2015; however, 25 percent of the seats in parliament are controlled by the military.

Even more important, the military, called Tatmadaw, appoints the Minister of Defense—which in turn controls all local police—and the head of the largest economic corporation in Myanmar. In addition, the judiciary is not independent. In short, there is nothing here that is independent in politics, law, or the economy. The Tatmadaw have a hammerlock on the country. In the 2008 constitution, they maintained rights, whenever they so choose, to take over and return the country to a military dictatorship. This creates a lingering fear among many, especially during the past months of the Rohingya debacle.

The Genocide of the Rohingyas

In this predominately Buddhist country, the Rohingyas have been a minority held in suspicion by the ruling powers for a very long time.

Living in the Rakhine state, with roots in Bangladesh, they trace ancestry in Burma to the eighth century. Even so, Myanmar law does not recognize them as one of the eight “national indigenous” races.

Seen as illegal immigrants, the government identifies them as “Bengalis”; not only do they lack basic rights, but antagonism and agitation were hyped by a Buddhist majoritarian religious nationalism. This inciting of hatred over the past decades turned the state of Rakhine into a powder keg.

We might compare it to Rwanda. There, as in Myanmar, the composite build-up of hatred among its people groups began with its former colonizer, which in the case of Myanmar was the British, who imposed identity based on race.

In August 25, 2017, the rebel faction, the ARSA (the Arakan Rohingya Salvation Army) attacked 30 security force locations and killed 12 military personnel. This was all the government needed to pull the trigger. The army moved in and it is estimated that within a month, 9,000 were dead, with reliable reports of rape, torture, and burning of villages. Today, over 900,000 Rohingyas have fled, mostly to Bangladesh. The charge of genocide against the military is uncontestable.

The European Union imposed sanctions against seven top Myanmar security officials, accusing them of violations of human rights, including killings and sexual violence. This is generating in the military a scramble to get these discomforting restrictions lifted. The United Nations has been asked to refer this to the International Criminal Court.

The Puzzle of Violence by Buddhists

How could this blood bath happen by the hands of those portrayed as peace-loving Buddhists? A simple answer involves the motives of the military with their sense of outrage. Led by the Baha majority over the years, the military fused religion and nationalism into an explosive mix.

Francis Wade explores their fear of losing the purity of their faith and cultural dominance: “Why in the changing landscape of Myanmar, had there emerged factors so fierce in their fervor that they would build a fence with their bones, or that they would, contrary to their words, seek to kill off whatever threat to their religion lurked amidst them?”*

Fear stoked anger and violence against the Muslim minority, especially in the state of Rakhine, alive with rumors that Muslim hordes were taking over. Irrational behavior took hold, stirring up mob violence to kill, rape, and annihilate entire villages. This tragedy is not the first time in our world that fear and anger have generated a hatred-inflaming evil instinct, driven into ethnic cleansing.

This is a real part of the recent Myanmar story.

What are we to make of Aung San Suu Kyi? Decades ago, the West rushed to heap accolades on this “Lady” of the land for courage and grace. But in not condemning what the military did to the Rohingyas, she is now condemned—praise shredded by disgrace.

She was the daughter of its first post-colonial leader, Aung Sui, who was assassinated in 1945, just six months before taking leadership after the British. Trained in Oxford, she married and had children, but returned and led a revolt. She was put under house arrest on and off until 2010, when she became its leader. The Nobel Peace Prize she was awarded for her earlier efforts in achieving a kind of democracy for her country is now in dispute; now there are calls to have it rescinded.

Has the world judged too soon? The country is, in practice, a military dictatorship; the power of the parliament is fleeting. Any criticism of their actions or challenge to their authority may trigger a return to the old military regime. The country sits on the fine edge of tribal hostilities.

How is she able to manage the internal hatred—emotions fueled by overcrowding, militaristic Buddhism, and nationalism? What she has been doing is not only unknown to us outsiders, but to those who live in the land.

She did say that she condemned “all human rights violations and unlawful violence” and that she felt “deeply for the suffering of all people caught up in the conflict.” This declaration, of course, has neither satisfied Amnesty International nor most governments, especially in the West.

Could she have stopped the genocide? Should she have either resigned or at least spoken up earlier and with greater clarity? We wished she had. Was she able? In time, we may learn that more than ever she needs bolstering from the outside to reinforce her role in providing internal resistance to the military. In the long run, this may matter more than our chorus of defamation.

What then is a follower of Christ to do? While Christians make up close to ten percent of the population of Myanmar, for years they have lived under military oppression. They have faced opposition and outright persecution from the ruling military and its majority religious nationalists.

Nevertheless, the gospel has sent its roots deep into the land. Today, there is some Christian influence in government. A Christian politician serves as Vice President of the government and another serves as Speaker of the House.

This is no guarantee, of course, that justice will prevail, but it may be an important stage in the gradual influence of the Christian community. Christians are slowly coming out from under that memory of oppression and beginning to see their influence in ways they haven’t seen possible.

As churches are planted, as Christian colleges and training schools become increasingly active, as Bible translation continues, as agencies in relief and development do their life-saving work, there is a perceptible hope for better days.

I stood before 200 college students, resilient and driven to make Christ known. I reminded them they have the world’s attention and that their response is a teaching moment for Christians in other countries.

But they are in a hard place. Now Christians in the southern states of Myanmar have relative peace. If they noise their opposition to the military, they face two possibilities: the military could come down with an iron fist, or push aside government—as powerless as it is—and reinstate military rule. More alarming, and what is not reported, is that the Kachin people—some six million in the north and 90 percent Christian—are under attack. They are experiencing hostile treatment similar to what has been leveled against the Rohingyas.

For many followers of Christ, local issues seem insurmountable and solutions unavailable. The Apostle John said this about the coming of Jesus: The light shines in the darkness, and the darkness has not overcome it. Darkness, in its many intimidating and frightening modes, is not the final word. The gospel is perpetual light and light is in Christ’s hand. His people, radiated by that light, will be a means by which menus of politics written in the dark are brought into the light.

For my colleagues and friends in Myanmar, discerning the facts and seeking to live in the midst of those realities, I pray that in the power of the Spirit, framed and inspired by the loving justice of our risen Lord, you will be courageous and wise in speaking what is true.

Living with Caesar has never allowed for easy choices.

*Francis Wade, Myanmar's Enemy Within: Buddhist Violence and the Making of a Muslim ‘Other,’ Zed Books.

Brian Stiller, son of a preacher, is global ambassador for the World Evangelical Alliance. He served as president of Tyndale University College & Seminary in Toronto. His latest book is From Jerusalem to Timbuktu: A World Tour of the Spread of Christianity.