How do we know God loves us when we can't feel it?
Kimberly Reisman 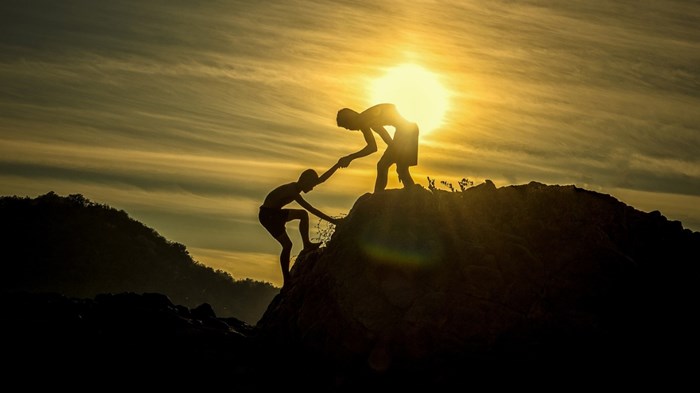 Maybe too much sometimes. When people talk about having certain spiritual gifts, I always say I have the spiritual gift of weeping. I cry at weddings and baptisms and movies. I can't sing Charles Wesley's hymn And Can It Be without getting choked up.

There's just something about the words, "Amazing love! How can it be that thou, my God, shouldst die for me?" I'm not a very good singer, but I love to belt those words out. Toward the end of the song it says, "My chains fell off, my heart was free, I rose, went forth, and followed thee." At that point, I usually have to keep myself from jumping up and down with gratitude and joy.

Jumping up and down to Charles Wesley—go figure.

Not surprisingly, I resonate with Scriptures like Paul's word in Romans: “You received God’s Spirit when he adopted you as his own children. Now we call him, ‘Abba, Father.’ For his Spirit joins with our spirit to affirm that we are God’s children” (8:15-16, NLT).

That kind of gut-oriented experience of the faith is foundational for me. I’m a true daughter of John Wesley, whose heart was “strangely warmed.”

This gut-oriented way of approaching the world made a recent encounter very disorienting. I was approached by a young woman toward the end of a weekend together. She earnestly asked how she could really know that God loved her if she couldn't feel it.

She had heard me speak three times already and had been involved in my three-hour teaching session on faith sharing. It was now about five minutes before the last service was to start and she was desperate to know if what I'd been talking about all weekend long was really true.

She continued that it wasn't just about feeling God's love. She couldn't feel anything. Things had happened in her past and she had dealt with them by repressing, pushing down, and blocking out any and all feeling within her. I have no feelings, she said, and as I looked into her eyes, I believed her.

How is it that we come to know God's love? Is it only when we feel God's Spirit “bearing witness” with our spirit? Is it only when our hearts are “strangely warmed?” If we're not a “feeling kind of person,” does God not work in us and through us anyway?

I was struggling as the woman patiently waited for my response. Then I remembered St. Patrick’s ministry in Ireland.

Way back in the mid-400s, Patrick began traveling in that country, moving from settlement to settlement, staying with the people, loving them and working among them. Through his ministry, monastic communities sprang up. These communities were different from what we normally think of when we think of monastic communities where monks separated themselves from the rest of society for a life of solitude and prayer.

These were communities of committed Christ followers who lived and worked together, sharing resources, love, and life together. There were men and women, adults, and kids; some were single, some were married, some had families—some were priests, but most weren't, and they were all together in community.

One of the things that made these communities so cool was the way they treated outsiders.

There was always a gatekeeper, not to keep anybody out, but to be on duty all the time so that anyone who wanted to come in could come in, no matter what time of the day or night it was.

If you visited the community, the gatekeeper would welcome you first and then call everyone to come greet you. The abbot or abbess (head of the community) would immediately come out to make sure you felt at home.

It wouldn't matter what people were doing; they would stop because making guests feel welcome was more important than anything else. Then they'd show you to the guest house—the best accommodations in the whole place.

If you stayed for a while, they'd assign you a ‘soul friend’ to talk to—no agenda—just about whatever was on your mind. Eventually, if you continued to stay they'd talk to you about God's love and offer you the opportunity to become more than a guest.

It was a slow process of revealing God's love—a process that started with the concept of belonging and acceptance and moved only gradually toward commitment. It was a process that took time because it was about providing evidence of God's love. Not evidence in the form of skilled argument or tight logic; not even the evidence of a specific feeling even though that was probably part of it for most people.

It was the evidence of action—consistent actions of love, continued day in and day out, actions that made God's love visible and tangible and real through the welcoming, caring, support, and nurture of people. Evidence through action that God loves people and values them simply because they are.

Why Do You Come Back?

The worship leaders were ready to begin as I stood front and center in the sanctuary with this woman who wanted to know if it was true that God really did love her. Remembering those communities founded by St. Patrick, I asked her why she came to this particular church. She said that the people were kind to her and took her in when she returned to town after a long absence.

In the few years since she'd been back, they had consistently helped her and her children. Over and over, they had been there for her—even in really difficult times. It was as though they had made space just for her.

She hadn’t had to earn it, or demand it, or even fight for it. They had simply offered it to her, time and time again.

My mother always told me that people may doubt what you say, but they will always believe what you do.

Evidence through action. That’s how you know.

Kimberly Dunnam Reisman is Executive Director of Next Step Evangelism Ministries and provides leadership for evangelism seminars worldwide. She also is Adjunct Professor at United Theological Seminary. Kim is the author or co-author of numerous books and studies and the mother of three adult children. She and her husband live in West Lafayette, Indiana.