I fear evangelicals have risked years of processing past racial trauma for a future devoid of Black voices among them.
John C. Richards, Jr. 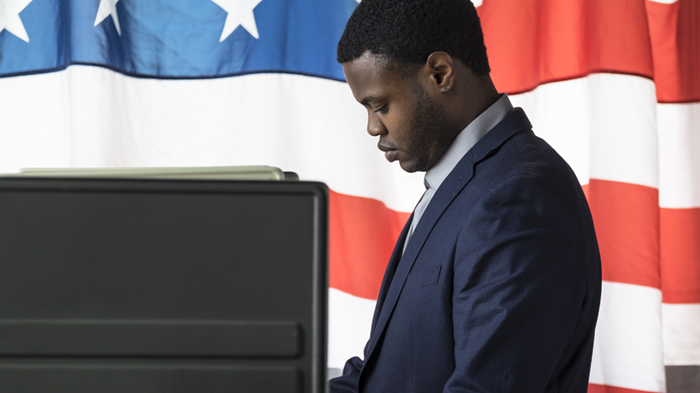 Image: By Burlingham via shutterstock
Today, the Billy Graham Center Institute posted the first of several releases coming from a recent research project. These releases will come out weekly over the next month with accompanying commentary.

For two years we’ve seen and heard it everywhere. Eighty-one percent of white evangelical voters chose to cast their vote for Donald Trump. Recently, my colleagues Ed Stetzer and Andrew MacDonald, in partnership with LifeWay Research, conducted a survey that brought more nuance to that 81% number.

They pointed to six key factors in evangelical voters’ approach to the 2016 election that might help differentiate between those identifying as evangelical and those holding evangelical beliefs.

The gist of their findings: There are several nuanced issues among evangelicals by belief that led them to vote for Trump. Understanding those nuances might help soften the perceived blow that accompanies looking at voting trends in the 2016 election.

One surprising data point from the research found that many evangelicals proverbially held their noses while voting for Trump, unenthusiastic about him as a candidate. For many, it was less about casting a vote for Trump and more about casting a vote against Hillary Clinton. Seeing these votes as begrudging ballots helps contextualized the number of white evangelical voters who voted for Trump. In that way, the data is beneficial.

While the data tells one story, I’m worried about the perception of apathy among evangelicals surrounding some of the President’s actions. In some instances, it’s more than a perception of indifference—it’s outright defense. Some are dumbfounded by a level of apathy or defense for issues that seem ripe for critique from the Christian community.

It’s hard to process data that says many evangelicals were unenthusiastic about Trump as a candidate when some apathetically ignore some of his words and actions as the President.

I’m not talking about Supreme Court nominations, the economy, and other issues the study also found were important to evangelicals. I’m talking about things that Christians should hold out as important matters—like honesty, character, and integrity.

If so many evangelicals held their noses voting from Trump, then why is it so difficult for some to criticize the President when he says or does something that doesn’t align with the evangelical worldview—or embodies common human decency?

Why is it hard to call a lie a lie, even when it comes from the West Wing? Why is it, as the data shows, we’ve lowered the bar over the years on character in a political leader’s personal life?

One group increasingly asking this question is African-American Christians. Trump has a 3% approval rating in the African-American community as a whole. This hardly fits the narrative that black unemployment falling to record lows makes him an endearing figure among African-Americans.

African-Americans have seen the tweets and heard the statements. Low IQ. Crazy. Unhinged. Dog. Crime loving. Disrespectful. These are just a few of the descriptive terms President Trump has used to describe Black men and women throughout his presidency. And this isn’t new behavior.

Before becoming the commander in chief, the Department of Justice sued Trump’s organization for discrimination against African-Americans in his renting practices. Trump also took out a full-page ad in four New York City newspapers calling for the death penalty for the Central Park Five—five minorities accused of raping a jogger in Central Park.

Even after the true perpetrator confessed to the crime and the men were exonerated, Trump maintained that their convictions should never have been vacated.

These kind of statements and actions are character issues. But according to the study’s data, not many White evangelicals are disturbed by President Trump’s comments about minorities.

When asked whether they agreed with the statement: “I am disturbed by comments President Trump has made about minorities,” 55% of evangelicals by belief agreed.

Why such a disparity? What does this mean?

This is not to say that white evangelicals don’t care at all about character for political leaders. Just that they have lowered the bar a bit. I fear that doing so has lowered the bar when it comes to race relations among Christians.

In the analysis, Stetzer and MacDonald explain from that data, “many evangelicals voted for Trump for the future while overlooking the present.” As such, I fear evangelicals have risked years of processing past racial trauma for a future devoid of Black voices among them.

While campaigning, Trump asked Black voters one simple question: “What do you have to lose [supporting me]?” I believe the clear, resounding answer among many African-American Christians who are evangelical by belief is simple: “Our dignity.”

John C. Richards Jr. is the Managing Director of the Billy Graham Center at Wheaton College. He is a graduate of Morehouse College and Howard University School of Law and serves on the Board of The Witness: A Black Christian Collective.

Join the conversation on Facebook
Tags:
None
Posted:
October 18, 2018