Gab is a cesspool of racism, not a free speech cause.
Ed Stetzer 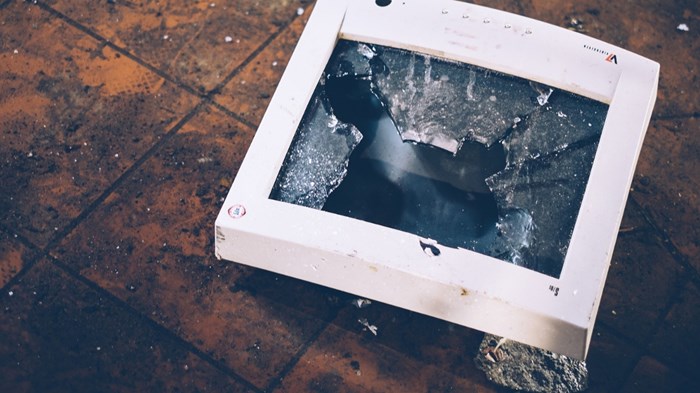 On Saturday, Robert Bowers entered the Tree of Life Synagogue, killing 11 people and injuring 6. During his attack, he continually shouted anti-Semitic statements, even during a dramatic gunfight with police. He told one officer, "They're committing genocide to my people. I just want to kill Jews."

This is horrific. My heart goes out to all of my Jewish friends who are grieving today. I grieve with you.

In light of yet another act of hate, we must understand and process the events leading up to the expression of such vitriolic hate. This depraved way of thinking and acting doesn't happen overnight, and it doesn't randomly appear. This type of hate forms over time and within a supportive community that normalizes and cultivates this evil into a fever pitch.

And if we think it can never happen to us, we ought just to look to Pittsburgh.

The role of Gab

In August 2016, the social network Gab was formed in response to censorship of hateful speech on popular social media sites like Twitter and Facebook. Popular alt-right leaders were being banned for harassment and hate speech, and Gab was formed with the misnomer of "protecting free speech."

For many people, they first heard of Gab this weekend.

But, long before Bowers picked up a gun and put Gab on the front page of the news, the social network was known for being a safe haven for neo-Nazis, those posting perverse pornograhic material, and others promoting hate speech against African Americans and Jews. Gab’s domain has been threatened and moved multiple times in 2016 and 2017, and Apple and Google have denied their app both on pornographic and hate speech grounds.

This is not a place where free speech is protected. Instead, it is a social media outlet for hateful, bigoted racists to share and encourage one another to maintain these beliefs.

Despite being dropped by their content hosting providers, Gab has still been posting defenses of its structure and defending its policies. They are re-tweeting quotes from Winston Churchill about fighting on the hills and the beaches, claiming their social media site did nothing wrong, and using the language of uprising.

And they post even as 11 people are laying in a morgue after being brutally murdered by one of their users who wallowed in the same anti-Semitic pool of waste that is so common at Gab.

We must courageously stand up to this hate and call it what it is: evil.

But people are influenced, encouraged or discouraged, validated or repudiated by the social circles in which they run. Society affirms or condemns behavior. We have all seen it happen, and perhaps even done it. Perhaps we don’t like when our ‘friends’ on Facebook continually post about something we don’t agree with. So we unfriend them. And then someone else posts a comment we are offended by. So we unfriend them.

Before we know it, we are in a bubble of like-mindedness which feeds and affirms our own beliefs and actions. Don’t get me wrong. I love having my Christian friends fill up my Twitter feed. It feeds my soul, giving me food for thought when the darkness of the world seems so blinding.

But, as I explain in Christians in the Age of Outrage, echo chambers amplify and then often radicalize those who are stuck in them. And when this echo chamber isolation works itself into fever pitch (like it did with Bowers), we can feel our opinions are normalized enough to act.

This normalization of hate is the underlying danger of social technology that allows us to choose what circles we run in and block anyone who believes differently than us. That's exactly what Gab does. It is not a place for discourse and discussion, but a place to spew hateful ideas and be encouraged in doing so.

You see, this is not the first time I’ve run into the cowards emboldened by Gab.

I have been on the receiving end of too many emails which have come from Gab enthusiasts. They post my email address at Gab, encourage their friends to jump on, and it begins.

Just a few days ago I tweeted out an example: 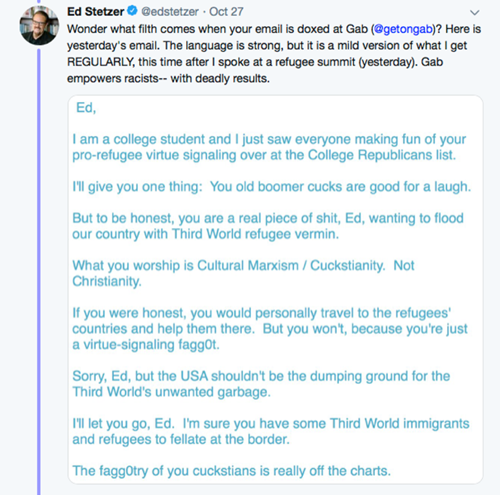 Really, this was a very mild version compared to ones I get which threaten me and my family. Indeed, words like these are very disconcerting, but when they have the potential to translate into action, that’s a whole different story.

And the end result is…

We cannot be in silos and echo chambers of thought and ideas. Like a tornado in a valley, being in a thought bubble turns normal ideas into extremes, creating an echo chamber where a fringe idea can be perceived as normal because the few people in your chosen circle all say and believe the same thing you do.

And the belief that we are right can drive outrage towards anyone who might feel differently. This is how someone like Robert Bowers can express his views, become validated and encouraged in his ideas, and then cultivate a more extreme ideology that reaches a point of no return.

We cannot dehumanize those who have a different political or social bent than we do. That’s what places like Gab do. This is not the free speech cause you are looking for, friends. This is a cesspool that festers hate until someone gets hurt.

We live in an age of outrage. But we can’t let that be the end of the story. We must shed the light. John 1:5 reminds us that “the light shines in the darkness, and the darkness has not overcome it.”

May the darkness of Gab flee away as we shed the light of truth.