Lausanne
Lausanne North America (L-NA) is committed to extending the influence and passion of Lausanne Movement by connecting influencers and ideas on mission and evangelism for Christ and His Kingdom. Read more from this column.
October 11, 2018Lausanne 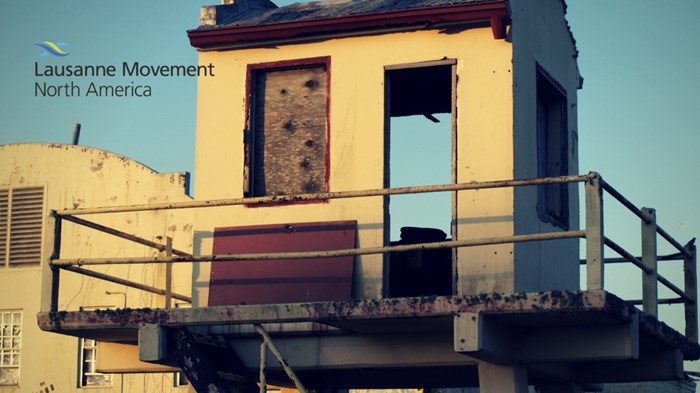 Image: via Lee Honeycutt/WikiCommons
The Billy Graham Centerand Lausanne North America host strategy groups which bring together key catalysts and leaders in select areas of mission and evangelism. One of these groups is the Lausanne Correctional Leaders Group. Kevin Brown serves as a member of this group.

Maximum security prisons, although located inside the United States, are a world apart, and are akin to a closed mission field.

The barriers enacted to ensure security are much like the prohibitive borders of a foreign country, preventing outside access to a world radically different from the one beyond the walls. Furthermore, the culture of prison is an alien one, replete with foodways, folkways, language, and behavioral expectations that define an alternative way of life requiring years of acclimation before one can begin to understand the unique challenges faced by the incarcerated.

Although the church is called to minister to the prisoner (i.e. Matt. 25:31-25 and Heb.13:3), accessing them is no easy feat. There are forms to be completed, security screenings to pass, guards at the gate and throughout the cellblocks, and a host of security features that limit in-depth relationships.

Once inside, the amount of time and access is limited, and understanding prison culture in a sufficient manner to translate the gospel into the inmate’s context can take years. In short, fulfilling the call is difficult for those entering from the outside.

Taking a cue from contemporary missiology, Christian universities and seminaries have begun envisioning a new way of reaching those inside such closed worlds.

Missiologist Ray Bakke has long contended that the ideal way to reach an indigenous population is not to import foreign missionaries, but rather to train and equip local leaders for the task. This way, the steep learning curve of acculturation is bypassed. Those who already understand the unique vagaries of life inside an alien culture already have many of the skills required to reach their fellow citizens, lacking only the training in gospel ministry.

In 1995, New Orleans Baptist Theological Seminary was invited by Warden Burl Cain of Angola Prison to begin such a training program. Once known as “The Bloodiest Prison in America,” Angola is built on an 18,000-acre property and houses 5,100 inmates on a massive campus that once was a plantation.

Cain envisioned a cadre of inmate ministers who could act as mentors and ministers who live and work daily inside the prison. Not hampered by the limitations imposed on missionaries from the outside, these men would have 24-hour access to the cellblocks. Many were lifers, which in Louisiana usually means without possibility of parole, whose entire lives would be spent dedicated to the work of sharing the gospel.

Because these men were already acculturated to prison life and understood the unique needs of others in their milieu, they could begin quickly and work efficiently.

And they were effective. In the intervening years the 308 graduates of the program have planted 30 churches inside Angola. There are 170 inmate ministers who act as “social mentors” paired with the newly-incarcerated to help them acclimate to prison life via conflict resolution, counseling, and sharing the gospel.

Pairs of graduates were sent to other Louisiana prisons to replicate the work there and to refer future students to the Angola Prison Seminary.

David Bosch (1997) writes that relevant missiology includes the ability to inculturate the gospel. He proposed five ways of contextualizing Christian missions in a way that is vital and reaches to the deep roots of a culture.

First, it respects the agents, elevating the indigenous to the level of fellow participants of the work rather than limiting them to helping roles.

Second, it is local and adopts itself to the unique context of the place.

Fourth, it is incarnational, being “born anew in each new context and culture” (p, 454). Fifth it is structured christologically, allowing Christ’s Good News to take root in a new context rather than importing outside ideas of what the culture should be.

Finally, it is all-embracing and reaches all aspects of culture rather than trying to isolate certain elements and “Christianizing” them (pp. 454-456).

The training program at Angola, and at several similar prisons throughout the country, have adapted these principles to equip inmates to infiltrate the prison and share the gospel in ways that are relevant and meaningful to the experience of prison life.

Prison reformation efforts might learn from their work. These men have adapted the life-changing message of the gospel to a violent culture, acting as agents of transformation in a world largely illegible to those beyond the walls. Rather than being adjuncts of prison chaplains, these men have forged a new missiological dynamic, placing Christ at the center of a milieu that once thought to be antagonistic to the Christian way of living, and doing so in a way that is unique to their world.

This model has been exported as well. Upon his retirement, Burl Cain began the Global Prison Seminaries Foundation to adapt the best practices of Angola to other prisons. His team travels extensively consulting with prison personnel and hosting an annual training conference where similar programs can network and learn from each other.

He envisions his work as a kind of prison reform. A comprehensive study of the program entitled “The Angola Prison Seminary: Effects of Faith-Based Ministry on Identity Transformation, Desistance, and Rehabilitation” chronicles its successes and suggests the model has transformative potential.

Angola, once the bloodiest prisons in America, has now become an exemplar of transformation. While it still remains largely unreachable by outsiders, the cadre of trained ministers inside its walls have made significant impact. Although it continues to be a world largely closed to outsiders, those inside have proven that training indigenous ministers of the gospel can have a powerful and transformative effect in a culture considered to be resistant to the claims of Christ.