Lausanne
Lausanne North America (L-NA) is committed to extending the influence and passion of Lausanne Movement by connecting influencers and ideas on mission and evangelism for Christ and His Kingdom. Read more from this column.
September 1, 2018Lausanne

Nominal Christians: Some Stats from the U.K. from Broad Application

How do we reach people who are nominally Christian?
Peter Brierley 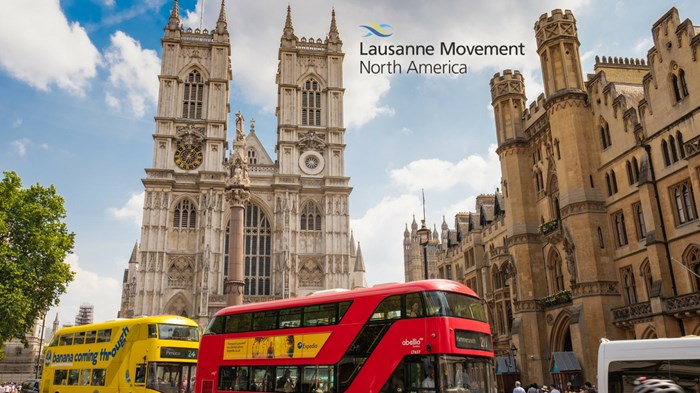 Image: via Creative Commons
Welcome to The Lausanne Link. It was less than a year ago that I took on the role of Regional Director for North America for Lausanne International. In this column, we will be sharing what’s going on with Lausanne North America (check out our website to stay up to date on that as well). The more I have gotten to know many connected with Lausanne International, the more I’ve appreciate the great history and continued gospel passion the network possesses. In The Lausanne Link, you will meet some of the key Lausanne players and hear what God is up to globally.

Today, I’m glad to welcome Peter Brierley to The Exchange. Peter has been handling church statistics for over 50 years. He has been responsible for two Christian research agencies and still produces key statistical analyses of Christian movements, especially in the U.K., and publishes the bulletin FutureFirst.

As a result of the Lausanne Consultation that took place in Pataya, Thailand, in June 1980, where many gathered to consider issues connected with global evangelization, several booklets emerged with titles such as Nominal Christians among Roman Catholics, ... among the Orthodox,... among Protestants, as well as others looking at Traditional Religionists in various countries and continents. The first International Lausanne Consultation on Nominalism took place in England in December 1998, and the Second Consultation was held in March 2018, in Rome.

The concepts of “nominal Christian” and “notional Christian” have been around for a long time, but have largely dropped from extensive use in the last few years. Nominal Christians were originally defined as those people who “were church members and believed in God but who never attended church(except perhaps at Christmas or Easter),”while notional Christians were those who “believed in God but who never attended church and do not necessarily make any effort to follow the Christian ethic (perhaps because they confuse ‘Christianity’ with ‘Britishness’).”

Numbers for both were estimated along the following lines for the U.K.:

The forecast 2020 figure is based in part on the number of church funerals and the age of churchgoers, and the number likely to join the church in the 10 years leading up to 2020.

While global equivalents for the numbers in Table 1 are not generally available, some have been published for some of the countries in Europe. The publication of the first two parts of the European Churches Handbook¹ enabled figures for 1980 and 1990 along the lines of Table 1 to be compiled, and are reproduced below in Table 2. Figures for later years are unfortunately not available. The figures are collected into three broad groups of countries: Western Europe, Scandinavia, and North Western Europe. 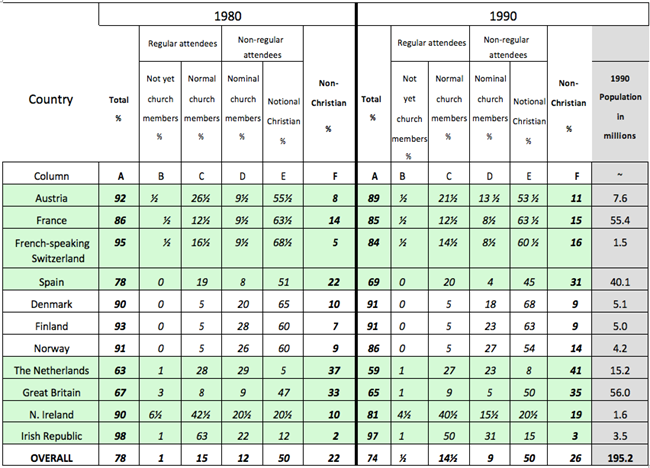 The Table shows much larger proportions of nominal Christians in Scandinavia, along with the Netherlands and both parts of Ireland, than in the other western countries of Europe including Britain. The situation did not change greatly in the 1980s. Notional Christians on the other hand were more uniformly distributed across these 11 countries except for the Netherlands and the Republic of Ireland. The letters in the columns correspond to the same letters and columns in Table 1.

Reasons for the trends

These trends are well known, but interpretations differ. In the last 30 years, many explanations of what is happening have been suggested including:

Although the concepts of nominalism and nationalism may first have been tabulated in the 1980s and applied to Christianity, the reality has existed for longer than the last 40 years. All religions have a group of those who seem to be at the periphery or tail end of belief. It is belief rather than attendance which describes a nominal or notional person, a less committed or personal belief in one’s religion, an unwillingness to accept all its various formularies.

In Christian terms, this will probably mean not reading or even accepting the Bible as the authoritative foundation for belief.

‘How do we reach people who are nominal Christians?’ was the question the Lausanne Movement asked back in 1980 and is worth re-asking today. The answers are much the same now as then, and much the same as seeking to reach anyone with the good news of Jesus Christ – explaining the forgiveness he has to offer through his death by repentance of sins and re-birth by the Holy Spirit, whether that be presented in traditional church, Fresh Expressions, Messy Church, in “reaching” courses such as Alpha and Christianity Explored, or in mega events such as J John’s in the Emirates football stadium outreach in the UK in 2017.

¹European Churches Handbook, Part 1 (Denmark, Finland, France, French-speaking Switzerland, Norway and the UK) and Part 2 (Austria, Netherlands, N Ireland, Republic of Ireland and Spain), published by MARC Europe, Bromley, Kent in 1991 and 1992 respectively, based on the publication of individual church handbooks for each of these countries. The third volume was never published.

Nominal Christians: Some Stats from the U.K. from Broad Application

Nominal Christians: Some Stats from the U.K. from ...