The fact that Jesus climbed out of that tomb changes everything.
Ed Stetzer and Gabriella Siefert 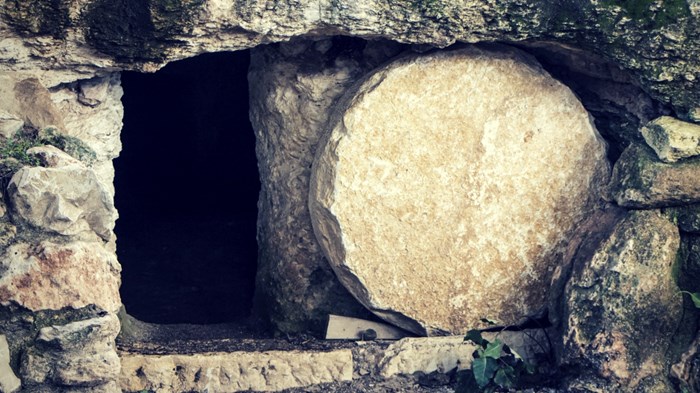 There are so many ways we could talk about the significance of Easter morning—particularly, the meaning of Christ’s resurrection from the grave.

With no hesitation, believers will tell you that the fact that Jesus walked out of that tomb changes everything. That very moment—the morning of the resurrection—is at the foundation of all those that follow it. The coming of the Holy Spirit, Paul’s road to Damascus conversion, and the ministry of the church for centuries thereafter all hinge upon the reality of a risen Savior.

It, indeed, is the center of history. If it happened—and it did—it changes everything.

That’s the title of my message this morning at The Moody Church, “This Changes Everything.” And, that’s not an overstatement. When the first iPhone was introduced that was there motto as well, but Steve Jobs is gone now, there are lots of other phones now, and the world did not change that much.

But, when Jesus walked out of the tomb, that did change everything.

When people think of the resurrection, though, often they contemplate the forgiveness of sins. Perhaps they remember God’s sovereignty and power. Maybe they reflect on his goodness. But the language used in churches and among bodies of believers often also includes particular reference to Christ’s victory over death.

As he leaves the grave, Jesus defeats that which all the Roman soldiers, scoffing Jews, and religious leaders thought would defeat him.

But all this talk about death can often seem so morbid on a day of the year that’s become commercialized through the use of pastel pinks and purples and little chocolate bunny rabbits.

Obviously, this is a time for celebration—Jesus did, in fact, rise again and later ascend into heaven securing for us a hope and a future of eternity spent with him. It’s a joyful occasion and one that’s more than worth celebrating!

Death of the Lead

But on this Easter morning—with all the eggs and bunnies—I can’t help but ponder why the salvation story first involved the death of its main character.

Why did God design this to be so?

As I write this, I have two friends, younger than I, who are clinging to life. Their prospects are not good. Doctors have used words like, “not much time left.”

It’s not yet their time.

Death is real and it still hurts. We don’t want to die and we don’t want our friends to die.

Yet, the story of Easter, really, is a story steeped in perhaps the most troubling part of the human experience: death itself. It’s the one thing that unites people across historical contexts, cultural barriers, and whole continents—everyone, no matter who they are, eventually dies.

In a piece in The Atlantic, Professor and Vice Provost at the University of Pennsylvania writes:

Americans seem to be obsessed with exercising, doing mental puzzles, consuming various juice and protein concoctions, sticking to strict diets, and popping vitamins and supplements, all in a valiant effort to cheat death and prolong life as long as possible. This has become so pervasive that it now defines a cultural type: what I call the American immortal.

No matter how advanced societies across the globe have progressed since the dawn of time—vitamins, diets, surgeries and all—death remains humankind’s one undefeatable foe. Try as we might to immortalize ourselves, scientists, medical practitioners, mathematicians and the like have yet to craft a path forward for humanity that doesn’t end in the grave.

All of us really are, as Athanasius writes in On the Incarnation, “due to die.” And this death, ultimately, is not just the result of old age or sickness, but of the sin that surrounds us in our ever-broken world. Unlike the rest of our culture chasing immortality, Christians are often fixated on this sin problem above all else.

But it strikes me that Christians so often explain away death as if it were merely God’s chosen method of punishment for sin. Death, in this narrative, is no enemy on its own but only as it pertains to the depth of human brokenness and rebellion against God.

But as we’ve bought into this explanation, perhaps we’ve missed that fact that sin and death are actually quite intertwined. It appears that each of us has not only a sin problem to solve, but a death problem as well.

And it seems that Jesus came to address them both because both, in fact, were hurting us—body and soul.

Centuries before the first Easter morning, the Lord promised the prophet Hosea: “I will deliver this people from the power of the grave;I will redeem them from death” (Hosea 13:14). As it turns out, God’s chosen method of deliverance was himself—it was God who came to defeat that which had always defeated us.

But as Fleming Rutledge writes in her book The Crucifixion: Understanding the Death of Jesus Christ, it wasn’t just that Jesus took to the cross and walked out of the tomb on the third day, it was how he did those things that also matters.

Jesus was “put to death publicly, deliberately, and with impunity” and “his execution was carried out by all the best people, representatives of the highest religious and governmental authorities” (73). To speak of crucifixion in general is “to speak of a slave’s death” (75-76).

This, she writes, was “the destiny chosen by the Creator and Lord of the universe: the death of a nobody” (76).

But something made all the difference: this crucified nobody was God in the flesh. And what first looked like one of the lowliest, most degrading, and humiliating events ever recorded in human history turned into a moment of celebration on Easter morning.

Death has been defeated and in Christ, we too will one day share in this victory over the grave. Not because of our own efforts to save ourselves; no health craze or self-preservation will do.

But only because of the empty tomb.

Praise be to God.