Send Institute
The Send Institute is a think tank for evangelism and church planting in North America. It is a partnership of the Wheaton College Billy Graham Center and the North American Mission Board. Read more from this column.
August 30, 2019Send Institute 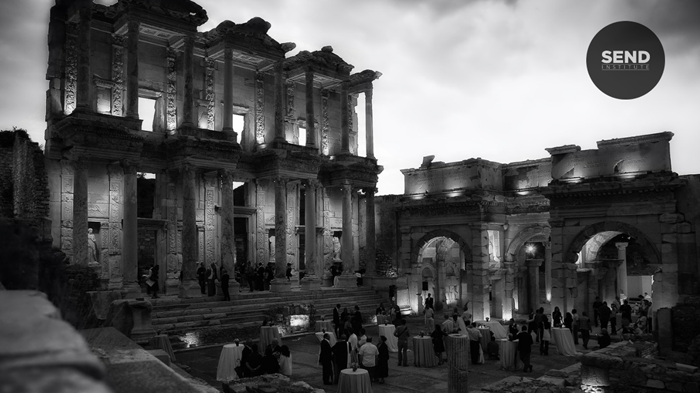 Multiethnic churches have in a way become incubators for ethnogenesis, providing an avenue where Americans are encouraged to explore and negotiate their racial and ethnic identity through theological formation and biblical community.

The essence of the oneness of God’s people amid diversity is a biblical theme expressed throughout both the Old and New Testaments, but the ecclesiological and eschatological vision is perhaps made most explicit in the Apostle Paul’s epistle to the Ephesians. Andrew Walls writes,

The Ephesian letter is not about cultural homogeneity; cultural diversity had already been built into the church by the decision not to enforce the Torah. It is a celebration of the union of irreconcilable entities, the breaking down of the wall of partition, brought about by Christ’s death (Eph. 2:13-18). Believers from the different communities are different bricks being used for the construction of a single building—a temple where the One God would live. (Eph. 2:19-22)[1]

Paul’s revelation to the Ephesians was that embedded in their local churches was the revealed mystery that Christ is known to a greater extent, and even perhaps to the fullest stature, when displayed by both Jew and Greek living in unity for the gospel.

The eschatological vision of the true Israel had now been made complete in Christ by uniting Jew and Gentile, where congregations like the ones in Ephesus were an instance and an embodiment of this vision.

In another one of Andrew Wall’s work,The Missionary Movement in Christian History: Studies in the Transmission of Faith, he puts forth two principles that represent opposing tendencies in cultural engagement that can tend to generate tension, yet both originate in the gospel: the indigenizing principle and the pilgrim principle.

The indigenizing principle comes from understanding that God accepts us “as we are,” which includes not just our individual selves, but also the cultural context from which we come from.

The pilgrim principle says that God in Christ not only takes people as they are, but he also takes them in order to transform them into what he wants them to be. Where the indigenizing principle particularizes the faith of the Christian to their culture and group, the pilgrim principle universalizes it.

The believer is introduced to more than what he or she has ever known, which includes meeting members of the family of faith, some of whom will be very different in background.[3]

Each marker is stated from the perspective of an individual rather than being representative of an entire ethnic group so as to reflect the personal journey of meaningful integration into a multiethnic congregation. However, they do not discount the reality of collective experience and its impact on how someone perceives membership and belonging.

Marker #1: The congregation fosters ongoing growth in the person’s awareness and acceptance of their ethnicity, encouraging them to grow in their uniqueness in Christ.

The first marker is an implication from Wall’s point that “the very height of Christ’s full stature is reached only by the coming together of the different cultural entities into the body of Christ”[4]. However, this does not mean that people should bring just a portion of who they are to the community. They are not supposed to bring only the parts that they think are compatible with others, expecting that the sum of these portions will somehow achieve the height of Christ’s full stature.

In Wall’s vision, to achieve full stature, people of the congregation are encouraged to bring all of who they are, particularly the parts of themselves which are integral to their personhood.

A male and female cannot subdue their gender and expect to fully contribute. In the same way, a person should not be asked to subdue their ethnic identity if the congregation is wanting to achieve its maximum glory in Christ.

Marker #2: The congregation accepts the person’s ethnic perspective as normative and valuable to its development as a theological and discipleship community.

The second indigenizing marker is formulated by Wall’s challenge to the theological development of the modern church,

The Ephesian question at the Ephesian moment is whether or not the church in all its diversity will demonstrate its unity by the interactive participation of all its culture-specific segments, the interactive participation that is to be expected in a functioning body. Will the body of Christ be realized or fractured in this new Ephesian moment? Realization will have both theological and economic consequences.[5]

While Walls may be addressing a larger hermeneutical community beyond one local church, any ecclesial body can make the application at their macro, meso, or micro-level. A community of diverse Christians whose doctrinal and practical theology has little input from its congregants will have little impact on its congregants.

That sort of community may only be capable of regurgitating inherited philosophical formulations rather than being capable of self-theologizing. The point here is not to promote novel and fringe theologies for the sake of it, but rather to encourage mature believers to contribute from their ethnic locality to the theological imagination and repertoire of the congregation.

Marker #3: The congregation sees the completed work of Christ as the means to regulate the person’s ethnic pride, combating ethnocentrism and elitism.

The third marker follows Wall’s postulation that none of us can reach Christ’s completion on our own because we need each other’s vision to “correct, enlarge, and focus our own.” Salvation history is not complete in Abraham or in Jewish history.

Neither was it complete in the inclusion of the Greeks. Even in the first century, there was no single original form of Christianity, and throughout history, there has never been one [6]. And to date, it is not yet complete in the African, Asian, and Latin American churches. Each generation contains communities of believers on a pilgrimage to become more complete in Christ in the context of the other.

Therefore, there is no room for a preferred ethnic ruling class within the body of Christ. This is a consistent theme in Paul’s writing as he opposed even his apostolic peers when they caved into the carnal pressures of ethnic elitism and the discrimination of the Gentiles at Antioch (Galatians 2:11-14).

Marker #4: The congregation challenges the person to regularly give up their preferences in order to live peaceably and to reflect the gospel to the world.

Lastly, as a pilgrim who is becoming more like Christ in a multiethnic congregation, they should find themselves freely contextualizing their life to maximize the exposure of the gospel to an unbelieving world.

Paul’s versatility in becoming “all things to all people so that by all possible means I might save some” (1 Cor. 9:22) speaks not of a compulsion to be like others, but of the freedom to not be enslaved to his own cultural preferences.

In Christ, Paul was given many modes and many expressions so that he could easily sacrifice a preference if it meant winning someone over with the gospel message. The paradox is that by living down your “Jewishness” sometimes in order to win over a Gentile to Christ, it is not self-detrimental and, in fact, it puts on display how strong your “Jewishness” really is—because a weaker “Jew” probably could not do that.

A congregation in which your identity is bent without being broken so that others may be welcomed in says that its members must have meaningful ethnic belonging.

Multiethnic congregations should be pliable by definition and should not be places of rigid ethnic culture. They can be incubators in which people simultaneously grow in the particulars of how Christian faith can look in their own “skin” and in the pilgrimage of being transformed by how it can also look in the skin of others.

The process of ethnic reasoning is how ethnicity is lived out at the individual level. And the further the gospel is driven down to the individual level, where Christ makes sense of someone’s lived ethnic experience and reinterprets it more beautifully than anthropology or sociology ever could, then the person not only experiences meaningful belonging to a congregation, but they are also becoming a member of the people that God has purchased for himself in Christ where the Spirit dwells as a holy temple.

[1] Walls, Andrew. 2002. The Cross-Cultural Process in Christian History: Studies in the Transmission and Appropriation of Faith. Maryknoll, N.Y: Orbis Books, 77.